Four-way talks on Ukraine′s multiple identity | World | Breaking news and perspectives from around the globe | DW | 17.04.2014

Talks between Ukraine, Russia, the EU and the US in Geneva are set to deescalate the crisis in Ukraine. But it seems unlikely that international diplomacy will resolve questions over Ukraine's national identity. 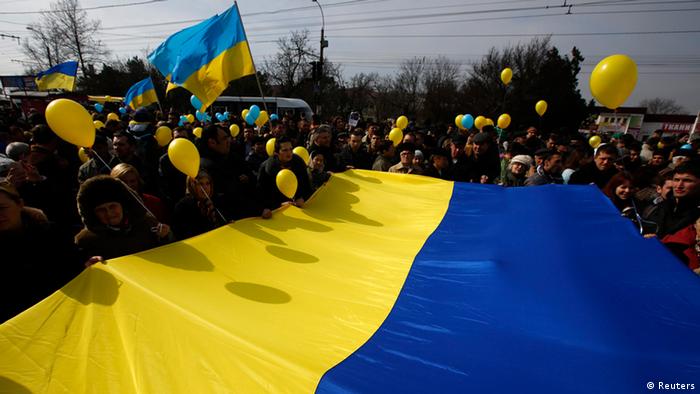 Against the backdrop of NATO's decision to boost its forces in Eastern Europe, the escalation of violence on the ground in eastern Ukraine and calls for Ukrainian federalization, four-way talks in Geneva between Russia, Ukraine, the EU and the US are underway. However, expectations of finding a diplomatic path forward for the Ukraine crisis remain low.

When US Secretary of State John Kerry was asked on Thursday whether he expected any progress during the talks, he is reported to have shrugged. Last week, Assistant Secretary of State Victoria Nuland expressed that sentiment in words: "I have to say that we don't have high expectations for these talks." 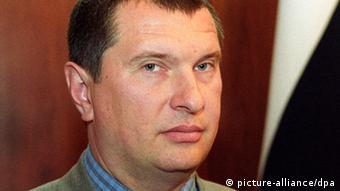 There has been talk of sanctions against Igor Setchin, the head of Russian state oil company Rosneft

Fittingly, on Tuesday, the US State Department said that it anticipates more Ukraine-related sanctions on Russia but that action was likely to take place after the meeting in Geneva.

Both Christian Caryl, an Eastern Europe specialist and senior fellow at the Legatum Institute, and Glen Howard, the president of the US Jamestown Foundation, agree that further sanctions could be beneficial.

According to Howard, the West needs to "send some messages to Putin that this is not business as usual" particularly by decreasing its energy dependency on Russia and helping Ukraine do the same. Currently 30 percent of the EU's natural gas imports and 35 percent of its oil supplies come from Russia.

But the two experts differ on how much Western measures can really influence events in Ukraine.

Caryl says that even with sanctions and potential Western assistance for Ukraine, "one of the big problems here is I'm not sure there's that much the West can do. Ukraine is not a NATO member, it's much easier for the Russians to go in there and interfere and stir things up than it is for the Europeans."

Howard on the other hand is sure that the West needs to step up its response to the crisis in Ukraine. "By saying 'we're not going to do anything at all about this area,' you're not helping the situation," he says.

The situation in many eastern Ukrainian cities is volatile

"You have to offer some level of military assistance to the Ukraine," Howard adds, explaining that he is not necessarily referring to "boots on the ground" but instead means providing military equipment and sharing intelligence.

Not black and white

But though diplomatic posturing makes the situation seem clear-cut, it is far from simple on the ground, as Christian Caryl explains. He spoke to DW after a trip to the mostly Russian-speaking city of Odessa in southern Ukraine. Caryl explained that the population is not always clearly pro-Russian and anti-Ukrainian or vice versa.

"You hear all of this sentiment that is quite skeptical of the central government in Ukraine and quite positive towards Russia. And then after people have unloaded themselves of that they'll say 'but actually, I would still like Ukraine to exist as a sovereign state. I don't want any outside governments telling us what to do here,'" he says.

"I have encountered very little expression of outright desire to just be swallowed up by Russia. And the polls also suggest that this is a very common attitude," Caryl adds. 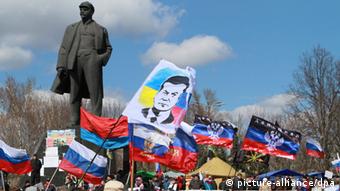 Instead, one of the most commonly discussed solutions for Ukraine's future has been federalization. On Monday, the pro-Western interim government in Kyiv proposed a referendum on such a move to decentralize the country on May 25, at the same time as the presidential election. Russia has frequently demanded federalization.

But as Christian Caryl explains, "federalization has always been a touchy word in Ukraine precisely because for the government in Kyiv, it has often been feared to mean much greater interference by Russia in Ukraine's internal affairs." He thinks that Russia could be hoping for "a series of autonomous regions or even perhaps something like a new country formed out of the southern and eastern parts of Ukraine, which it would not annex but which would essentially be a kind of protectorate."

"So the tricky part is how you define federalization. And perhaps there is a formula that will satisfy both Kyiv and Moscow. I'm not holding my breath," he says.

But he adds that despite reservations, "it's quite clear that Ukraine probably can't go on as the very centralized kind of state that it's been over the past twenty years." Caryl thinks the Ukrainian government is likely to have to devolve some authority to local governments to address some of the grievances behind separatism. Activists in Donetsk, for example, proclaimed the formation of a "Donetsk People's Republic" on April 6.

When it comes to the talks in Geneva, however, the "f-word" is clearly taboo. On Tuesday, Ukrainian UN representative Yury Klimenko announced that his delegation would not discuss federalization. "The issue is not on the agenda," Klimenko said.

Russia warns against use of force against protesters in Ukraine

Russia's foreign minister has said intervention by Ukrainian authorities to stop pro-Russian protesters in eastern Ukraine would set back diplomatic talks. Ukraine has announced an "anti-terrorist" operation in the east. (15.04.2014)

US warns Russia over 'escalatory moves' in Ukraine

The US has warned Russian President Vladimir Putin to stop "overtly or covertly" trying to destabilize Ukraine. In a bid to ease the crisis, the US and Russia have discussed holding a possible meeting with top diplomats. (07.04.2014)