India's Hindu nationalists are celebrating Donald Trump's surprising victory in the US presidential election. Trump is being hailed as a "hero" for taking a tough line against Islamists and Muslim immigrants in the US. 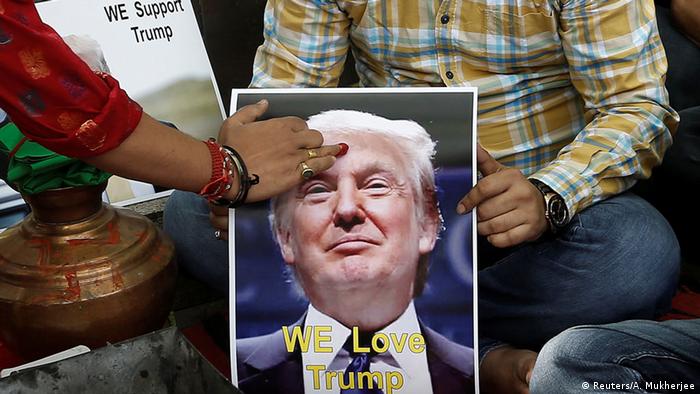 Hindu nationalists were praying for Donald Trump's victory in the US presidential election, offering havans (ritual burning) around the now president-elect's gigantic portraits.

NATO's Afghanistan commander, US General John Nicholson, has said he needs 12,000 soldiers next year to continue his mission with "moderate risk." It is unclear if president-elect Trump would listen to this request. (10.11.2016)

On November 8, the day of the election, a three-hour prayer ceremony was organized at the Saidham Temple in Mumbai by the Hindu Sena, a right-wing organization that also celebrated Trump's birthday in June this year.

As soon as the media confirmed Trump's victory over his Democratic rival Hillary Clinton, scores of Hindu Sena supporters took to the streets, dancing and distributing sweets.

"He (Trump) is the savior. He will save the world from Islamic terror," Vishnu Gupta, president of the Hindu Sena, told DW. "Now that he will be the president of the United States, we hope he will act against Islamists. India has long suffered the Islamic terror. We have organized celebratory rallies in Mumbai and the capital New Delhi to honor the president-elect," Gupta added.

The ceremonies in many parts of the country were financed by wealthy Non-Resident Indians (NRIs), mostly Hindus based in the US who voted for Trump.

The Vishwa Hindu Parishad, a Hindu nationalist organization, also praised Trump's anti-terror rhetoric, including his controversial proposal to temporarily ban Muslims from travelling to the US.

"I am glad the world has realized that the Hindu way of life is supreme," Vinod Bansal, the outfit's spokesperson, told DW. 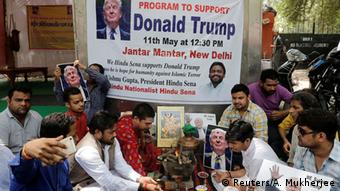 Hindu nationalists say they hope Trump will act against Islamists

Last month, Trump held a large gathering in New Jersey ahead of the Hindu festival of Diwali. "I am a big fan of the Hindus," Trump told the participants.

The Hindu extremists' support and fanfare for Trump is not surprising as the billionaire politician espouses many of the ideals they hold dear.

"Trump's call for stopping illegal migration, building a wall on the US-Mexico border, his tirade against Islamic terrorism, and his vision of 'Make America Great Again' has strong resonance with what the ruling Bharatiya Janata Party (BJP) and some of its affiliates believe in," Manish Puri, a sociology student in New Delhi, told DW.

"It is almost similar to Prime Minister Narendra Modi's 'Make in India' business campaign," he added.

Experts also point out to the similarities in Trump's and Modi's campaigning styles.

"Modi also ran his election campaign on playing up divisive issues. Supporters of both Modi and Trump are those who feel left out of the system or who are unhappy with the status quo," political science professor Sudha Pai told DW.

Prime Minister Modi was quick to congratulate Trump on his historic victory and expressed hope that India-US ties would be "taken to new heights under the new presidency." 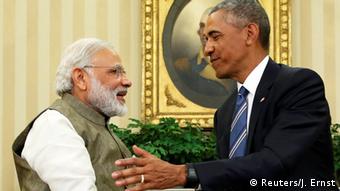 The real-estate tycoon has repeatedly said he would boost his country's economic and defense relations with India. He also has personal business ties with the South Asian nation. His Trump Organization is involved in two major luxury real estate projects in the cities of Mumbai and Pune, both in the western state of Mahrashtra. In 2013, the Trump Organization tied up with the Lodha Group, real-estate developers in Mumbai, and in 2014 with the Panchshil Group in Pune for the residential projects that are being marketed as "Trump Towers."

Trump is also known for his skepticism of Pakistan-based Islamists. Therefore, many analysts foresee a new era of US-India alliance during Trump's upcoming presidency. The fact that some Hindu extremists are almost worshipping Trump should thus not come as a surprise to anyone.

Many left-leaning Indians pointed out that the legendary singer had supported PM Narendra Modi, while some Hindu extremists accused Bollywood star Shah Rukh Khan, a Muslim, of "spitting" on Mangeshkar at her funeral.