Con artists have tricked hundreds of young Nigerians into traveling to Russia thinking they'd become professional footballers. Alas, when they arrive, their hopes are dashed and they find themselves with nowhere to go. 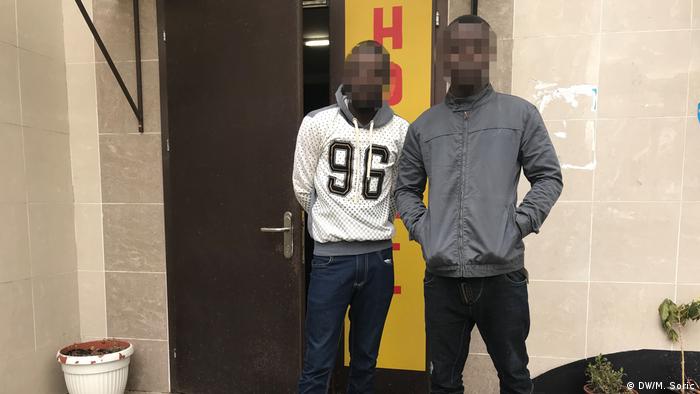 Two Nigerian brothers in their early 20s say they have been conned into coming to Russia with false hopes of becoming professional footballers. Embarrassed, they don't want to reveal their names. Back home, in the megacity of Lagos, they were approached by fellow Nigerians and told that, should their dreams of soccer stardom not work out, they would easily find other well-paying jobs in Russia. The younger of the brothers had experience playing for Nigerian amateur squads. So, naturally, both were elated by the prospect of becoming full-time athletes in Russia.

The brothers entered Russia using FAN IDs, which the government issued for foreigners traveling to attend the FIFA World Cup. They contain personal data and function as visa substitutes during the tournament.

But, after touching down in Moscow, the brothers soon realized that they had been tricked. "In Nigeria, we were told to call this phone number once in Russia — but nobody picked up on the other end," the younger recalls. They then spent three days in a hotel until they ran out of money. They contacted the Nigerian Embassy for help, but were turned away. "Then we went to a mosque," the younger remembers. They were not allowed to stay overnight but received food from the imam. They then slept rough in Moscow parks. "Suddenly, my suitcase was gone," one of them recalls. So they returned to the Nigerian Embassy once more and were told to contact the Russian NGO Alternativa, which works with victims of human smuggling and enslavement and is financed solely through donations. Fortunately, Alternativa was able to help the brothers by getting them in touch with Murat Harsiyev and Danier Tagiev, who run a small hostel on the outskirts of Moscow. As pious Muslims, they let the brothers stay for free.

Harsiyev says he knows all too well what it's like to be in a foreign land, feel unwelcome and have no money. He hails from the northern Caucasus and experienced the wars that raged in Chechnya during the 1990s. He experienced firsthand what it means to flee. Today, he works as businessman in Moscow. Tagiev, who is from the city of Samarkand in Uzbekistan, and Harsiyev help fellow Muslims however they can. So they will let the brothers stay in their hostel until their FAN IDs expire as the football World Cup winds down.

Today, four more Nigerians have come to Alternativa's offices. They, too, were conned into coming to Russia thinking that they would become professional footballers or start other lucrative jobs. Now, they're stranded without a proper visa and without speaking a word of Russian. They are extremely thankful that Alternativa is temporarily paying for their accommodation in a hostel.

"Unfortunately, we can't help everyone," says 32-year-old Julia Siluyanova, who runs Alternativa's Moscow office. Ever since the World Cup began, distraught Nigerians have been coming, she says. The embassy does little to help and simply passes stranded people on to Alternativa, she adds: "They rely on us without doing anything themselves."

One of the Nigerians at Alternativa's offices admits that he feels ashamed of his country's embassy: "I would never have expected such behavior."

Siluyanova thinks only a small fraction of the conned Nigerians in Russia have contacted her NGO. She estimates that about 200 individuals are affected by the scam altogether: "Many are still hopeful of becoming professional footballers or landing some other job." But, without the necessary papers, they're not allowed to work. Many stranded Nigerians only have fake flight tickets — so getting home is out of the question.

At least the current group of people coming to Alternativa's Moscow office for help have passports, Siluyanova says. Siluyanova and 10 other volunteers are working feverishly to find a solution. So far, Russia's authorities have remained passive. The FAN IDs are valid until July 23. And then these unfortunate Nigerians will be expected to repatriate.