Following AfD gains, some in Left want to rethink refugees | Germany| News and in-depth reporting from Berlin and beyond | DW | 29.09.2017

Following AfD gains, some in Left want to rethink refugees

The Left party bled voters to the Alternative for Germany in the Bundestag elections. Could the country's most progressive party now take an anti-refugee line? 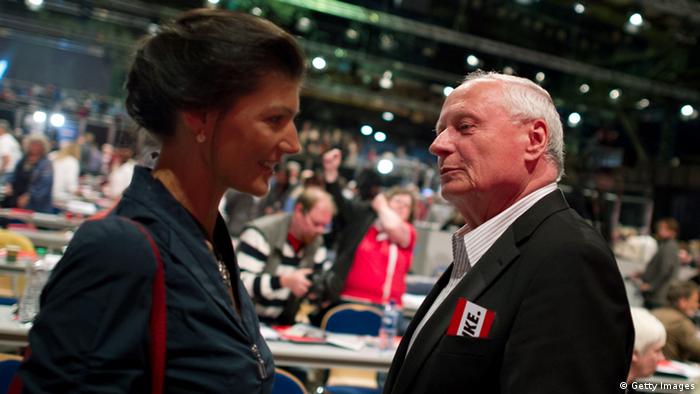 In a Facebook post published Tuesday, the former German finance minister — who split the center-left Social Democrats when he left them in 2005 — threatened to divide the party he helped found by tackling the Left's "internal party conflicts" head-on.

The trigger for Lafontaine's social media polemic was the Left's poor showing with working-class and unemployed voters, with the socialists scoring only 10 percent and 11 percent among those groups, respectively.

"The key to this lack of support among those at the bottom end of the income scale is the failed 'refugee policy,'" Lafontaine wrote before taking up an argument that might have appealed to many who voted for the Alternative for Germany (AfD): "Only a minority (of refugees) manage to get the several thousand euros together to pay the traffickers to get to Europe and mainly to Germany. Millions of war refugees vegetate in the camps, many more millions of people have no chance at all of leaving their homes because of hunger and illness." He was suggesting that, rather than let in refugees, Germany pay for better internment camps abroad — though that leaves the question of what to do with displaced people who do travel to Europe. "A left-wing party can't suspend the principle of social justice while it is helping people in an emergency situation," he added. 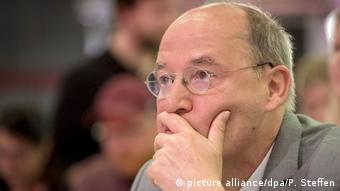 Gysi distanced himself from the Left's rightward shift

Sahra Wagenknecht (left in photo), one of the Left party's two top election candidates — and Lafontaine's wife — made a similar point on her own Facebook page on Wednesday. "Especially in the East, there is no small overlap between our potential voters and those of the AfD," she wrote. "They aren't racists, but people who are dissatisfied, who are angry, and who feel disadvantaged. In the future it must be our much clearer goal to win these people for the Left party!"

There was a swift response from others in the party. "Those who take a rightward course on the refugee question risk the credibility of the Left," party leader Katja Kipping told the German news agency DPA. "We defend the right to asylum, need a sustainable fight against the causes for fleeing, and want a social offensive that benefits everyone — natives as well as refugees."

Writing in the Neues Deutschland newspaper, former party leader Gregor Gysi made a similar point, saying that if the Left were to vote to take the line that Lafontaine and Wagenknecht want, "it would no longer be my party."

Stefan Liebich, a Left Bundestag deputy who successfully defended his directly elected seat in eastern Berlin this week, was keen to point out that such arguments are common within democratic parties. "There are people among our members and our voters who don't share our position on refugee policy," he said. "Where there are debates, there need to be debates. But the majority of the party is very clear: Unlike the Green party, we were the only party who always said no to tightening asylum laws." 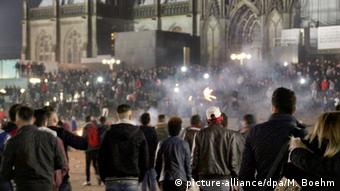 Liebich acknowledged that the Left had lost voters to the AfD, but also pointed out that the party did slightly better in this election than it had in 2013, taking 9.2 percent of the national vote, up from 8.6 percent last time. Many pundits considered that a respectable result considering the insurgence of the Alternative for Germany (AfD) and the resurgence of the pro-business Free Democrats (FDP).

The deputy was also reluctant to sideline Lafontaine. "He has taken that position for a long time, and I think that position is wrong, but you can't ban discussions in a party, and you shouldn't," Liebich said.

Gero Neugebauer, a political scientist at Berlin's Free University, suggested that Lafontaine's strategy is misguided in any case. It's more than a matter of the working class opting for the AfD, he argued. "The voters in East Germany who didn't go to the Left, but to the AfD, are from very different social classes," he said. "It wasn't just economic policy that played a role. It was also cultural aspects, if you consider that xenophobia is very high in many parts of eastern Germany. I think Lafontaine is looking at it too narrowly."

"There are a lot of AfD voters who are in good economic situation who don't complain about lack of income," Neugebauer said. "They don't have all this competition on the housing market or the job market — for them the cultural aspect is much more important."

The right-wing AfD has entered Germany's parliament for the first time in September's election. It came in second strongest party in its stronghold of Pasewalk, which locals say is a 'victim of German reunification.' (27.09.2017)