A flight simulator has caught fire in an office building at Frankfurt airport in western Germany. The blaze caused 16 million euros ($16,732,000) worth of damage. 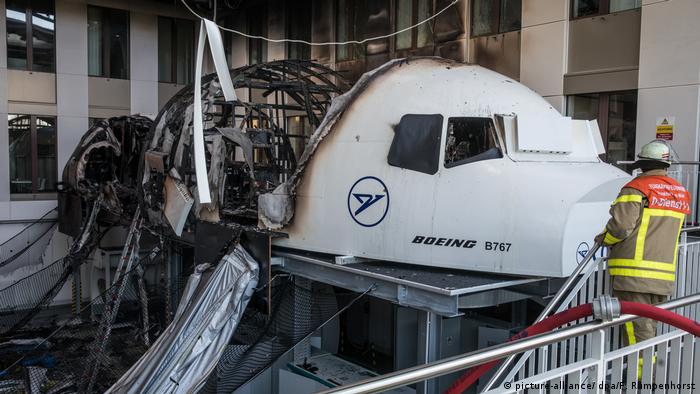 Frankfurt wants to cover 100 percent of its energy supply with renewables by 2050. The city is already setting an example with energy-efficient building but its international airport could torpedo its goals. (21.11.2016)

All clear at Frankfurt airport after security breach

Frankfurt airport has returned to normal after security breach forced a partial evacuation. Airport officials said a person passed a security checkpoint without being screened. (31.08.2016)

Some 200 people were forced to evacuate an office building at Frankfurt International Airport on Thursday after a flight simulator set ablaze.

Fire fighters managed to extinguish the flames within 45 minutes. One person was taken to a hospital due to smoke inhalation.

According to German airline Condor, which owns the building where the fire occurred, other people were also examined at the hospital as a precautionary measure.

"The course of the incident was likely a technical fault," German police said. The simulator, much of which burned out, contained a replica passenger cabin.

US signs 5G security deal with Bulgaria, North Macedonia, and Kosovo 2h ago

First nest of 'murder hornets' found in the US 2h ago