Barack Obama, Jimmy Carter, George H. W. Bush, Bill Clinton and George W. Bush have delivered a message of unity. The former presidents have called on their fellow citizens to help the victims of a series of hurricanes. 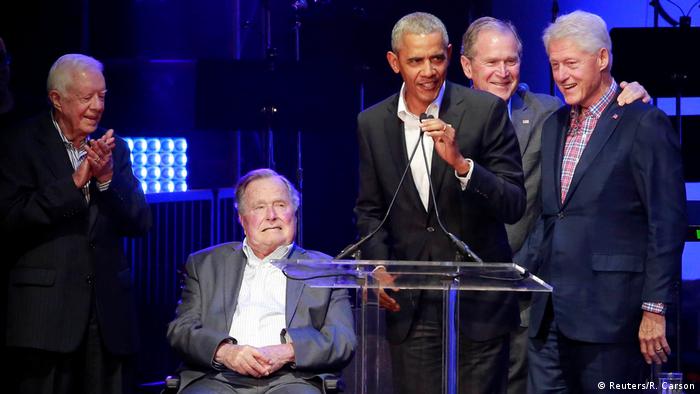 All five living former US Presidents came together on Saturday night to promote a message of hope and unity at a relief concert for the victims of hurricanes that recently ravaged parts of southern US and the Caribbean.

"As former presidents, we wanted to help our fellow Americans begin to recover," said Barack Obama as the concert began at Texas A&M University in College Station, Texas. Obama served as president between 2009 and 2017.

"All of us on this stage here tonight could not be prouder of the response of Americans. When they see their neighbors and they see their friends, they see strangers in need, Americans step up."

"The heart of America, without regard to race or religion or political party, is greater than our problems," said Clinton.

"People are hurtin' down here, but as one Texan put it, we've got more love in Texas than water," W. Bush said.

Hurricanes Harvey, Irma and Maria left death and destruction in their wake as they slammed through parts of Texas, Florida, Puerto Rico and the US Virgin Islands in August and September.

The concert was part of an appeal that has raised $31 million (€26 million) from 80,000 donors since September 7. Calling for more donations, Carter said, "let's all work together and make America a great volunteer nation."

Current President Donald Trump thanked his predecessors in televised remarks, saying "this wonderful effort reminds us that we truly are one nation under God, all unified by our values and devotion to one another."

"Pain is such an equalizer. And in a time of catastrophe, we all put our differences aside and we come together, 'cause we need each other, or we can't survive," Lady Gaga said.

The event was reportedly the first time the five former presidents had been together since they attended a ceremony in 2013 marking the opening of the George W. Bush Presidential Library in Dallas, Texas.

Puerto Rico after the Storm