Fischer Goes on Offensive in Visa Affair | Germany | News and in-depth reporting from Berlin and beyond | DW | 26.02.2005

German Foreign Minister Joschka Fischer admitted Saturday he made mistakes in an affair involving the misuse of visas by criminal human traffickers from Eastern Europe, but he remained defiant amid calls to resign. 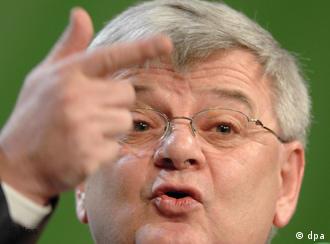 "I've made mistakes," Fischer told a Cologne meeting of his Greens Party, the junior members of Chancellor Gerhard Schröder's center-left coalition. "But that has nothing to do with the party," he added. Fischer is the Greens' most high-profile figure.

Fischer, whose poll ratings have dived over the controversy, acknowledged that under his foreign ministry stewardship since 1998 two decisions had been made that were to damaging visa policy. "I did not react with sufficient speed or firmness, or fully enough as the responsible minister," he said.

Germany's conservative opposition claims lack of vigilance by Fischer meant "hundreds of thousands" of clandestine immigrants from the former Soviet bloc -- Ukraine in particular -- were able to enter Germany between 2000 and 2003 after tourist visa criteria were relaxed, thereby allegedly fostering organized crime, a submerged economy and prostitution.

Angela Merkel, head of the conservative Christian Democrats, said on Saturday Fischer had failed to uphold the duties of his office and therefore had to go. "If he had an ounce of self-respect left he'd know what he has to do," Merkel said. "Plenty of ministers have resigned over less."

But Fischer attacked the conservatives for opportunistically labeling all Eastern Europeans as lawbreakers. "As far as I'm concerned, they can demand my resignation, but they must stop stigmatizing an entire people as criminals just for an election campaign!"

Fischer's speech to the Greens in North Rhine-Westphalia was keenly awaited by many hoping to gauge his strategy before he testifies in the coming weeks before a parliamentary investigation into the affair. His feisty reply energized both those in his party and members of Schröder's Social Democrats (SPD).

Fischer has the full backing of Schröder, who this weekend again dismissed demands by the opposition for his resignation. In an interview with the Frankfurt Allgemeine Sonntagszeitung newspaper, Schröder made clear Fischer was going nowhere: "The foreign minister will remain the foreign minister!" 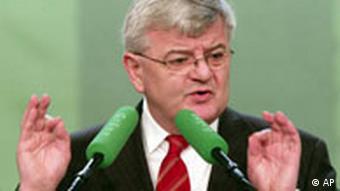 But Fischer lost his standing as Germany's most popular politician for the first time in three years in a key poll Friday amid the ongoing scandal. The "Politbarometer" published by public broadcaster ZDF showed that the affair over the abuse of tourist was taking a political toll.

After more than three years leading the ranks of Germany's "top 10 most important political officials", Fischer slipped to second place with a rating of 0.8, down by half from the 1.6 he tallied last month. Five would the highest score in a scale that assesses an official's public profile, image and likability.

He was bested by Lower Saxony state premier Christian Wulff of the conservative opposition Christian Democrats, who has been considered a dark-horse candidate for the chancellery in next year's general election. Wulff benefited from Fischer's slide, but also from a poll quirk that eliminates the responses of people who said they did not know the politician well enough to judge. Half the respondents gave this response for Wulff.

The visa scandal comes at an inopportune time for Schröder's government, with his Social Democrats (SPD) unable to break a marathon losing streak in a series of state elections. The SPD suffered a surprise loss in Schleswig-Holstein last Sunday and will face a crucial test in a poll in the most populous state of North Rhine-Westphalia on May 22.

Until then, it will be scrambling to control the political damage from the visa affair.

Opinion: Bringing the Greens Back to Earth

At stake in the visa affair is the integrity of Germany's much-loved Foreign Minister Joschka Fischer. DW's Jens Thurau wonders if the scandal might prove to be his political undoing -- and his party's. (Feb. 16, 2005)

When Will Fischer Take the Hot Seat?

These are tough times for Joschka Fischer. Germany's most popular politician is facing stiff criticism for his responsibility in an illegal immigration affair. His fate depends on the outcome of a raging political war. (Feb. 17, 2005)

German Foreign Minister Joschka Fischer Monday accepted responsibility for a scandal involving the abuse of visas to bring drugs and prostitutes into the country. But he denied the government was encouraging criminality. (Feb. 14, 2005)