Fischer Accepts Blame for Visa Scandal | Europe | News and current affairs from around the continent | DW | 14.02.2005

German Foreign Minister Joschka Fischer Monday accepted responsibility for a scandal involving the abuse of visas to bring drugs and prostitutes into the country. But he denied the government was encouraging criminality. 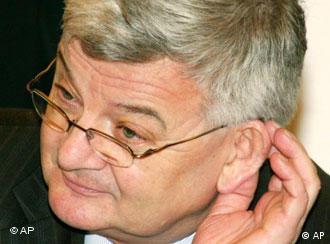 The opposition is calling for Joschka Fischer's resignation

Fischer told reporters staked outside his Greens party headquarters that he accepted the blame for any "mistakes" made after his ministry in 1999 eased conditions for citizens of the former Soviet bloc to get German visas.

"I carry the political responsibility for possible oversights or mistakes by my staff," said Fischer, who is also deputy chancellor. "That is the responsibility of a minister."

But he lashed out at the conservative opposition, which he accused of launching a campaign against him, saying that the initial liberalization of the visa rules had been introduced on their watch. Chancellor Gerhard Schröder's center-left coalition of Social Democrats and Greens came to power in 1998.

The opposition says the 1999 edict helped "hundreds of thousands" of illegal immigrants from Eastern Europe to enter the country on tourist visas between 2000 and 2003, many of them helped by organized criminals. Many are suspected to be drug traffickers or women forced into prostitution in Germany.

In 2001, the German embassy in Kiev, Ukraine approved 400,000 Visas, an unusually high number considering the 190 German embassies worldwide issue three million visas each year on average. However, Fischer said the edict had nothing to do with criminal activity at the embassy in Kiev.

Following the resignation Friday of his deputy, Ludger Volmer, over the scandal, conservatives over the weekend called for Fischer, often rated Germany's most popular politician, to step down. Christian Democratic leader Angela Merkel said the opposition would go over the charges "piece by piece" in parliamentary investigative hearings.

"He talks of political responsibility but instead of taking it he pushes it off on his employees," Merkel said.

But the Greens member of the parliamentary investigation, Jerzy Montag, said an earlier easing of visa requirement was more responsible for the abuse by criminals, rather than the latest edict from the Foreign Ministry. He said in the early 1990s a so-called "Travel Agency" policy that did away with personal visa approval by embassy personnel was to blame.

And Schröder, who owes his re-election in 2002 to the strong showing of Fischer's Greens party, said he would stand by his minister. "Joschka Fischer has my full trust and my full support," Schröder told reporters before a meeting of his Social Democrats.

Fischer returned early Saturday from a nine-day tour of Australia, New Zealand and Southeast Asia during which he refused to comment on the brewing affair in Berlin.

The British government is in disarray after its Immigration Minister Beverley Hughes resigned on Thursday amid accusations of a cover up surrounding an alleged eastern European visa scam. (Feb. 4, 2004)

Germany's foreign ministry has pledged to investigate the procedures that allowed a suspected Algerian terrorist to be granted a visa to live in Germany and remain there after his name appeared on an EU terror list. (July 13, 2004)

Are German diplomats too lax in issuing visas? Opposition politicians think so and want the foreign minister to appear before parliamentary hearings on the issue. (Jan. 21, 2005)