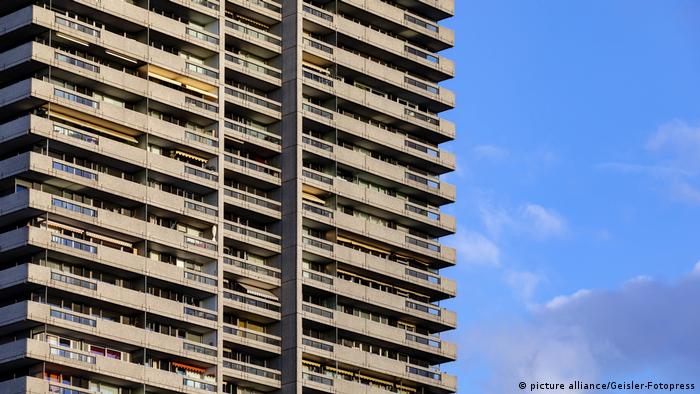 Germany’s Frankfurter Allgemeine Zeitung newspaper published two headlines side by side: "48% of households in Germany are now property owners," said one, while the other announced that "Property Prices Climb Higher."

The Federal Bureau for Statistics published figures on Tuesday that, at the start of 2018, "nearly half of households can call their house their own." After years of economic stability, weathering storms that sunk other countries, you might expect the German homeownership "ship" to finally be setting sail, but the opposite is true.

"It’s striking — Germany is one of Europe’s wealthiest nations, but we have very low homeownership rates," housing specialist Pekka Sanger from the German Economic Institute, told DW, pointing to a strong social net and pension system that meant there was little need to buy housing in the past.

Other factors that have historically fueled rental demand include high interest rates, demands for huge deposits from banks and a cultural stigma against debt (there is no word for mortgage in the German language) linked to historical events like hyperinflation in the 1920s and the postwar rebuilding of the country.

Priced out despite low interest rates

These days, low interest rates and an urge not to be crowded out of the housing market mean that it makes sense to buy in many German cities. Interest rates have dropped from 4.33% to 1.65% in a decade. But, despite a surge in property prices, with Berlin becoming the world's fastest growing real estate market last year, the expected increase in buyers has not manifested itself.

Sanger thinks that "housing might become as important as in other countries because of changing demographics like an aging population" but points out that homeownership is actually falling by some measures in Germany, despite conditions that make it sensible in some cities.

In Germany, private companies own huge numbers of properties and rent them out. This worked well for a long time but, as the country urbanized, rental prices in desirable locations have rocketed. Rental prices have risen by more than 50% in nine cities since 2005, according to the Central Real Estate Committee (ZIA).

Deutsche Bank, meanwhile, said in a recent report that "we expect that, during the coming years, house prices will continue to rise in all metropolitan areas covered" while the ZIA warned that the construction of new housing is being "totally neglected."

Only Bulgaria, Greece and Denmark have it worse.

The lack of affordable housing has had a terrible effect on those on the lowest incomes. Germany is now one of Europe’s worst offenders for so-called housing cost overburden — where people spend more than 40% of their income on housing.

Some 16% of the population fits this category, the fourth highest in the EU and worse than Turkey. Although tenants’ rights meant that the large rental sector has been protected from the worst effects of high prices in comparison to other countries, who knows how long that will last.

"We are seeing a decline in first-time home buyers. Low-interest rates are beneficial to property buyers because they make mortgages more attractive, but this doesn’t affect the cost of a downpayment, which is also linked to property prices," said Sanger.

"We saw an increase in the number of first-time homebuyers in 2011 when there was a similarly-low interest rate, but this time, the cost of a deposit has risen and taken ownership out of the range of what most younger people can afford," he told DW.

German political leaders disagree on whether the government should tackle soaring rents in big cities by expropriating housing. One conservative politician says the proposal smacks of East Germany-style socialism. (08.04.2019)

Rents have risen sharply in Berlin and other German cities during the past decade. At a Berlin protest, housing activists demanded the government hit back by expropriating real estate from big rental companies. (06.04.2019)