German political leaders disagree on whether the government should tackle soaring rents in big cities by expropriating housing. One conservative politician says the proposal smacks of East Germany-style socialism. 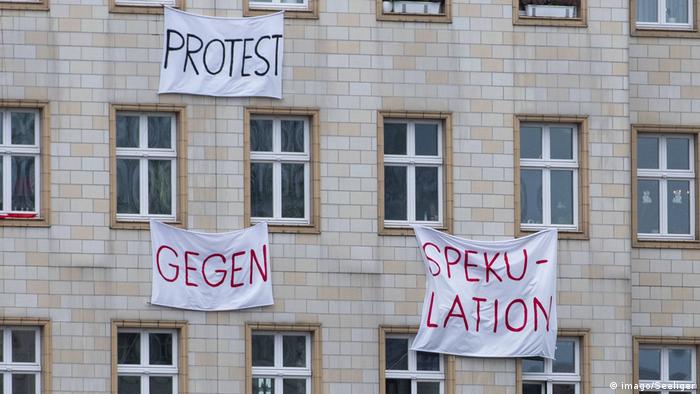 Germany's political parties weighed in on the debate over rising rents on Sunday, a day after nationwide demonstrations against "rental insanity" triggered calls for expropriating housing from major rental companies.

Green party co-leader Robert Habeck told German newspaper Welt am Sonntag that it was conceivable to crack down on big housing firms that hold tracts of land inactive. If they don't build new housing or refuse to sell the land back to the city, they can be expropriated, Habeck said.

Rents have been soaring in Germany's biggest cities, but the problem has been particularly acute in Berlin, which has seen average rents double in the past decade. The capital is, however, far from the most expensive city in Germany. Rents in Munich, Frankfurt and Stuttgart as well as other smaller cities are still much dearer.

Habeck said Germany's constitution permits expropriation through the power of eminent domain. "It would be absurd if we only used this to build new highways, but not to take action against the rampant housing shortage," he added.

Katja Kipping, head of Germany's socialist Left party, said she not only supported expropriations, but went as far as saying the government should also be able to confiscate property from housing firms.

But Germany's conservative parties were swift to condemn calls for expropriation.

Markus Söder, the head of Bavaria's conservative CSU party, told the Münchner Merkur media group that expropriations were "socialist ideas" that had no place in the public discourse.

Free Democratic Party (FDP) leader Christian Lindner told the Rheinische Post newspaper that "only more apartments" and not "ideas from the GDR" — the former East Germany — would help solve the problem of rising rents. Expropriations would also harm private investments in housing, he added.

Far-right AfD party co-leader Alice Weidel criticized the Green party, saying their support for expropriations indicated that they were on their way to embracing full-blown communism.

While she said she understood public "anger" at rising rents, the head of center-left SPD, Andrea Nahles, told the Bild am Sonntag newspaper that she opposed expropriations because they would take years and wouldn't help create new housing.

Activists say the move would crack down on speculation by cutting rental companies to size and stripping them of the influence they wield on determining market prices.

But housing associations and developers disagree. They argue that expropriation won't solve the problem and have pushed instead for more housing construction and, in particular, subsidized housing projects.

If the petition gathers 20,000 signatures, Berlin's government would be required to consider the initiative.

If citizens disagree with the government's initial response, they can force a referendum on the issue by gathering another 170,000 signatures by February 2020.