Can this week's climate talks in Bonn come up with a draft text for COP 21 in Paris to suit all parties? DW talks to UN climate chief Christiana Figueres. 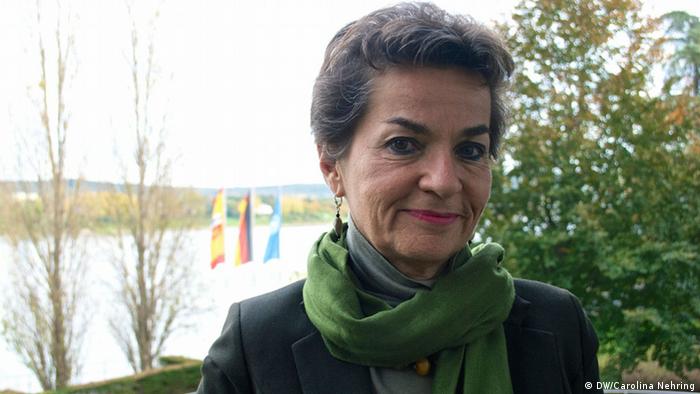 UN diplomats are meeting in Bonn this week for climate change talks. The five-day session is the last meeting before heads of states and ministers gather in Paris in December to try to sign a deal to combat the threat posed by global climate change.

DW: How important are these talks in Bonn in preparing the way for the Paris climate conference?

Christiana Figueres: These talks are critically important on the path toward Paris because it is the last formal session where countries formally get together to listen to each other and to come to common ground. We do not expect a final solution here, but we certainly expect that they will be coming closer together.

Developing countries have expressed dissatisfaction over the latest draft of the global climate agreement, saying many of the core issues have been removed. How confident are you that the talks this week will result in a draft text for Paris that all parties accept?

We heard first from the developing countries that they were unhappy with the content of the draft text. The fact is that all countries were very appreciative and happy that it was a short, concise and comprehensive text. However, we also heard from developing and developed countries that they felt the text had gone from being too detailed to being too short. The exercise yesterday was the first attempt to find a happy middle ground between too much and too little. That will now be the work of this week.

Expectations for the Paris climate summit, COP 21, are high. How optimistic are you that a global climate agreement will be reached?

We continue to be very optimistic. The fact is that every single country continues to increase its political will and its commitment to reach a Paris agreement, otherwise they wouldn't be working here very hard this week.

It's not a scenario that we entertain.

Will the climate agreement still go ahead, even if some countries don't agree to it?

This is an agreement that is so fundamental, and that is going to have such an effect on the global economy, that it is necessary for all countries to feel comfortable with it.

Some developing and emerging nations still need a lot of convincing to agree to cut their emissions. What has to happen to bring them all on board?

The fact is that we already have 154 national climate change plans, so that means there are at least 154 countries that have already identified where they would have opportunities for reducing their emissions. Many of them also see where they're going to need to adapt to the negative effects of climate change. So that's already 86 percent of global emissions, 75 percent of countries, and we expect that we will be receiving more of these national climate change plans throughout the next months.

What strategies have you found helpful in getting world leaders to take action on climate change?

It's actually pretty simple. The "magic wand", if there were one, is for each of these countries to understand that this is not just a global agenda. Most of the measures of climate action, if not all of them, also have a very fundamental, beneficial effect on the countries presenting them. So the very positive overlap between national development agenda and global agenda is actually what is moving countries forward.

How can poorer countries be better assisted in their transition to low-carbon economies?

I think the poorest countries need two very urgent supports. The first and the most urgent is support for the adaptation that they are already engaging in, because all of these countries are already being affected negatively by climate change. And they certainly need more urgent support, both financial as well as technical, for the adaptation measures that they are already facing. They are receiving some, but clearly not enough. The second is that many of these countries realize that they do not want to be stuck in a global economy that belongs in the last century. They want to move forward with the rest of the countries, and that means decoupling their economic growth from greenhouse gas emissions. And that decoupling is also something that needs financial and technical support.

What are the key political issues left to negotiate?

The whole package. I wouldn't say that there is one issue that is already clear and done. The fact is that in these negotiations, things move with each other in consonance. So you do not have a prematurely ripe decision or agreement on any of the issues. All issues remain on the table and they are all moving forward together. That means mitigation, or reduction of emissions, adaptation, finance, technology, capacity building, transparency, to name the six most salient of the texts, are still all on the table.

Do you think you can convince all of the world's leaders to act on climate change?

They're convincing themselves, because they are truly understanding that it is in their benefit to do so. The incentive is further security, further safety. They do not want to be exposed to the very difficult physical risks that would be upon them should we not address climate change, and should we go to scenarios of really unprecedented natural disasters. So they are understanding that a) it is in their interests to minimize their individual and collective risk. But b) they also have a huge incentive to work toward better health conditions, more energy security, more food security, more water security – all of these benefits that come with climate change action.

Your job is, in part, to try to convince 195 states to make a transition from fossil fuels to renewable energy. How does it feel to have this level of responsibility?

Current pledges are not enough to limit a rise in temperature to 2 degrees Celsius - seen as the threshold for damaging weather events. If we do get an agreement in Paris, what else needs to happen to meet the 2 degree target?

Is the Climate Summit in Paris in December really our last hope to save the world from catastrophic climate change?

It is the last opportunity to do so in a cost effective manner. Global greenhouse gas emissions in theory could continue to increase over the next few decades. But then, we will have no other option but to reduce global greenhouse emissions at a much higher cost.

To date, looking back over the past decades, what have we achieved on the issue of climate? What did you learn from Copenhagen?

We learnt a lot from Copenhagen: certainly how not to keep delegates out in the cold for five hours waiting to get in, so that doesn't happen anymore. But the most fundamental lesson from Copenhagen is that action on climate change needs to make sense from a national perspective. It cannot be only the global arguments. The global arguments stay on the table and they are shared by all, but it does need to make sense from a national perspective.

Christiana Figueres has been the Executive Secretary of the UN Framework Convention on Climate Change (UNFCCC) since July 2010. She has directed five consecutive Conferences of the Parties, and is now charged with the intergovernmental process to deliver the 2015 Paris agreement on climate change.