Ahead of December's climate change conference, experts have warned about the effects of climate change on world security - and how fighting global warming can help foster peace. Elizabeth Bryant reports from Paris. 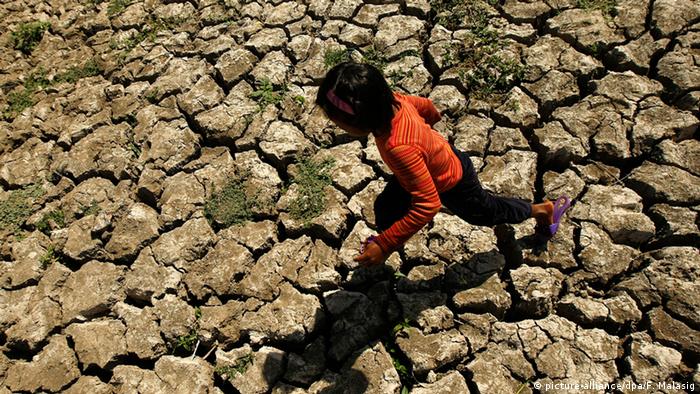 Encroaching desert and Boko Haram extremists. A punishing drought in Syria, pushing 1 million people to flee the countryside to cities already choked with war refugees. Scarce rains and sandstorms in China, forcing the country to import massive amounts of wheat…and sparking a spike in global prices that fed Egypt's 2011 revolution.

Just weeks before a key climate change conference in Paris, experts and defense ministers from more than a dozen nations gathered Wednesday for a rare meeting in the French capital to confront the toxic effects of climate change on world security.

"Climate change is a threat to peace," said French Foreign Minister Laurent Fabius, describing a world where floods, desertification and droughts will intensify conflicts over ever-scarcer resources and spark a massive wave of environmental refugees.

The meeting included ministers from Chad, Niger, Haiti and the Seychelles, countries that are experiencing firsthand the threats and fallout of conflicts and climate-influenced catastrophes.

Benjamin Bewa-Nyog Kunbuor, Ghana's defense minister, spoke of forests where he used to play as a child now reduced to desert, rivers drying up and the country's tree cover shrinking to just a fraction of its size compared with half a century ago.

"Terrorism is significant, but naked hunger is as significant as terrorism," he said. "And the relationship between terrorist activities and naked hunger are obvious. If you look at the vectors of recruitment into terrorist cells, most of the most vulnerable are hunger-prone areas."

Nearly 150 nations have pledged to curb greenhouse gas emissions ahead of December's climate change summit in Paris. If carried through, experts say those cuts could limit global warming to 3 degrees Celsius (5.4 degrees Fahrenheit) - 1 degree beyond the limit at which they warn the planet could face catastrophic weather events. 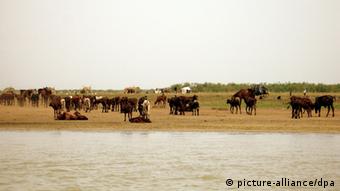 Also addressing Wednesday's meeting at the Military School in Paris, Niger's Defense Minister Mahamadou Karidjo described the nexus between climate change and the tangle of militant groups threatening the country, including Boko Haram, al-Qaida and the "Islamic State" group. All are directly linked to ever-scarcer resources, he said, as a creeping desert and vanishing arable land threaten the lives of millions of people.

The surface area of Lake Chad - a lifeline that provides water to the four Sahel countries it straddles, including Niger - has shrunk 90 percent from its size in 1962 due to drying conditions. Scarce water has helped to intensify poverty, poverty, hunger and insecurity, Karidjo said - making people living on its shores more vulnerable to Boko Haram extremists.

"The youth no longer listen to their parents. Increasingly, they become targets for Boko Haram terrorists," he said. "They become drugged, indoctrinated and return to their own villages to sow terror and insecurity."

For his part, Defense Minister Lener Renauld of Haiti, which is threatened by massive deforestation and rising sea levels as temperatures warm, said he was convinced "there's no plan B" to fighting climate change.

Even as experts say climate change is likely to intensify conflicts over increasingly scarce resources, they suggest mechanisms to fight global warming can help foster peace.

Officials described Wednesday's meeting in Paris as a first, but it comes as security risks are being increasingly factored into the climate change debate. 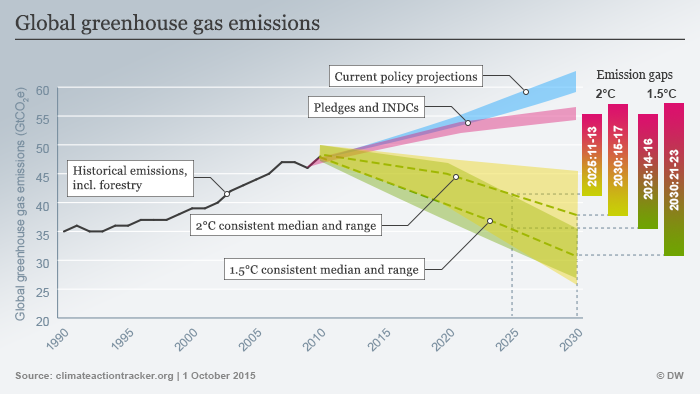 In July, a report by the US Defense Department called climate change an "urgent and growing threat" to national security, and this week NATO's parliament demanded stronger action by member states to tackle a warming planet.

In France, EELV Green Party Senator Leila Aichi organized a meeting this week between top military brass and environmentalists. French defense officials are lagging behind the Pentagon in confronting the risks and implications of climate change, she said, but they're heading in the right direction.

"They're much more responsive on the question than politicians because they think in the long-term," she said. "The army is also in much closer contact with nature."

But, she added, security risks are not fully factored into climate change talks taking place ahead the Paris summit. Nor has the French military formally incorporated climate change into its defense strategy.

Olivier Dobbels, co-founder of Polarisk, a London-based consulting group that explores future risks in the Arctic and Antarctica, said he was doubtful about the military's ability to provide answers to climate change.

"They're prepared from an operational standpoint," Dobbels said, drawing parallels between the military's response to climate change and peacekeeping operations in Africa and elsewhere. "Peace enforcement, civilian protection, yes. But from a strategic standpoint, they don't have a strategy to bring solutions to climate change."

Greenland and its colonial big brother Denmark are appealing to the European Union to lift the ban on commercial seal hunting. Greenlanders fear the end of a way of life. Malcolm Brabant reports from Ilulissat. (13.04.2015)