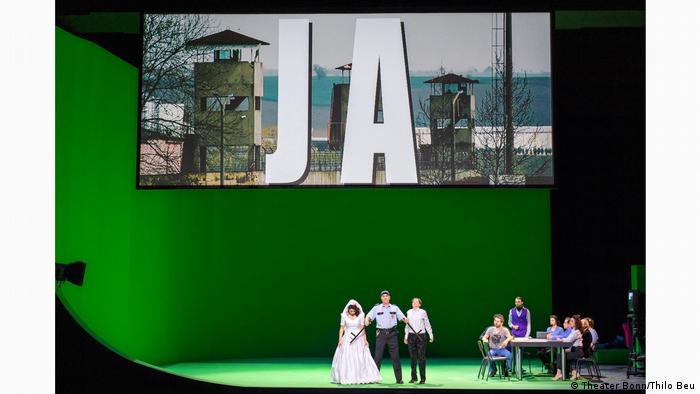 It's amazing how well-suited the overture is as an accompaniment to film sequences. Peaceful landscapes on the big screen alternate with street protests. Exploding grenades and shots from tanks are perfectly timed to the drum roll of the timpani. In the jubilant final bars, rubber tube boats wash ashore and refugees are welcomed in their new homeland.

That this is no orthodox performance of Fidelio is clear from the beginning: The messages are not hidden or coded but have great clarity.

Between arias, activists read out texts about the current situation with political prisoners in Turkey, music and recitations accompanied by images on the big screen. Turkish President Recep Tayyip Erdogan is portrayed as a sultan, Turkish tanks Made in Germany cross over into northern Syria — and there are more street protests. 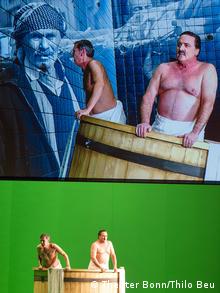 What "Fidelio" is about

First, a look at the original. Ludwig van Beethoven's music is often described as political, which is difficult to prove in his symphonies and chamber music. But his sole opera Fidelio is clearly a plea for freedom of expression and an indictment of despotism and oppression.

The central character is a woman, Leonore, who clads herself as a man and seeks to gain the trust of a prison overseer. She wants to find her husband, Florestan, a political prisoner whose only crime was to have openly spoken his mind about the powers that be.

Because he's hanging on to life longer than his planned quick death by starvation, the governor decides to personally slay Florestan. Leonore alias Fidelio courageously intervenes, and at the right moment: The minister enters the scene, the governor is deposed, the prisoners released. At the end, all hail the main figure's courage and loyalty.

Beethoven struggled with the story and the operatic genre as a whole. After the 1805 premiere in Vienna, he worked it over several times — three different versions of the overture alone exist — before presenting the final version in 1814.

It's a piece that poses a challenge for modern-day stage directors too: serious subject matter but with a happy ending and with spoken texts that move the plot forward but interrupt the flow of the music.

Director Volker Lösch, who was able to present his take of the work on January 1 at the Bonn Opera in the first new production of "Fidelio" in the Beethoven anniversary year, opted for a radical approach, dispensing with the spoken texts in the score and updating the work through texts read out by observers and sometimes direct victims of state persecution in Turkey. The texts "complement and extend the issues in the plot," Lösch explained to DW. "Hope, freedom struggle, incarceration, torture and freedom." 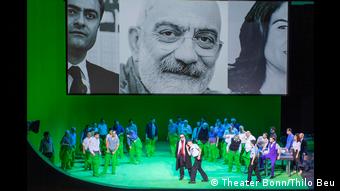 Then and now, in stark juxtaposition

One learns about Hakan Akay, imprisoned in Turkey 27 years ago, released and now active on behalf of his brother, who is still in prison and suffering from cancer. Or of the Turkish journalist and writer Ahmet Altan, imprisoned since 2018 and awarded Germany's Scholl Prize for his book Ich werde die Welt nie wiedersehen (I Will Never See the World Again).

About forty percent of the performance at the Bonn Opera was dedicated to the spoken word, most of it read at a table off to one side of the stage. Later the contemporary witnesses were incorporated into the action.

Too much of a good thing? some viewers asked cautiously. With the central issue being the conflict between the Turkish state and the country's Kurdish minority, even the foundation of the state itself was called into question — which could mobilize Turkish nationalists and Erdogan supporters. Will future performances take place under police protection? One hopes not.

The remaining sixty percent — Beethoven's music — stood out for its outstanding cast, headed by Thomas Mohr in the role of Florestan. Martina Welschenbach's dramatic soprano was well suited to the role of Leonore. Dirk Kaftan vigorously led the Beethoven Orchestra Bonn with sharp accents and moments of repose and beauty such as in the quartet of the characters Marzelline, Fidelio, Rocco and Jaquino. 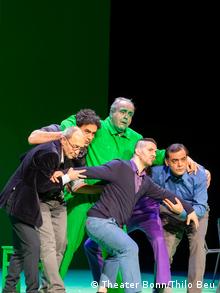 The activitists are later integrated into the action, here with Thomas Mohr as Fidelio (in green)

All that takes place in an elaborate mise-en-scene which, as Bonn Theater Director Bernhard Helmich explained at the subsequent celebration, was only possible through the support of the BTHVN Anniversary Society.

The predominant green backdrop had to do with the use of green filters, as is customary in television productions: green objects disappear before the corresponding background, including green-clad persons, symbolizing political prisoners who are invisible to the public at large.

"This is theater for everyone," says Lösch, "requiring no prior information or education." Nothing required, that is, but patience: the relentless protests left this viewer taking several deep breaths.

Can Beethoven's optimistic, utopian concept work today? "Of course," says Lösch. "If you take a stand for others, as does Leonore, whose activity on behalf of an individual transforms society, it's possible to strengthen a free, democratic culture."

The message was anything but subtle. "For us, that means intervening, taking a stand, standing up for our values and fighting for them if necessary. We all have to get involved politically if we are not to turn the world over to the opponents of freedom," Lösch says.

During the final chorus, the cast holds up posters in a plea for the release of prisoners. Names are named, and postcards addressed to various politicians are available in the foyer. They include Chancellor Angela Merkel, accompanied by a demand for a moratorium on weapon exports to Turkey. At this point, applause breaks out in the audience — even while the music is still playing.

As relevant as all this is, the only thing missing was the opportunity to hear two sides of an issue. Rather than leaving room for discussion, the presentation polarizes. It's difficult to imagine how it could contribute to a peaceful exchange of opinions in the Turkish-Kurdish conflict that is sometimes played out on German streets. 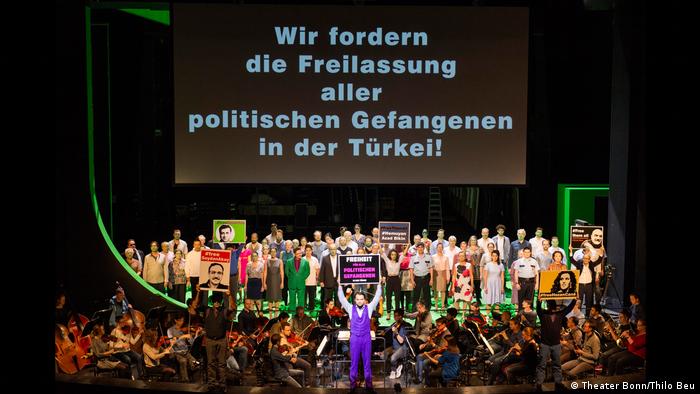 Nothing left to chance: the sign reads: We demand the release of all political prisoners in Turkey!

Mixed feelings in the audience

The reception was mixed. When torture scenes were projected onto the screen, some visitors got up and left. There were standing ovations at the end though, and boos and bravos in about equal measure.

And Beethoven himself? His music is durable enough. The composer might have been pleased to know that his message is still understood over 200 years later — and equally disturbed that the situation for free-thinking people in some places is as grim as it was in his own time.

When Deutsche Welle first went on the air 65 years ago, the broadcaster opted for a melody from "Fidelio" for its signature tune. Ludwig van Beethoven's opera is about an act of liberation. (04.05.2018)