Despite his imprisonment, Turkish author and journalist Ahmet Altan continues to speak his mind. His tireless critiques of Turkey's Kurdish policy and the Armenian Genocide have earned him the Geschwister-Scholl Prize. 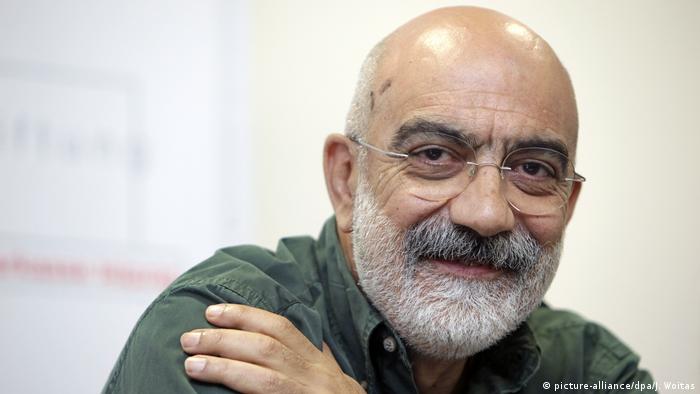 In September 2016, Ahmet Altan, founder of the now-banned Turkish newspaper Taraf, was arrested for the first time. The government in Ankara accused him of being a member of the Gülen movement, and thus of the coup attempt against President Recep Tayyip Erdogan.

On February 16, 2018, the dissent journalist and author was sentenced to life in prison on a vague charge, an alleged "dissemination of a subliminal message" on a TV program a day before the coup.

"You can imprison me but you cannot keep me here. Because, like all writers, I have magic, I can pass through your walls with ease," Altan wrote in I Will Never See the World Again, the 2018 book he penned in his cell in the maximum security Silivri Prison, and for which he is being awarded the prestigious Geschwister-Scholl literary prize on Monday.

The infamous Silivri detention center is the same jail where German-Turkish journalist Deniz Yücel claims he was tortured during his near year-long incarceration. Indeed, the verdict against Altan and five other journalists was announced on the day that Yücel was finally released from custody.

"[Ahmet Altan's] fate, unfortunately, exemplifies the situation of many independent journalists in increasingly authoritarian or also dictatorial societies," said the Geschwister-Scholl Prize jury that awarded the €10,000 ($9,000) literary prize to the imprisoned Turkish journalist.

His case also reflects the current showdown within the Turkish judiciary. On November 4, 2019, the sentence was reduced from life to 10 years and six months. At the same time, he and the journalist Nazli Ilicak were released on condition that they regularly report to the police.

However, a few days later, the Attorney General's office filed an objection and Altan is back in prison. 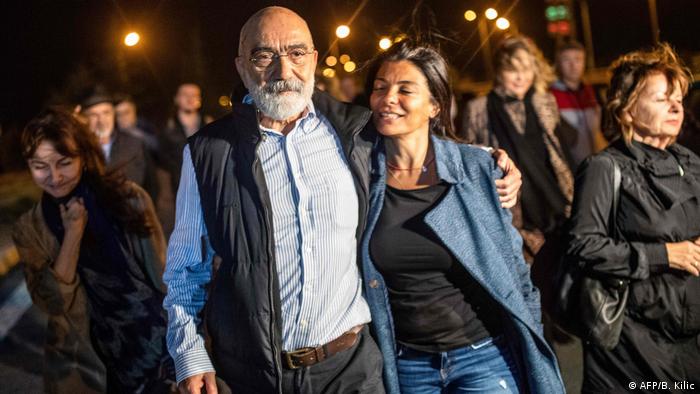 Ahmet Altan and his daughter are reunited following his release from Silivri on November 4. However, he was back in prison 8 days later

"This judicial farce, emblematic of a period where politically motivated show trials have become the norm, must be brought to an end," said Amnesty International's Europe Director, Marie Struthers. "He was prosecuted, jailed and convicted without a shred of evidence, purely because of his opinions. [His re-arrest] compounds an already shocking catalog of injustice he has been subjected to," she added.

The Turkish writer and Nobel laureate Orhan Pamuk, who was charged with "insulting Turkishness" in 2005, also found clear words: "It is unacceptable that the law is disregarded in this way and the judgments of the Supreme Court are so boldly trampled on," the Turkish writer commented in the Süddeutsche Zeitung. "As long as the systematic injustices against Altan continue and we remain silent, it will be shameful for us and our humanity," he added.

But Altan himself has refused to be silenced. For bravely stating his case from prison in I Will Never See the World Again, he was awarded the 40th Geschwister-Scholl literary award given since 1980 in honor of Sophie and Hans Scholl, the siblings who resisted Hitler and the Nazis through non-violent protest and were henceforth executed. Past winners include journalist Glenn Greenwald, Chinese writer Liao Yiwu, Russian journalist Anna Politkowskaya and GDR writer Christa Wolf.

In the collection of essays, Altan writes about his personal experience in pre-trial detention, his encounters with police officers, prosecutors and judges, and his fellow inmates in the overcrowded cells in the prison.

According to the jury of the prize, these revealing reports "testify to a great stability, to the decision, despite all deprivations, to be stronger than the interrogators, accusers and judges."

"Ahmet Altan asserts his inner freedom in a moving and courageous manner," the jury went on about texts written in "dialogue with world literature" that are also "a document of resisting and of intellectual independence."

"Ahmet Altan speaks for all those who stand for the truth and defend the freedom, even under the most difficult conditions. In this way, he himself defends the freedom and reminds of the legacy of the siblings Scholl," added the jury.

Echoing the writer's own words, the jury concluded "that with the magic power of the writer, he can also easily pass through the walls of prison."

In April, the jailed dissident author also published a letter from prison for DW on the occasion of Press Freedom Day.

"I recommend to everyone who, for whatever reason, feels trapped, oppressed, or distressed to look for a sentence that belongs to them alone. It may be that they won't find that sentence, but just searching for it is, in itself, comforting and cheering," he wrote. "Freedom can only be found in adventures in our own minds. No matter how thick the walls around you are."

Together with Iranian artist Shirin Neshat and the Mongolian publisher Enkhbat Roozon, the German-Turkish author has been honored by the Goethe-Institut. Akhanli talked with DW about his writing — and state persecution. (28.08.2019)

Deniz Yücel and Asli Erdogan are among hundreds of writers and journalists who have been jailed in Turkey since last year's attempted coup. Both were awarded the Prize for the Freedom and Future of the Media in Leipzig. (06.10.2017)

Garance Le Caisne of France has won the Scholl Prize for her book about bravery in the Syrian war, a true story. The award remembers the Scholl siblings, who were executed for their resistance work under the Nazi regime. (21.11.2016)

A court has ordered the release of Ahmet Altan and Nazli Ilicak after the journalists served more than three years in prison. Their case has been symptomatic of the post-coup crackdown on the media in Turkey. (05.11.2019)

They were few, but they existed: People who risked their lives to fight the Nazis. The German Resistance Memorial Center in Berlin pays tribute to them. (19.07.2019)