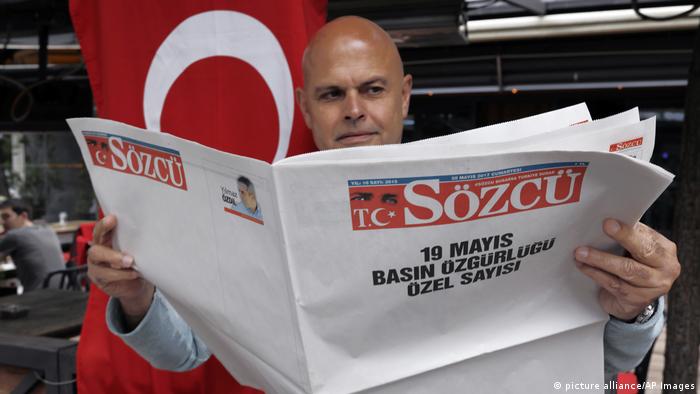 A Turkish court on Friday convicted six journalists and another employee of the opposition newspaper Sozcu of terrorism for aiding a network that Ankara says orchestrated a failed coup in 2016, the state-run Anadolu Agency reported.

They were accused of supporting the coup by publishing newspaper articles that were critical of President Recep Tayyip Erdogan. Sozcu has published a number of anti-government and provocative frontpage headlines that have even drawn the skepticism of fellow Erdogan-critics.

The prison terms range from two years and one month to three years and six months, said their lawyer Celal Ulgen. All seven have rejected the charges and are expected to appeal the verdicts. The convictions against the Sozcu journalists come shortly after journalists for the Cumhuriyet newspaper were targeted and arrested in August.

The arrests are part of an ongoing crackdown on suspected followers of Fethullah Gulen, a US-based Muslim cleric whose movement is blamed by the government for orchestrating the bloody 2016 coup that saw hundreds killed by Turkish police forces and led to thousands of arrests.

Turkey and Pakistan classify the movement as a terrorist organization, while the United States and the European Union reject the classification.

"This is an empty case," Emin Colasan, a columnist at Sozcu, was quoted by the paper as telling the court. "There is no evidence or witness against us."

The newspaper decried the verdict as a "black stain," saying that those convicted were only carrying out their work as journalists.

The court ruled to acquit the eighth defendant, video journalist Mediha Olgun, and deferred a ruling on the newspaper's owner, Burak Akbay, who is living abroad and is being tried in absentia.

The Committee to Protect Journalists ranks Turkey as the second-highest jailer of journalists in the world after China, with over 108 journalists or media industry employees currently incarcerated.