When Deutsche Welle first went on the air 65 years ago, the broadcaster opted for a melody from "Fidelio" for its signature tune. Ludwig van Beethoven's opera is about an act of liberation. 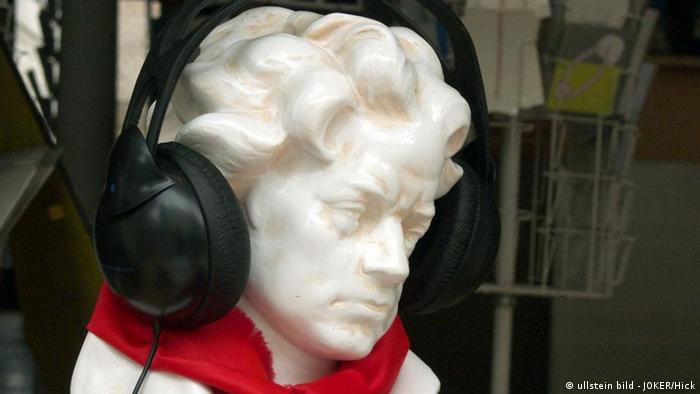 A political prisoner is starved and nearly tortured to death because the prison's military governor knows that the prisoner could incriminate him. The incarcerated man's wife masquerades as a young man and, thus camouflaged, makes her way into the dungeon.

When the governor attempts to stab the prisoner, the woman jumps between them and pulls out a pistol. At that very moment, trumpets sound out and the Minister, a higher authority, enters the scene. A friend of the prisoner, he recognizes what has been going on and sets the political prisoners free.

At this happy ending of the opera "Fidelio" by Ludwig van Beethoven, Minister Fernando sings the words "Es sucht der Bruder seine Brüder" (The brother seeks his brothers), and continues: "Und kann er helfen, hilft er gern" (And if he can help, he does so gladly).

The melody to the words is anything but catchy; consisting of 10 notes, seven of them at the same pitch, it is veritably ungainly in fact. Rather than high drama, it dispels a mood of stability and reliability. Nonetheless, it was chosen as the signature tune when Germany's international broadcaster began its shortwave radio transmissions on May 3, 1953.

Symbolism in the words

The choice had not only to do with the musical motif, but was also based on the symbolism in the words. Only eight years after the end of World War II, building new friendships and international relationships was no easy task for the new Federal Republic of Germany.

One sought to proceed in a "brotherly" manner with listeners and partners abroad through friendly exchange. Trust was to be built in a fair and impartial sharing of information.

DW signature tune in the historic version, played on the celesta

For many years, the melody, played on a celesta keyboard, penetrated the constant ebb and flow of interference noise on the shortwave radio spectrum. It thus made its way to the speakers of shortwave radio sets around the world – often in endless repetitions leading up to the news at the top of the hour.

The broadcaster then had its headquarters in Cologne, and the Beethovenfest classical music festival took place only sporadically in Bonn, 30 kilometers upstream the Rhine.

The move from Cologne to Bonn, and the media partnership with the re-established and much bigger music festival, had to wait until the new millennium. Then it seemed only fitting that Deutsche Welle should once again associate itself with Beethoven.

After the first broadcast, about four decades passed before DW was to truly exploit the melody and unlock its potential. By then, the broadcasting corporation had grown to up to 40 language departments. Each chose its own signature tune according to taste for its various formats, be they news, politics, science, sports or music.

Audio design sample from the 1990s

The Beethoven melody was then "exploited" in various arrangements and settings that were made mandatory for the different programs.

In the mid-1990s, the new jingle package was produced by percussionist Yogi Tautz and saxophonist Frank Loef, who updated the Beethoven motif.

Some said the results were no longer music, calling them "functional tones."

At the end of the 1990s, it was German jazz trumpeter Manfred Schoof's turn.

Dubbed "the great romantic among avant-garde jazz artists," he is also a noted composer. His version, understandably, sounds jazzier.

In 2002, 2008 and 2012, Ulrich Weichler, owner of the company Audiowerk in Berlin, was charged with revising the signature tune in ever new incarnations.

One collage gives an impression of DW's many broadcast languages.

The package of broadcast-ready tunes won the prize for Best Broadcaster, Program, Film or Content-Oriented Audio Design at the International Eyes & Ears Awards in Munich in 2010.

DW has long since evolved from a radio broadcaster to a multimedia provider.

Its signature tunes have also been produced for television and online programs and formats.

With each new production, the basic tune has evolved and by now contains only fragments of the original yet maintains its spirit.

One notable difference can be heard in the last three notes of the most recent 2012 version.

Originally a descending motif, suggesting reliability, security and coming to a resting place, they are now ascending, which gives a subliminal forward-looking, stimulating impression.

A new package will be produced for 2018, and when the composer has finished working on Beethoven's durable ditty, we'll know once again how it sounds when "the brother seeks his brothers."