Some are calling it animal cruelty, others are calling it an application of the Atkins diet. Whatever the opinion, Mikesch the cat is one tubby tabby after being fed 2 kilograms (4.4 lbs) of mince every day. 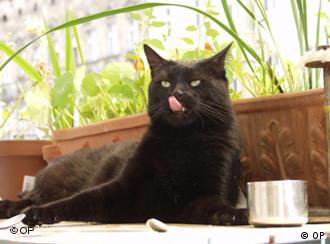 Berlin vets didn't mince their words about owners who feed their cats huge amounts of meat.

The black and white house cat, weighing in at 18.5 kg (nearly 41 lbs), around six times the normal weight of an average moggie, was taken away from his elderly owner on Thursday and brought by very strong members of staff to a Berlin animal shelter.

Apart from not wanting to be removed from the lap of luxury, the six-year-old feline seemed reluctant to make the move to his new address after his owner was himself relocated to a residential home. That could also be down to the fact that Mikesch is so fat that he cannot take more than four steps without getting exhausted.

"You can call it cruelty to animals," said shelter veterinarian Karin Bartell on Friday, as the cat stared straight ahead with a bored look. It's a problem for joints and the heart. The cat can't clean itself because he is too fat. He walks three or four steps and is completely exhausted because the heart no longer works properly and the cat can't breathe normally anymore."

Mikesch has been put on a strict diet to reduce his size. Cats usually weigh between three and six kilograms and should eat no more than about 300 grams (10 ounces) of food each day, vets say.

A spokesman for Guinness World Records said they did not keep track of fat cats any longer but said the existing record was 18.55 kg (41 lb), belonging to a cat from Minnesota named O.T.

DW-WORLD's look at the lighter side of life.