Police have made several arrests after an anti-immigration demonstration turned violent in the southern English port. Tensions have spiked over a large increase in migrants crossing the English Channel from France. 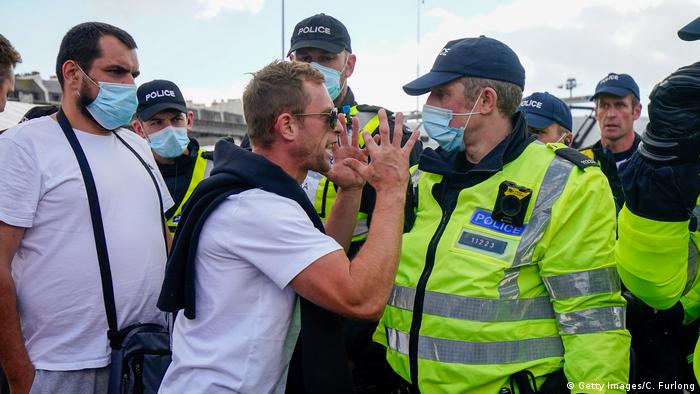 Dozens of right-wing, anti-immigration protesters gathered in the southern English coastal town of Dover on Saturday to rally against the numbers of migrants sailing to the United Kingdom from France.

"Police officers made 10 arrests as they worked to minimize the disruption caused by protests in #Dover," Kent police reported on Twitter.

Those detained were held on suspicion of violent disorder, assaulting an emergency worker and a racially aggravated public order offense, a police statement said.

'We stated that it was unacceptable for anyone to use the event as an excuse for criminal behavior and we were robust in taking action against those who did," said Chief Superintendent Nigel Brookes.

Earlier in the day the march, which included several people wearing Union Jack masks, managed to block the main road in the town. 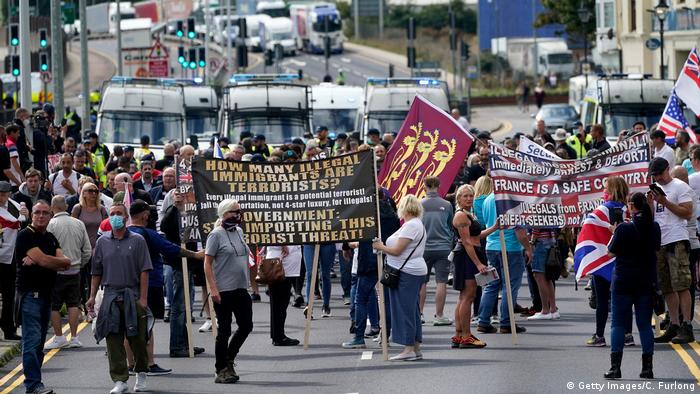 Some protesters were heard shouting "England till I die" and singing "Rule Britannia!"

The song has recently garnered criticism for romanticizing the country's colonial past, especially in the context of renewed questioning of the impacts of colonialism, in the wake of the global Black Lives Matter protests.

A counterdemonstration made up of around 100 anti-racist activists came out onto the streets to declare that asylum-seekers are welcome in the UK.

"We are standing up and welcoming people who are in desperate circumstances fleeing from awful situations," said Peter Keenan from the Kent Refugee Help Group.

Message on the white cliffs

The humanitarian charity Freedom from Torture projected a message onto the famous white cliffs of Dover on Friday night, with the words "Rise above fear. Refugees welcome."

The number of migrants using boats to cross the English channel has increased in 2020, reaching more than 5,000. The coronavirus pandemic has reduced the opportunities to stow away on trucks or ferries.

The Strait of Dover, 33.8 kilometers (21 miles) at its narrowest point, has seen a spike in the number of rubber dinghies being used to transport people, most of whom go on to seek asylum in the country.

Members of a far-right terror group are standing trial for targeting politicians and refugee shelters with explosives in 2015. The case has divided Freital, a town not far from the eastern German town of Dresden.