Scotland: Support for independence surges | Europe | News and current affairs from around the continent | DW | 05.09.2020 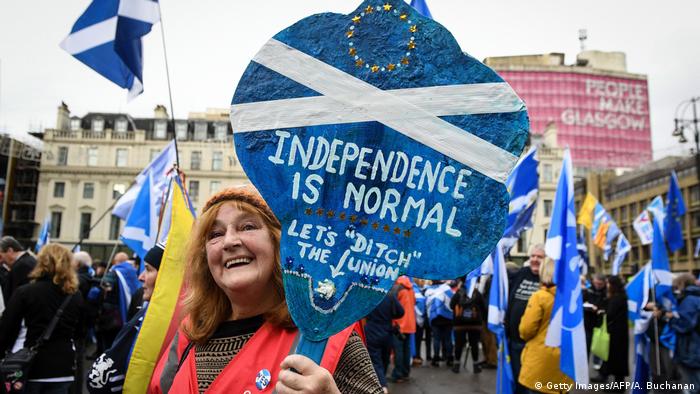 It's been 20 years — almost to the day — since Paula Kirby packed up her things and moved to Scotland. As an Englishwoman north of the border, the 2014 vote on independence didn't pose too great of a dilemma: the United Kingdom was reasonably stable, prosperous and progressive. Separation "just wasn't worth the upheaval," said the freelance translator.

That's ancient history now. In the six years since Scots rejected independence by a 10-point margin, Britain has lurched from the constitutional bedlam of Brexit to the public health calamity of COVID-19.

The former — wholly unexpected — was a real eyeopener for Kirby. "[Brexit] exposed the extent to which power in England neither understands Scotland nor is interested in it. We're just here as a sort of add-on, and we're supposed to just do as we're told," she said. London and Edinburgh's respective handling of the coronavirus crisis has only cemented her beliefs in the benefits of self-governance.

Now a full-blooded convert to the pro-independence camp, Kirby is adamant that Scotland's interests would be better served separate from England.

Swing in favor of independence In that, she's not alone. Since the start of 2020, opinion polls have given "Yes" campaigners a consistent lead over their unionist rivals, with one recent survey predicting a total reversal of the 2014 referendum result — 55% in favor of separation, versus 45% against.

Much of this swing is tied to Brexit. Scots voted against leaving Europe by almost two-to-one in 2016, and the ascendancy of Prime Minister Boris Johnson — who's prepared to take Britain out of the EU without a deal — has proved anathema to many north of the border.

With the emergence of coronavirus, these divisions have sharpened. Though neither Scotland nor England has weathered the storm particularly well (the UK collectively has suffered one of the world's highest COVID-19 death tolls), Nicola Sturgeon — Scotland's pro-independence first minister — has "played the politics" of the pandemic more adeptly than her London counterpart, says political analyst Sir John Curtice.

"The public think that Nicola Sturgeon has handled the coronavirus crisis brilliantly, and they think Boris Johnson has done badly. That is not unique to those who voted No in 2014, or those who voted Leave in 2016. In all groups, Sturgeon is well ahead of Johnson," said Curtice.

It's a reality that confounds unionists. From a scandal surrounding Scotland's care homes (which have seen more COVID-19-related deaths than the nation's hospitals), to the alleged cover-up of an early outbreak in February and an embarrassing U-turn on how high school grades are calculated in lieu of canceled exams, Sturgeon's navigation of the crisis hasn't always appeared surefooted.

And then there are the pandemic's economic ramifications. As the costs of contagion come into focus and recession bites, the nation's unemployment rate — already the UK's highest — is expected to rocket. Indeed, without the British government's deep pockets keeping thousands of faltering Scottish businesses afloat, those jobs might already have been lost.

For those of a pro-independence persuasion, this is a problem. In 2014, the Yes camp's efforts to assuage financial fears fell flat — and that was when times were good. Today, the economy is in free fall, oil and gas sales (cornerstones of Scotland's wealth) have slumped and the country's national budget deficit is three times that of the UK as a whole. 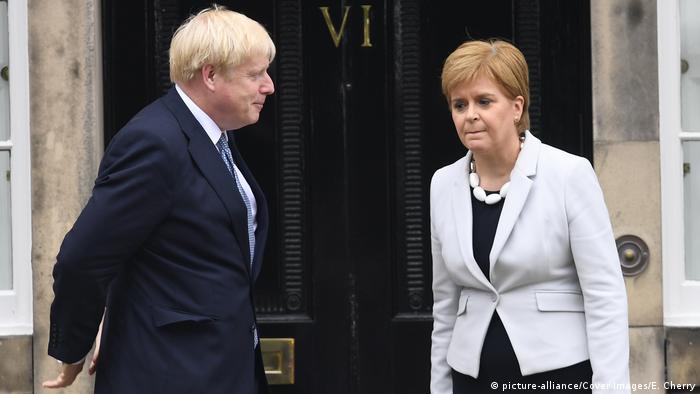 But still, the Scottish government appears to have held onto the confidence of its people. Sturgeon's commitment to a daily coronavirus press conference and grasp of the crisis's finer details have contributed to this, said Curtice, adding that, fundamentally, "she's been on the level with people, talking to them, not at them."

Johnson, meanwhile, has seen his approval ratings slide steadily since April. The fiasco around Dominic Cummings — the prime minister's chief aide — and his apparent flouting of lockdown rules factored heavily into this, polls reveal, as has Downing Street's muddled public health messaging.

But isn't the unity of Britain bigger than Boris? That's the opinion of Pamela Nash, chief executive of the Scotland in Union group, who worries especially for the fate of an independent Scotland post-Brexit.

Too high a cost?

"While many of us in Scotland will mourn our membership of the EU, it is clear that if the cost of rejoining was to leave the UK, then this is not a price worth paying," she said.

"It would result in a border with our neighbors in England. As 60% of our trade is with the rest of the UK, this would put jobs and livelihoods at risk and no one wants a border put up between our friends and families."

It's an argument Scots will be hearing time and again in the coming months. This week, Sturgeon said she would set out plans for a second independence referendum ahead of next year's Scottish Parliament election. Should she win that poll convincingly, the UK government — which must approve a second vote on secession— will have little choice but to oblige.