Coronavirus is death knell for Scottish fishing industry | Europe| News and current affairs from around the continent | DW | 01.04.2020 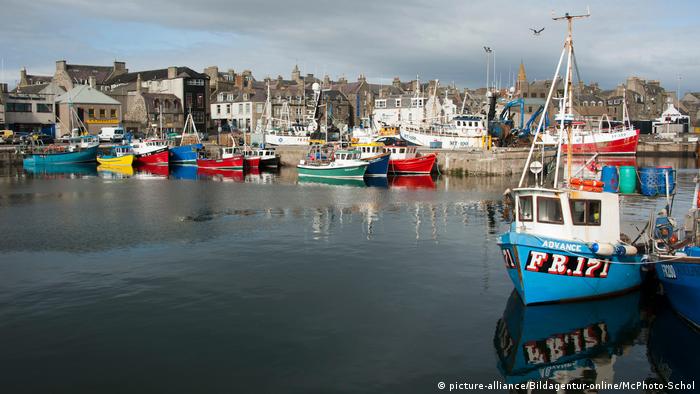 As the worst of the winter weather recedes and Easter approaches, Fraserburgh harbor in northeast Scotland ought to be teeming with activity. Under clear skies, dozens of trawler boats would — in normal times — be setting off for the bountiful fishing grounds of the North Sea, or returning to unload their catch. But these are not normal times, and the port sits silent.

A full four-fifths of the fleet is currently tied up, estimates veteran Fraserburgh skipper Mark Robertson. Like businesses the world over, British fishing has collapsed in the wake of the coronavirus pandemic.

"Sales have totally died a death. We're not exporting anything. There is no market," Robertson laments.

In keeping with the wider UK fishing industry, the vast majority of his catch, upwards of 80%, is sold in Europe. As the continent awoke to the COVID-19 crisis and went into lockdown, demand for his product crashed.

While the hotels and restaurants of France, Italy, and Spain — the biggest buyers of British fish — remain closed, UK fishermen have few good options: shut up shop themselves, or freeze what they catch. 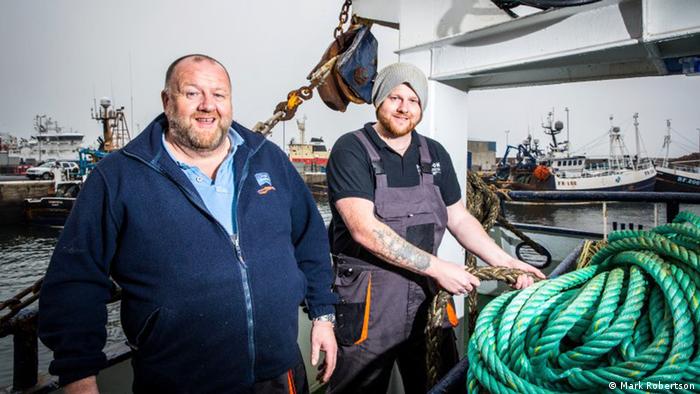 "Everything I've got is invested in the fishing industry," says Mark Robertson, pictured here on the left with his son Adam

From hope to hell

The latter, though helpful during short drops in demand, will only "compound" the problem, says Robertson. Cold stores can keep the product viable, but when the crisis passes and the market is flooded with frozen fish, prices will plummet.

This brutal reality comes at a time of surging optimism among British fishermen. Vociferously pro-Brexit, they hope that departure from Brussels' loathed quota system — the Common Fisheries Policy — will breathe fresh life into the industry. But now, with the door to Europe closed by the coronavirus, many fear the worst.

"The industry can 'down-man' and downscale for a while, but if it's for a lengthy period of time it'll bring on the start of terminal decline," says Mike Park, CEO of the Scottish White Fish Producers Association (SWFPA).

"We've always to a degree believed that we're resilient… [but] we are critically dependent on particular areas of the market that we'll have to find ways to overcome."

Habits will have to change

Doing so will not be easy. For an island-nation, Britain is curiously conservative when it comes to seafood, rarely straying from the staples of cod, haddock, tuna, salmon, and prawns. These tend to be imported frozen from low-cost outside suppliers, despite their abundance in UK waters. Europe, on the other hand, has a voracious appetite for the best that Britain has to offer: fresh lobster, crab, cuttlefish, and more.

Reliance on foreign tastes isn't unique to the UK industry. America, for instance, has one of the world's largest fisheries sectors — supplying salmon, pollock and lobster to Europe and Asia — but buys in most of the fish it eats.

"Seafood is one of the most globally traded commodities in existence," says fisheries expert Dr Bryce Beukers-Stewart.

"The current issues with coronavirus have really highlighted how dependent the UK fishing industry is on trading with the EU and, to a lesser extent certain other countries, like China." 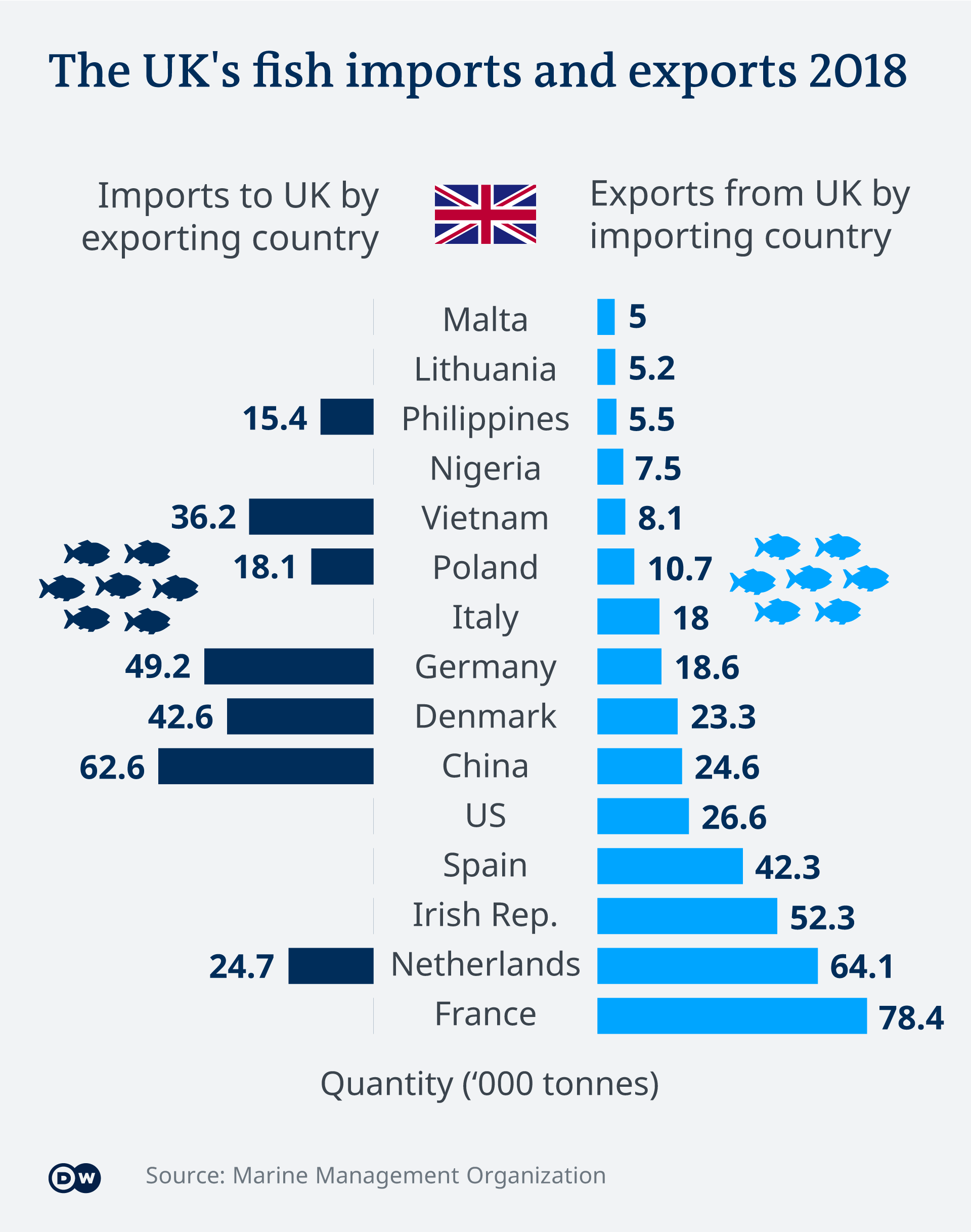 Might this change, in light of the crisis? Too early to tell, says Beukers-Stewart — but a surge in self-sufficiency and consumption of locally sourced produce would be a "silver lining."

SWFPA chief Mike Park agrees. It's incumbent on the industry to find "clearer paths" to get British fish onto British dinner tables, he says.

"[That might mean] entering into the education of the UK palette with regard to seafood. How you cook it, the freshness, the body benefits of it, Omega 3 and these sort of elements."

It's an ambition shared by the UK government, which recently launched the #SeaForYourself campaign: an initiative to acquaint consumers with locally caught fish. This, however, is a long-term objective — intrinsic changes to the national diet can't happen overnight.

In the meantime, British fishermen are "withering on the vine," says Park. With staff to pay (particularly the industry's foreign crew, who tend to be contracted rather than self employed), harbor dues to cover, insurance bills to budget for, and the rental of vital equipment, skippers have a lot going out and nothing coming in.

Read more: Scottish fishermen could be 'sold down the river'

And they're not the only ones at risk — fishing supports whole coastal communities in the UK. From the shipyard staff and seafood processors to the delivery drivers, electronics suppliers, and even the owners of cafes and pubs, entire towns rely on the lifeblood of fish.

Acknowledging this, the Scottish government has pledged a £5 million (€5.6 million; $6.1 million) support package to help fisheries businesses blindsided by the virus (similar measures are expected in England and Wales shortly). But the bailout will provide just 50% of average earnings — and crucially, will cover owners of vessels less than 12 meters long only.

That rules out Mark Robertson back in Fraserburgh, who, despite trying to remain upbeat, knows what is at stake.

"Everything I've got is invested in the fishing industry, and I just see it going before my eyes."