A website and its social media accounts aimed at members of European Parliament is nearly a copy of Russia's RT, an EU report has found. Just 0.14% of content was actually from European lawmakers. 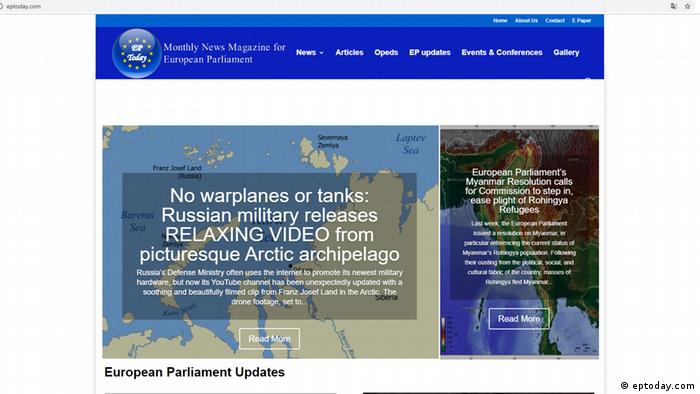 A news website claiming to be the "monthly news magazine for the European Parliament" takes much of its content taken from the RT news outlet, according to a report from an EU task force.

EP Today — short for European Parliament Today — says it is "designed only for the MEPs to write articles about issues which they think are currently important and need attention of all their colleagues and other policymakers."

Not just the name, also the logo — a ring of 12-stars on a blue background — creates the impression that the website is directly run by the European Parliament, said EUvsDisinfo, a project of the European External Action Service's East StratCom Task Force.

According to EUvsDisinfo, EP Today "uses the name of the European Parliament in a misleading way and without any legal authorization."

The EUvsDisinfo project was established in 2015 to "better forecast, address, and respond to the Russian Federation's ongoing disinformation campaigns affecting the European Union, its Member States, and countries in the shared neighborhood."

EP Today, which operates out of Brussels with its core staff, has around 145,000 Facebook fans and 6,000 Twitter followers. It generates some 25 articles every day.

The website does not produce its own original content; more than 99% of its articles are taken from other news organizations.

"Since October 24, 2018, 47% of the [EP Today] articles are word-for-word copies of articles from RT.com [Russia Today.com]. Often, the entire homepage is filled with exact copies of RT articles. The same article can even appear multiple times on the same page," EUvsDisinfo said.

"The European Parliament contacted EP Today in September of this year regarding the unauthorized use of the institution's name and suggested ways to rectify the situation and stop misleading the public," according to EUvsDisinfo.

Prior to October 24, 2018, EP Today "exclusively syndicated Voice of America."

The reason why the website switched to RT, formerly called Russia Today, could be that RT.com, according to some internet rankings, has a higher international readership, "although there are many other news outlets ranking much higher and are more relevant to the EU audience that EP Today targets," the EU task force report said.

EUvsDisinfo said that both Voice of America and RT allow the reproduction of their content, whereas most other broadcasters and news portals require case-by-case permission.

At its meeting today in Berlin, the DW Broadcasting Council discussed the accusations of a State Duma commission cited in agency reports. (27.09.2019)