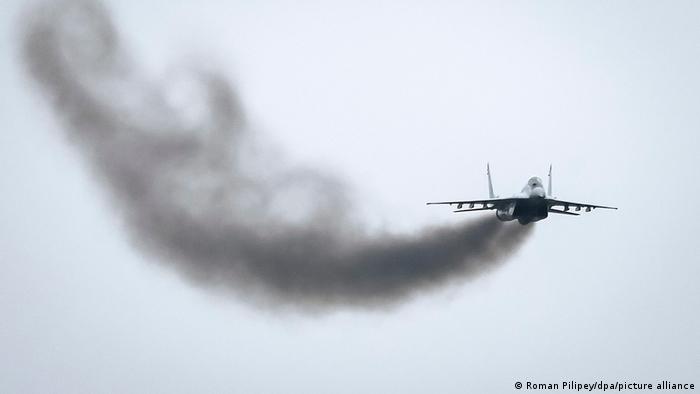 The pilot is said to fly a MiG-29, the plane pictured here in a 2016 training session

It was a story that gave courage and hope to the people of Ukraine during wartime: The military was putting up a fierce fight against the Russian invasion, and one very exceptional fighter pilot became a folk hero. He was alleged to have single-handedly brought down roughly 40 Russian planes since the invasion began. Videos of the ace pilot began circulating online at the beginning of the war and he quickly made headlines as the "Ghost of Kyiv".

The story — just like the recent news of the war hero's death — spread primarily via social media. But news outlets such as the Times in the UK and the New York Post also speculated that the "Ghost of Kyiv" was 29-year-old Stepan Tarabalka.

The pilot's death had been announced by the Ukrainian Defense Ministry on Twitter in late March. The post read, "On March 13, 2022, during an air battle with the overwhelming forces of the invaders, Major Stepan Tarabalka 'went to heaven'. Major Stepan Tarabalka was awarded the title 'Hero of Ukraine' (posthumously) for the protection of airspace, valor and courage."

But was Tarabalka really the legendary "Ghost of Kyiv"? Moreover, did such an exceptional pilot ever actually exist?

Military experts believe it is unlikely that a single fighter pilot shot down roughly 40 enemy aircraft. Justin Bronk of the British Royal United Services Institute (RUSI) told DW, "The totals mentioned about a pilot shooting down 40 Russian aircraft are highly exaggerated, since Russia has only suffered 25 confirmed fixed wing aircraft losses, and most were shot down by surface to air missile (SAM) systems or man-portable air defense systems (MANPADS)."

After Ukrainian government accounts had repeatedly spread the story of the "Ghost of Kyiv" themselves, the Ukrainian Air Force clarified on Facebook that "The hero of Ukraine Stepan Tarabalka is NOT the 'Ghost of Kyiv' and he did NOT hit 40 planes." Rather, he "embodies the collective spirit of the highly skilled pilots of the Tactical Air Force Brigade who successfully defend Kyiv and the region." Ukrainians should "NOT neglect the basic rules of information hygiene" and verify information sources before disseminating them further.

But a tweet at the beginning of the war which has since been deleted, for example, said: "Dozens of experienced military pilots, from captains to generals, who were previously discharged from the reserve, are resuming their service in the Air Force. Who knows, maybe one of them will be the aviator on the MiG-29 so often seen by Kyiv residents!"

Private users and former President Petro Poroshenko had shared videos and photos purporting to show the mysterious pilot — many of which turned out to be fake.

Poroshenko, the president from 2014 to 2019, posted a photo of a helmeted pilot in a cockpit on Twitter, identifying the individual as the Ghost of Kyiv. "With such strong defenders," Poroshenko wrote, "Ukraine will definitely win!"

As a reverse image search shows, that photo was posted almost three years ago by the Defense Ministry. The pilot in the picture is doing a test flight with a new helmet. So, even if that is in fact the mysterious pilot, the photo is an old one.

The name Vladimir Abdonov is making the rounds, and there are also various pictures that purport to show him. 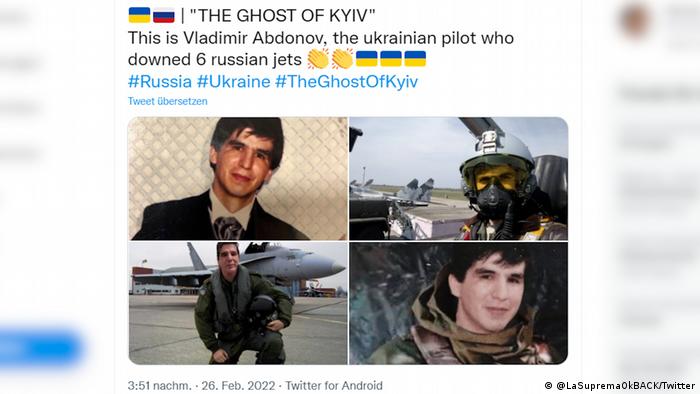 If Vladimir Abdonov does exist, he is not the man pictured here

The many faces of the 'Ghost of Kyiv'

Some of the photos are clearly not genuine. The fact that the following image has been altered can for instance be shown by a so-called noise analysis with an image-processing program. When images are being altered, this often leaves visible traces in the noise. In this specific case, this can be seen at the pilot's head, the insignia on his arm and the Ukrainian flag in the background. 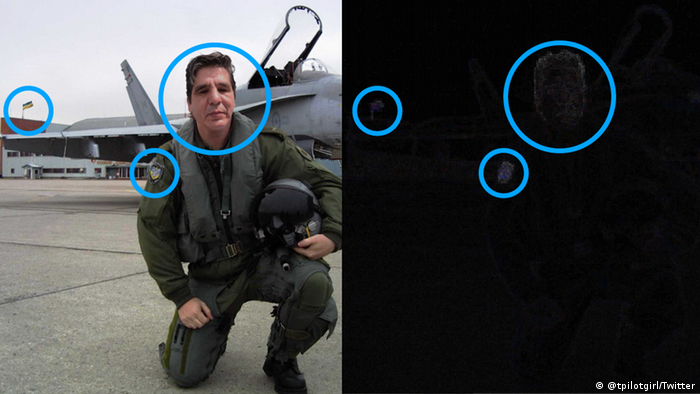 Not the 'Ghost of Kyiv' but a manipulated photo from Canada

A reverse image search confirms the suspicion that it's a fake. The same photo appeared online years ago, but with a different head, a different badge on the arm and no flag in the background. If you look closely at the plane behind the pilot, you can see a gray maple leaf — a symbol used by the Royal Canadian Air Force. This was presumably missed when the picture was manipulated, and it gives away that most likely it's a picture from Canada.

In fact, the man rumored to be "Vladmir Abdonov" whose face has been cropped into other images is an Argentine lawyer from Buenos Aires, who was amused about his new hero status and posted about it on Twitter.

How capable is Ukraine's air defense?

According to the information available, the 'Ghost of Kyiv' is more of a legend than a real person. All the reports regarding his identity have emerged as either false or at least misleading. Presumably, his story is more a metaphor for the collective courage and continued resistance of Ukrainian fighter pilots since the beginning of the Russian invasion. The Ukrainian government itself has now made this clear on social media.

Previous ambiguous statements probably served to boost the morale of the capital's residents, especially when it was under even heavier fire.

Fakes of the war in Ukraine fact-checked by Joscha Weber

Fact check: Do Vladimir Putin's justifications for going to war against Ukraine add up?

Shortly before launching a full-scale war on Ukraine, Vladimir Putin outlined his reasons for the attack. Russia, he said, must "defend itself" and "denazify" Ukraine. Much of this is false.

Volodymyr Zelenskyy was seen by many as a comic actor who stumbled into the presidency. During the Russian war on Ukraine, however, the 44-year-old has matured into a respected statesman.

Fact check: 5 fakes of the war in Ukraine