Over 400 people died in one day in Germany as a result of COVID-19, marking a new grim record. But what does the death toll mean in the bigger picture of the country's pandemic? DW Fact Check reports. 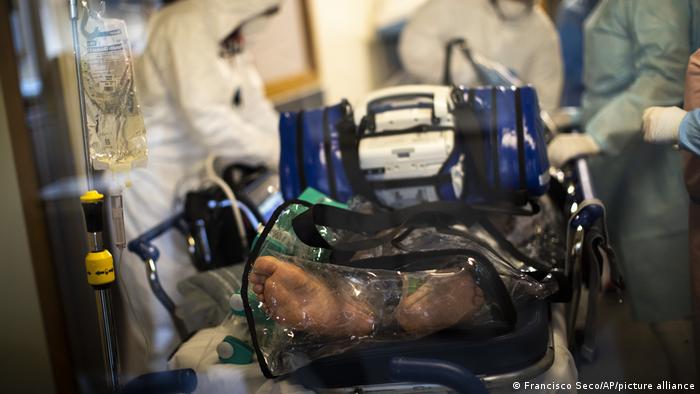 How can the current increase in the death toll be explained?

The number of new coronavirus infections in Germany began rising sharply in early October. Since mid-November, after the country implemented partial lockdown restrictions,  the numbers have plateaued or slightly decreased — with daily upward and downward swings. However, the overall infection level remains high.

Significantly more people in Germany have recently become infected with COVID-19, and the total number since the outbreak of the pandemic at the beginning of the year is approaching the million mark.

For weeks, experts have warned that cases of severe illness and deaths will follow the increase in new infections with a time lag. For example, the head of the German Hospital Federation, Gerald Gass, predicted to Bild newspaper on November 2: "In two to three weeks we will exceed the maximum number of intensive care patients from April."

He was right: As of November 25, 3,781 COVID-19 patients are undergoing intensive care treatment in Germany; the April peak was 2,850 patients. The report of the Robert Koch Institute (RKI), Germany's public health institute, and the German Interdisciplinary Association for Intensive Care and Emergency Medicine (DIVI) shows a clear trend: The availability of intensive care beds continues to shrink.

For Ralf Krumkamp, from the German Center for Infection Research, the relation between the number of infections and deaths in Germany is clear. "The rising death figures are delayed in relation to the case numbers. Currently, the number of infections is rising among the over-80s. So it is quite possible that we will observe a further increase in death rates," Krumkamp told DW.

Studies have shown there is a higher mortality risk among the elderly. A recent study led by Yale University researchers found that the mortality rate among those aged 65 or older was 62 times higher than those under the age of 55.

Is the second coronavirus wave in Germany worse than the first?

This depends on which figures are used. Measured in terms of new infections, the second wave is much more serious than the first. During the first wave, the figures climbed to 6,000 cases per day, while the second wave reached an estimated 23,000 cases on some days.

However, the testing rate needs to be considered when weighing the figures. In the spring, around 300,000 to 400,000 COVID-19 tests were carried out per week in Germany, whereas recently, between 1.2 and 1.7 million tests have been administered per week. The number of unreported cases is likely to have been significantly higher in spring.

When looking at the death toll, the picture is somewhat different. Daily deaths are now only reaching the peak of the first wave. Although 410 COVID-19 patients died in Germany on November 25, a new daily record,  the 14-day mean value shows a course similar to that of the first wave.

Is the mortality rate during the second wave higher than during the first?

With the figures currently available, the answer is no. The proportion of people infected with COVID-19 who have died is currently lower than in the spring. For example, in mid-April, the RKI still registered a fatality rate of 6.98%. At the end of October 2020, the figure was 0.94%, which is significantly lower.

However, this assessment could change.According to the RKI, the mortality data available for November is not set in stone, as the total COVID-19 figures from recent weeks remain unclear.

With regard to the fatality rate, however, one should bear in mind that it is related to the total number of recorded infections, which has increased with expanded testing. But even against this backdrop, the mortality rate is lower than compared to the spring. This could be attributed to the better protection of groups vulnerable to the coronavirus.

Are more people dying than usual?

Yes. As in many other countries, more people will die in Germany in 2020 than in previous years. However, the data show completely different trends in individual European countries.

In Germany, there have been significantly fewer deaths during the pandemic thus far than in several other populous European countries. But here, too, the spread of the coronavirus has led to a clearly discernible excess mortality rate, or the number of all deaths exceeding the annual historical average at a given time.

According to Germany's Federal Statistical Office, more people died between the end of March and the beginning of May than in the same period in previous years. In early April, the deviation was 14% above the four-year average. Because the death toll is rising once again due to the coronavirus, mortality is currently slightly above the average of previous years.

It cannot be deduced from these figures that there was an unreported number of undetected COVID-19 cases between March and May beyond the recorded coronavirus deaths. The figures available so far from the second wave are not yet conclusive.

However, the trend becomes even clearer when looking at Europe. According to data from the European mortality monitoring (EuroMOMO) project, the recorded mortality for the continent in spring 2020 was far above its usual threshold and is again so at present.

A glance at the statistics from 26 European countries reveals stark differences. Nations such as Spain, France and Belgium have experienced increased excess mortality, while others, including Finland and Greece, have maintained normal mortality levels.

Data from the European Centre for Disease Prevention and Control (ECDC) also illustrate the varying coronavirus death rates. The answer to the question of whether more people are currently dying than usual therefore varies greatly from place to place.