Tommy Robinson has been banned from the social media giant's platforms for violating "community standards" by promoting "organized hate." Robinson said removing his pages was tantamount to "removing the truth." 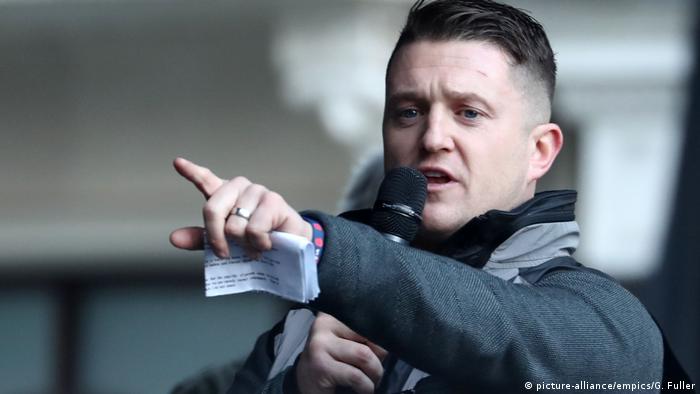 Robinson is said to have violated Facebook's "community standards" by promoting "organized hate" and other prohibited behavior.

Specifically, the company noted in a statement that Robinson's pages had repeatedly broken its standards by "posting material that uses dehumanizing language and calls for violence targeted at Muslims."

"This is not a decision we take lightly, but individuals and organizations that attack others on the basis of who they are have no place on Facebook or Instagram," the social media giant said.

Anti-fascist and anti-racist organization Hope Not Hate welcomed the decision, referring to Robinson as "a far-right thug who uses his platform to bully, abuse and stir up division."

Robinson, former leader of the English Defence League and co-founder of PEGIDA UK, has condemned the decision. "Where is free speech? I've breached no laws of Facebook... What I've done is shown people the truth, and that is what they are removing, the truth," he told Britain's Press Association.

The 36-year-old is a highly divisive figure in the UK and has been previously convicted on drugs, assault and fraud charges, among others. He was sentenced to 13 months in jail last year for livestreaming outside a court in breach of reporting restrictions on a trial of a gang accused of sexual assault.

Facebook has been embroiled in scandals over its sharing of users' data without their consent and has been criticized for its platform's role in Russian "fake news" influence campaigns during the 2016 US presidential election.

A scathing parliamentary report released last week in the UK branded Facebook as "digital gangsters" who failed to fight the spread of fake news and violated data privacy.

Angela Merkel has announced she is closing down her Facebook page as she is no longer the CDU party leader. She thanked her followers, bid farewell, and said those interested could still follow her work. (01.02.2019)