In 2013, record flooding hit the South German village of Fischerdorf. Authorities are erecting new defenses to protect residents in the future. Our reporter spoke to locals still rebuilding their lives five years on.

Hans Dallmeier glances in frustration at the construction site that was once his home and car dealership. He sighs and shrugs his shoulders. So much and so little has happened since his life's work was flooded in 2013.

"We lost everything that we owned. We didn't even have a pen," Dallmeier told DW. "And five years later we are still busy rebuilding. I can't believe it. I'm 65-years-old, I wanted to be retired by now."

While uninsured homeowners had 80 percent of rebuilding and renovation costs quickly covered by the German government, those with insurance, like Dallmeier, often faced red tape and long waits. Only now has he been able to demolish his business and family home. And it will take time to rebuild.

Dallmeier lives in Fischerdorf, a small village in the district of Deggendorf that's nestled in a valley where the Danube and Isar rivers meet. It also happens to be in a flood plain. Every few years, the rivers spill over and into the streets of the village.

Usually, the floodwater is knee-high, and any damage is manageable. But in 2013, heavy rainfall across Germany overwhelmed a weak dam and water pumps. That's when disaster struck.

A historic flood submerged the village.

Afterwards, more than 200 houses were demolished. So many buildings had to be torn down because floodwater mixed with spilled heating oil, contaminating them. A further 600 were refurbished.

In the meantime, federal and Bavarian authorities have invested €3.4 billion ($4.2 billion) in new dikes to protect the village and other districts along the Danube from future floods. The ones in Fischerdorf are almost finished. 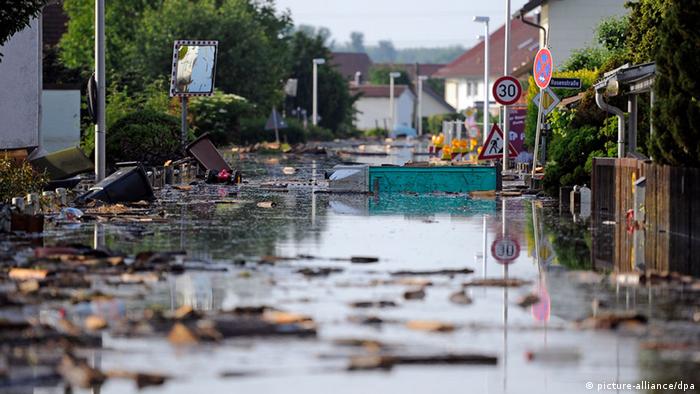 In 2013, the rivers Danube and Isar broke their banks, devastating the Bavarian village of Fischerdorf

Michael Kühberger, head of Deggendorf's water authority, walks along the old dike that broke in 2013. A memorial marks the spot today.

"Immediately after the flood, the dike along this stretch was rebuilt, but because it is too low to withstand a 100-year flood, plans were also put in place for a new dike about a kilometer away," says Kühberger, as he points to a riparian woodland.

Snowmelt in the Alps and volatile weather patterns have caused rivers across Germany to burst their banks. Europe's most important shipping routes have been closed off to traffic, with some areas facing evacuation. (06.01.2018)

The new constructions are a meter (3.3 feet) higher than the old ones — and are much more robust. The woodland lies between the two dikes and serves as a flood plain that can be purposely inundated to avoid a spill over into the village.

The authorities believe that the new construction together with water pumps will provide sufficient protection against future floods.

They say they've also accounted for the effects of global warming in their calculations, as climate change increases the intensity of extreme weather and likelihood of flooding.

Yet, Kühberger points out, it's impossible to say for certain that a major flood won't happen again.

"This is why we are worried that people will start building new houses in flooding areas. This would greatly increase the damage in case of a major flood and we are calling on local authorities not to issue new building permits for these areas," says Kühberger.

Despite the threat, most people in Fischerdorf have already rebuilt their houses.

Dieter Treske is one of them. He stands in front of his new home and points at a little plate a meter above the main door. It reads: "Floods, June 2013." 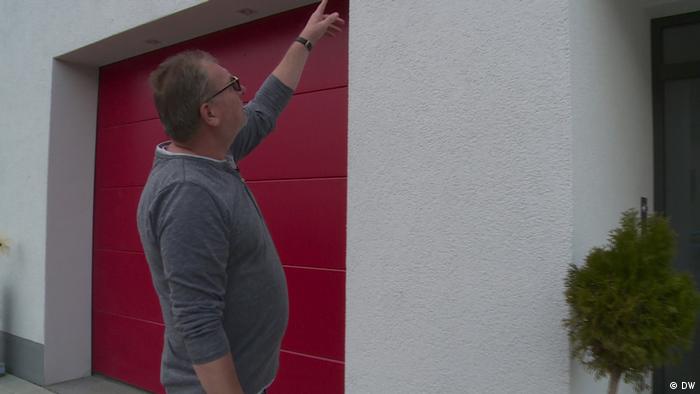 Dieter Treske rebuilt his home after the 2013 floods. A memorial plate sits on the wall above the main door

"The water stood three meters high. We had to cross the streets with boats and enter our house through the balcony," he told DW.

Treske was commander of the local volunteer fire brigade back then. He and his team worked around the clock to reinforce the old dike with sandbags. When they realized the dike wasn't going to hold, Treske called his wife and told her to take their daughter and two cats and get out of the house.

Treske has learned from the experience. His new home is built to specifications designed to withstand floodwater.

"On the ground floor, we only really have the garage, utility room and store room. The living rooms are on the first floor because of a new rule set by the City of Deggendorf," says Treske.

Although, there are no guarantees disaster won't strike again, Treske and others living in Fischerdorf have faith in the new measures — and their village. They want to stay.

"This is my home. I'm not going anywhere," says Treske, adding that the floods brought the community together. "We helped and relied on each other. I have never seen such a friendship and comradery among people like then."