Extortion in Acapulco: Victims often abducted and driven to ATMs

A Mexican newspaper has revealed how local businesses face regular shakedowns by criminal gangs who demand weekly protection payments. Once a tourist paradise, Acapulco is now Mexico's most dangerous city. 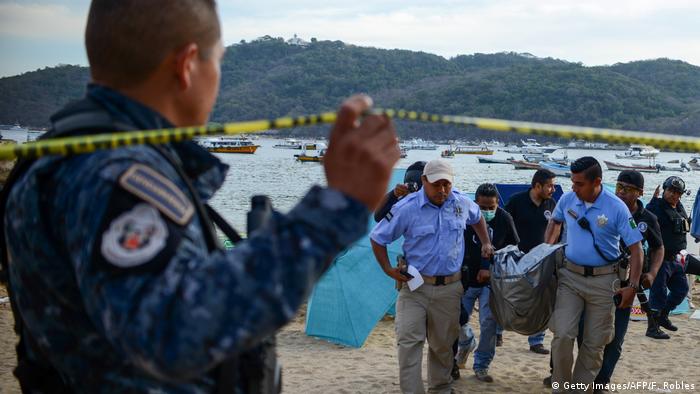 Businesses owners who service Acapulco's troubled tourist trade are being forced at gunpoint to withdraw cash from ATMs to pay extortion fees to local mafia gangs, a Mexican newspaper reported on Saturday.

Milenio detailed how taxi drivers, beach sellers, masseurs and banana boat operators are sometimes abducted and taken to nearby banks to settle outstanding "debts" to the criminals.

If they refuse to pay, they face violence and even death as the once-booming tourist city struggles with its new reputation as the country's most murderous metropolis, fueled by drug-related crime.

The newspaper described how the ATM shakedown was one of two main modus operandi used by the gangs. The other involves being given written messages to make payments through a local convenience store chain.

Victims are then ordered to take photos of their receipts on their smartphone and send the payment proof by WhatsApp messaging app.

Milenio said the paper slip method was favored by two main cartels, the Independent Cartel of Acapulco and the Beltran Leyva.

It gave the example of a 20-something man, who approaches his victims on the streets with written details of the weekly protection money. The note includes the account number they should pay into.

Victims are only too aware of what will happen if they don't obey his instructions.

'There are many dead people here," Carmen, who's given massages on the beaches of La Costera for the past 18 years, told Milenio. The masseuse said she gives 40 percent of her profits to the extortion gangs.

Last year, 28,000 people were murdered in Mexico, according to official figures — the equivalent of 82 people being killed every day.

In 2017, Acapulco had the dubious honor of being Mexico's most murderous city for a fifth year running.

The Pacific coast city is considered so dangerous that last year the US State Department issued its top travel warning for the former tourist mecca — a caution normally reserved for war zones like Syria and Iraq.

The city still sees large tourism numbers, but its glamorous reputation as resort favored by Hollywood stars is long gone.

Milenio cited officials figures from the National Public Security System showing reported cases of extortion remains low, peaking in 2016 at 92 cases. By August this year, 61 complaints had been made.

Many residents say extortion is not worth reporting, and that police and the military have been told to prioritize tourists' safety, leaving locals to fend for themselves.

"There's no choice but to give them [the gangs] the money, because if we don't, we'll have problems. We have families to look after and its our only source of work," complained beach seller Gloria.

One of Mexico's many missing

Out of 2,000 businesses belonging to the local branch of the National Chamber of Commerce (Canaco), some 300 members have shut up shop this year, due to extortion.

The local taxi industry has also been crushed by extortion gangs, with 80 stands across the city disappearing in recent years.

"[Criminals] get in as passengers, kill [drivers] and leave a message on a sign [to warn others]," Rogelio Hernandez, president of a local transportation association, told Milenio.

Some 2,000 taxi drivers have been killed since 2009, according to Hernandez' organization.

Last month, Acapulco's entire municipal police force was suspended after it was revealed that hundreds of police weapons had gone missing.

Officials warned that the force had been infiltrated by organized crime gangs, including the country's notorious drug cartels.

With the clock ticking, the US and Canada have reached a new trilateral trade deal with Mexico. Called USMCA, the pact will create a revamped NAFTA with key sections focusing on auto imports and Canada's dairy market. (01.10.2018)

Diego Maradona has taken up his duties as coach of a Mexican second-division outfit. The World Cup winner as a player has had little success in coaching, and some see his appointment as a publicity stunt. (10.09.2018)

Police failed to confront emerging gangs after cartel leaders were captured, the president has said. But critics have accused him of doing little to strengthen law enforcement agencies and the army. (04.09.2018)