Mexican marines were tipped off about the underground drug lab in the mountains near the northwest coast. The operation came after Mexican and US law enforcement announced new strategies to combat drug cartels. 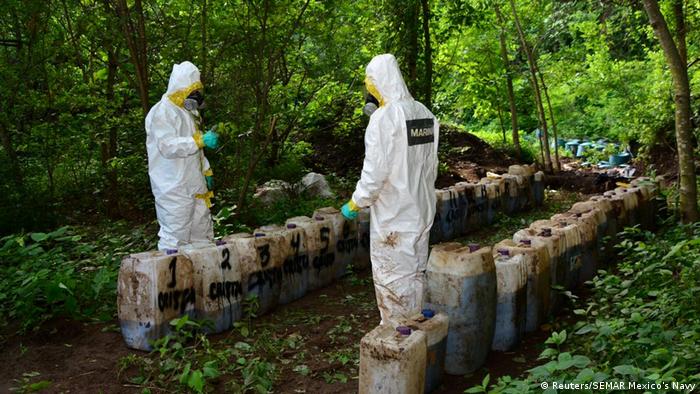 Mexican Navy forensic scientists at the site of the meth haul

The 50 tons of methamphetamine were destroyed on the site of the underground production facility found by marines, the Mexican navy ministry said in a statement on Friday.

Intelligence reports had indicated that tons of drugs were being produced in the town of Alcoyonqui in the remote area of the mountains about 19 kilometers (12 miles) outside the state capital of Sinaloa state.

The state was the operating ground for Joaquin "El Chapo" Guzman who led a powerful criminal cartel until his latest arrest in 2016. He is facing trial in the US later this year.

Since his demise, other drug cartels in Sinaloa and elsewhere in Mexico have continued the production and export of illicit drugs, mainly to the US, according to the University of San Diego's Justice in Mexico research initiative. 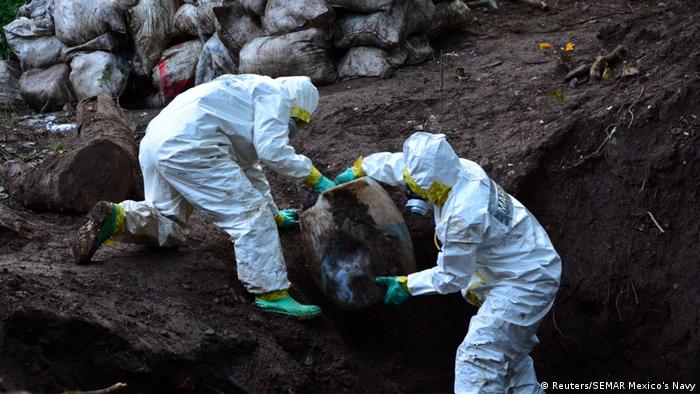 President-elect Andres Manuel Lopez Obrador, widely known as AMLO, takes up office on December 1. During his election campaign he promised to tackle the drug cartels and crime in Mexico.

It was former President Felipe Calderon who first sent soldiers to combat the drug cartels, after years of failure by ill-trained local police. Since his declaration of war against the cartels in 2006, more than 130,000 military personnel have been deployed each year, however, the violence has escalated. There have been 127,000 crime-related murders and thousands of disappearances since 2006. Mexico recorded more murders in 2017 than in any other year in its modern history.

Precise details of his plan remain vague but he and his team are listening to citizens' concerns and ideas for future security.

Ideas voiced so far include taking the military off the streets and replacing them with better-trained police, rewriting drug laws for marijuana and perhaps poppy production and stepping up social programs, education and job opportunities in violent, poor regions.

"We believe that within three years, we will have made enough progress to be able to take the military off the streets," Alfonso Durazo, the likely future head the Department of Public Security said recently. He added the most important aspect of the strategy was that it would "be more important to go after drug trafficking money than the drug traffickers themselves." Without their money, the cartels could not operate, he said.

But a new US-Mexican joint operation to combat the cartels announced this week is aimed at the ringleaders.

Agents from Mexico's Attorney General's office, Federal Police, the US Drug Enforcement Administration (DEA), the FBI and other Mexican and US security forces said they would target cartel bosses and their money from the new team's offices in Chicago where Mexican cartels are held partially responsible for drug-fueled street violence.

One of the bosses on the new team's list is Nemesio "El Mencho" Oseguera Cervantes, who heads the increasingly powerful Jalisco New Generation Cartel (CJNG). Rewards for information about his whereabouts have been increased in Mexico and the US.

"The sole purpose of these entities is one thing and one thing only — money," said Anthony Williams of the DEA at the announcement of the new team in Chicago on Wednesday.

The US agencies are also planning to do more to stop the illegal supply of weapons into Mexico, which authorities have blamed for fueling much of the gang violence.

Hundreds of migrant children still not with parents