Can Dundar has been reunited with his family in Berlin after his wife managed to flee Turkey. The well-known journalist has been in living in exile in Germany since 2016. 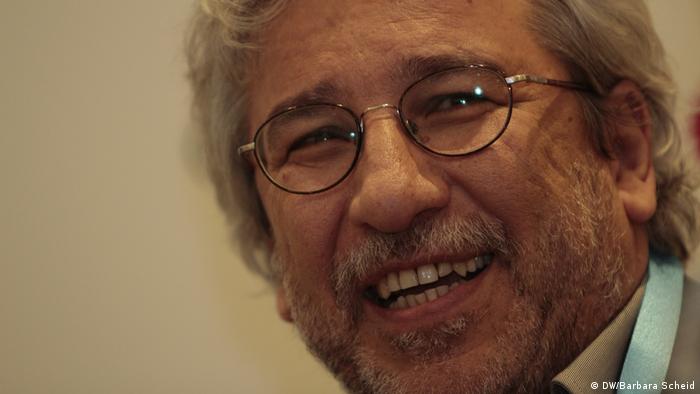 The wife of one of Turkey's most prominent exiled journalists has been reunited with her family in Berlin three years after her passport was confiscated.

Can Dundar, the former editor-in-chief of the main opposition newspaper Cumhuriyet, fled to Germany in 2016 after being convicted of espionage for publishing a story about Turkish arms shipments to Syria rebels.

Turkish authorities stripped his wife, Dilek Turker Dundar, of her passport in September 2016. She was unable to reunite with her husband or son, who studies in London.

On Friday, she posted a picture on Twitter standing together with her family in Berlin.

"For three years, my passport was illegally taken from me and I was prevented from leaving the country even though there was no investigation. I tried all legal avenues with no results," she wrote on Twitter. "The Constitutional Court didn't take up my case for two years. They did not comply with the constitution and the price I paid for trusting the legal system was being away from my family for three years."

"I finally used my right as a mother and rejoined my family. I hope that in the shortest time Turkey will return to the rule of law and other separated families will reunite with each other," she added.

Dilek told Germany's DPA news agency that she arrived in the country on Tuesday. The travel ban against her is still valid. She did not discuss how she fled Turkey without a passport.

A Turkish arrest warrant is still out for Can Dundar, who still faces up to life in prison for espionage, treason and terrorism-related charges.

His exile has been a cause of strain between Germany and Turkey.

A gunman attempted to assassinate the award-winning journalist in 2016 in front of the Istanbul courthouse where he had defended himself against charges of treason.

His wife and a parliamentarian were able to stop the shooter before he was able to fire more shots. Can Dundar was unhurt.

The gunman was sentenced to 10 months in prison.

Living in exile in Germany, journalist Can Dundar has been highly critical of the clampdown on the media under President Erdogan. In a DW exclusive, he wrote about the collapse of the independent press in Turkey. (15.05.2019)

Istanbul's mayoral election will be rerun following an appeal from the strongman-president's party. The exiled journalist Can Dundar gave DW his appraisal of the complex situation leading up to the June 23 election. (08.05.2019)