Former FIFA official Mohamed bin Hammam has admitted he received a payment from a World Cup organizing committee account after the awarding of the 2006 World Cup to Germany. However, he denied the money was a bribe. 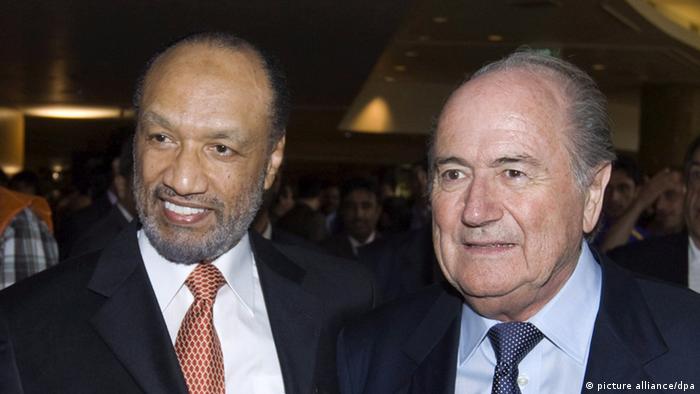 Mohamed bin Hammam, who was banned for life from football in 2011 in connection with allegations of vote-buying, said he had received a €6.7 million ($7.3 million) payment only after a decision had been made to award Germany the hosting of the tournament.

A former vice president of FIFA, football's world governing body, bin Hammam told German broadcaster ZDF's "Sportreportage" program that the sum had not been connected with the decision to let Germany stage the event.

"The €6.7 million have gone into my account, yes," bin Hammam said in an interview. "But I would like to know why Germany should have bribed me for something they have already received."

The decision on where the 2006 World Cup should be held was made in 2000. The sum was transferred in 2002, from a World Cup organizing committee account to a company controlled by bin Hammam.

'It's only you who cares'

When asked if the payment was linked to Germany being awarded the event, bin Hammam retorted: "I do not know. No, of course I know, but excuse me — it's only you who cares, no one else."

The head of the German Football Federation (DFB), Reinhard Grindel, told the German weekly sports magazine Sport Bild in December that he wanted to meet bin Hammam in Qatar to discuss the payment. Grindel said at the time that he had yet to receive a response.

Beckenbauer has denied that any bribes were paid in connection with the 2006 World Cup. He has said Germany's World Cup organizers wanted to secure the payment of an organizational cost subsidy from FIFA, although that claim has been denied by former FIFA President Joseph Blatter.

In the ZDF interview, bin Hammam also distanced himself from allegations that the awarding of the 2022 World Cup to Qatar was tainted. "They do not affect me all," said Bin Hammam. "These are just allegations and remain allegations."

The organizers of the World Cup in Qatar have denied any wrongdoing in the bid that won them the 2022 tournament. The latest allegations came in a report by a British Sunday paper. (01.06.2014)