Eva Högl: The new woman set to scrutinize the Bundeswehr | Germany| News and in-depth reporting from Berlin and beyond | DW | 28.05.2020 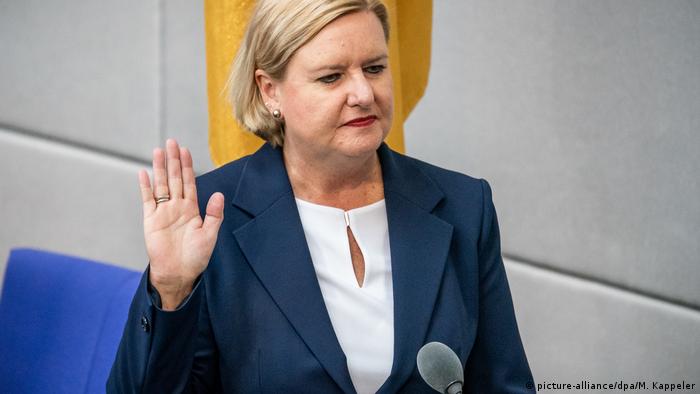 Eva Högl has a reputation for not pulling her punches in parliamentary debate. Now though, it is time for longtime politician to stand at attention and listen.

As the country's new parliamentary commissioner for the Bundeswehr, Germany's Armed Forces, the 50-year-old Social Democrat will have to be all ears to the worries and wishes of Germany's 184,000 men and women in uniform. Her mission will be to represent their interests and concerns in Berlin's political hub, as well as to detect problems in the Bundeswehr and make sure that parliament, the Bundestag, is in the picture.

"I have a big heart for the soldiers and their concerns. And if that hadn't been the case then I would never have said that I could imagine doing this job," Högl told DW.

The commissioners are supposed to be figures of trust for the soldiers in the Bundeswehr. Every member of the armed forces has the right to come to the commissioner with concerns, complaints, and proposals, without first approaching his or her person in command. Once a year the commissioners present a report to parliament on the mood within the forces. It includes specific grievances that have been put forward. One long-running problem: the lack of suitable equipment.

For Högl this is a key topic: "We have to ensure that our armed forces have the best possible equipment, especially when it comes to high-risk missions abroad."

However, she concedes that the financial strain of coronavirus pandemic might mean that this is going to be difficult, "to ensure that the right priorities in terms of the military and defense are anchored in the next budget. That is in part what my job is all about."

Since 2001 the Bundeswehr has women in its ranks. Their number stands at just over 22,000, which is about 12% of the overall total. Just under 6,000 of them are officers – a number that is on the rise. Combatting sexual harassment in the Bundeswehr is something Högl wants to focus on: "It's something I take very seriously indeed. It's entirely unacceptable. In any area of society, which naturally includes the Bundeswehr. I'm going to be looking very carefully at this whole area."

Commissioners of the Armed Forces are neither civil servants nor members of parliament. Their special public service status is enshrined in the Basic Law (the German constitution) and requires them to report to parliament rather than the defense ministry. After all, it is the German parliament that decides on the budget of the armed forces and has the final say over military deployments.

Commissioners for the armed forces have far-reaching powers. They may, for instance, visit military bases at home or abroad at any time. And they have access to access all documents kept by the defense ministry without prior announcement. Neither parliament nor the defense committee are permitted to impose special requirements in this respect — which it points out is unique in international comparison.

Read more: The Wehrmacht and the Holocaust on the battlefield

Combatting right-wing extremism in the military

When the post of commissioner for the armed forces was first created at the end of the 1950s, five years after the end of WW2, the main idea was to learn from the mistakes of Germany's Nazi-era army, the Wehrmacht. The commissioner got the job of subjecting Germany's armed forces to a regular and critical examination. The soldiers were called "Citizens in Uniform," in reference to the universal conscription which forced all young men into military service. Germany's postwar politicians came up with the notion of "Innere Führung" (internal leadership) — a system whereby all soldiers are expected to take individual ethical responsibility for their actions, based on the constitution, instead of blindly following orders. These constitutional values include human dignity, equality and democracy.

Despite efforts to learn from history, traces of militant right-wing extremism are to be found within the military until this day — and continue to make regular headlines. Military intelligence is currently investigating the cases of 550 Bundeswehr soldiers suspected of being involved in far-right activities. Figures from the Military Counterintelligence Service suggest that last year alone, as many as 360 new cases were being probed. And experts warn that this might just be the tip of the iceberg.

Högl is aware of this worrying situation. The Bundeswehr, she says, is a mirror of society as a whole: "Which is why the armed forces are not free of right-wing extremism. We have to look very closely to see what is going on within the ranks."

She points out that the defense ministry is aware of the problem, Military Counterintelligence Service has been revamped and is, she says, doing a good job. But, she is keen to stress that the vast majority of servicemen and women are absolutely committed to the values enshrined in Germany's constitution: "And I would like to encourage all of them to stay on track with me in coming together in telling the others that there is no place for right-wing extremism in the Bundeswehr."