The newly released financial aid package from the EU is aimed at helping the German economy rebound from the coronavirus. Chancellor Angela Merkel also called for closer EU coordination on travel rules within the bloc. 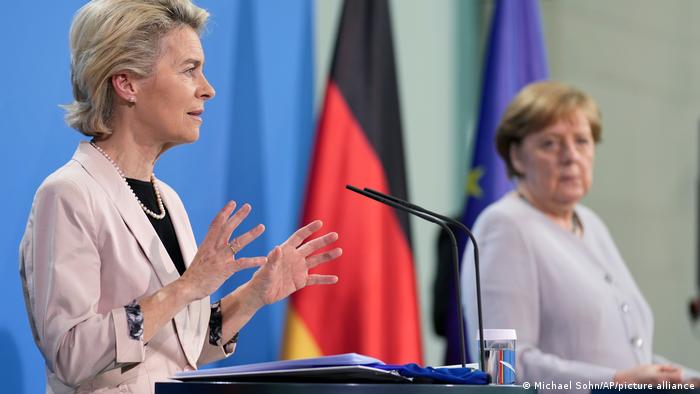 "It will support Germany to emerge from the pandemic stronger," von der Leyen said on Twitter. "The reforms and investments will help digitize and de-carbonize the economy to make it ready for the future."

Von der Leyen said 42% of the financial aid would be spent on climate change projects, with a substantial amount also used to help Germany transform into a more digital economy.

In addition, the European Commission on Tuesday approved a much larger €191.5 billion coronavirus aid package for Italy, although Rome will have to pay back most of the assistance. The entire aid package for the 27-member bloc totals €750 billion.

What else did the two leaders discuss?

Von der Leyen and Merkel also discussed a variety of other topics during their meeting, including coordinating travel rules, and migration policy.

In regards to coronavirus, Merkel said she hopes the EU will cooperate more closely on travel rules within the bloc.

"I regret that we haven't managed yet to have completely uniform action among the member states on travel guidelines — that is coming back to haunt us," Merkel told reporters, while highlighting the spread of the delta variant.

"We have made some good progress in recent months but aren't where I'd like the European Union to be," Merkel added.

Von der Leyen said she was "worried" about the delta variant, but added that pushing forward with vaccinations should prevent it from spreading.

Merkel added that she hopes the Union of European Football Associations (UEFA) will "act responsibly" in regards to holding the final Euro 2020 match in London, and criticized full stadiums planned for the semi-finals. The UK has been a major hub for the delta variant.

After the meeting, von der Leyen said the EU should continue financially supporting Turkey, which agreed to a 2016 deal with the EU in which Ankara agreed to keep migrants from reaching Europe in exchange for financial assistance.

"In my view it's important for us to continue to support Turkey, with its 3.7 million Syrian refugees," von der Leyen said. She added that some of the humanitarian assistance to Turkey could be shifted to socioeconomic help, as some of the migrants have been in the country for 10 years.

Merkel and Italian Prime Minister Mario Draghi also believe the 2016 EU-Turkey refugee deal should be extended. The agreement will be discussed during an EU meeting later this week.