Ursula von der Leyen has said the European Commission backs Greece's spending plans as the bloc looks to rebound from the coronavirus pandemic. Athens will receive loans and grants in return for economic reforms. 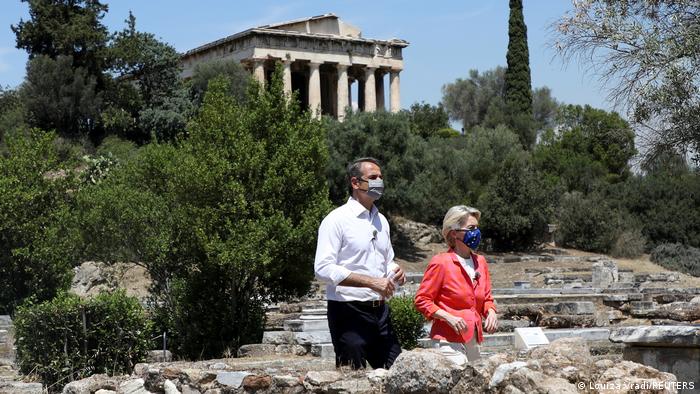 The European Union on Thursday backed Greece's pandemic recovery plan of some €30.5 billion ($36.4 billion) as the eurozone member looks to revive its coronavirus-hit economy.

The EU's green light "follows a thorough assessment by the Commission" of Greece’s plans, she said, announcing the backing for a package that includes a mix of loans and grants.

Greece has vowed to undertake a series of sweeping economic reforms in return for tapping a share of the EU’s €800 billion recovery fund.

The fund was set up last year to help EU member states deal with the economic fallout from the global pandemic.

Greek Prime Minister Kyriakos Mitsotakis said the plans were "a very important moment for Greece and for Europe."

The country's tourism-reliant economy shrank by as much as 8.2% in 2020, scuppering Athens's efforts to rebound from a series of international bailouts.

The European Commission's approval of Greece's rescue plan means it is all but certain that EU governments will support the decision.

Why does the Commission 'approve' budgets?

Officials at the EU executive won new powers in 2013 to vet member states' budgets as the bloc looked for ways to avoid a repeat of the 2010 sovereign debt crisis.

But its leaders rarely make endorsements of a country's budget plan without close consultations with EU capitals.

As many as 23 of the 27 EU governments have submitted their spending plans to the European Commission.

Diplomats there will be able to continually review whether they are sticking to their promises.