Eurovision has torn up Mango TV's contract after reports that it censored acts. Albania's heavily tattooed entry and Ireland's close dance by two men to a love song were cut from the Chinese company's semifinal program. 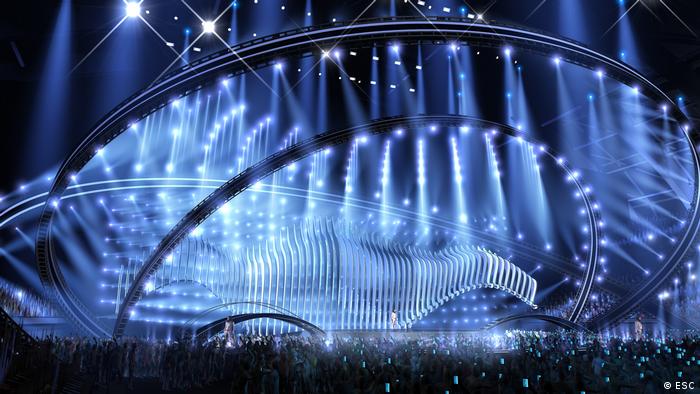 The European Broadcasting Union (EBU) terminated Mango TV's contract for the 2018 Eurovision Song Contest (ESC), leaving the Chinese online video service unable to air the ESC's second semifinal on Thursday and grand finale on Saturday. In Wednesday's broadcast of the semifinals, Mango TV, which had the exclusive rights to carry Eurovision in China, did not shown the heavily tattooed Albanian singer Eugent Bushpepa or an entry from Ireland that featured a romantic dance sequence by two men. It also blurred out rainbow flags waved by lesbian, gay, bisexual, transgender and intersex people (LGBTQ+) and their allies to signify pride.

In its statement, the alliance of public service broadcasters said censorship was "not in line with the EBU's values of universality and inclusivity and our proud tradition of celebrating diversity through music."

This year in Lisbon — the 2017 winner, honey-throated jazz-waltzer Salvador Sobral, hails from Portugal — musicians from 43 countries converged to compete before a global audience. It appears, however, that this year many Chinese fans will miss even more than usual of the song-and-dance show, with the EBU taking a stance against the government's censors.

Mango TV didn't explain the omissions. However, a spokesman for parent company Hunan TV told the news agency AFP that officials "weren't aware" of edits to the Eurovision broadcast.

China's government bans same-sex relationships on television and forbids gay-themed content from online streaming platforms. In January, the national media authority banned tattoos and other "decadent" subculture elements from broadcasts — scrubbing the screen of symbols that might run contrary to the ruling Communist Party's "values and morals." Chinese football players with tattoos wore bandages on their arms or long sleeves to cover up their ink during games in March, according to media reports.

Kitsch at its kitchiest, Eurovision has become known as "gay Christmas." Fans wave the rainbow flags to commemorate the long struggle for LGBTQ+ recognition throughout the finales — right alongside those of the participating nations. The bearded Austrian drag queen Conchita Wurst becamse famous after winning Eurovision in 2014 with "Rise Like A Phoenix" and used the visibility to advocate for LGBTQ+ people.

Coronavirus: Global GDP to sink by $22 trillion over COVID, says IMF 5h ago