If ESC votes went to contestants with the strangest costumes, the winner's podium would likely look quite a bit different. The Barbara Dex Prize for the most courageous stage outfits has given credit where it's due.

Dresses aflame, boleros with bat wings, helmets and tassel tops: Contestants on Europe's kitschiest song contest sure have created some imaginative looks for their stage performances.

While some of the more unusually dressed artists appear to have gone over well with the crowds — consider Finland's winning metal band, Lordi, who appeared in monster masks and horror costumes — others have suffered for their fashion faux pas. Like 19-year-old Belgian singer Barbara Dex, who took to the Irish stage in 1993 in an ankle-length chiffon gown resembling the curtains hanging at a grandmother's home and paired them with yellow ankle boots and blonde bangs.

Her love song took home just three points, all of them from Germany. Although there aren't any pictures of Dex in her unique attire, her legacy lives on both on Youtube and in an award that's been handed out every year since 1997: the Barbara Dex Award for the oddest, wildest or most courageous stage outfit. The prize was created by the fanpage "House of Eurovision," which now hosts the websitesongfestival.be.

While it remains to be seen just who will take home the Barbara Dex Award in 2018, there are a few strong contenders, including the Estonian entry. 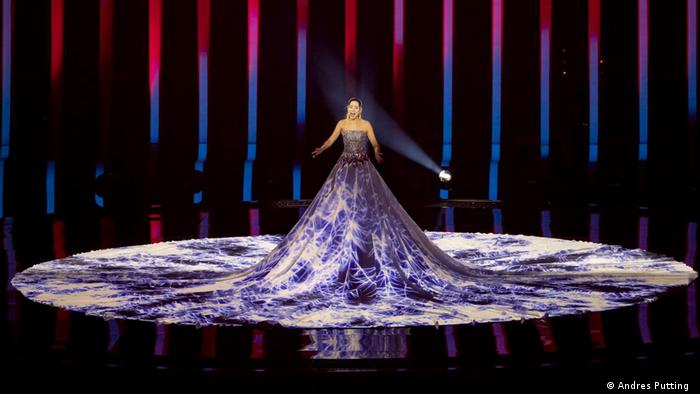 To see what good company she's in, we've collected a few of our favorite of these remarkable outfits to have appeared over the last 20 years in the picture gallery above.

Flame dresses, butterfly wings, sequined swim caps and bare feet. At Eurovision, no fashion faux pas is too great. We look back through the past decades at some of the song contest's most questionable fashion moments. (07.05.2018)