Supermarkets across Europe have withdrawn beef products linked to deforestation in Brazil. Corned beef, beef jerky and fresh prime cuts are among the products that won't be on some shelves much longer. 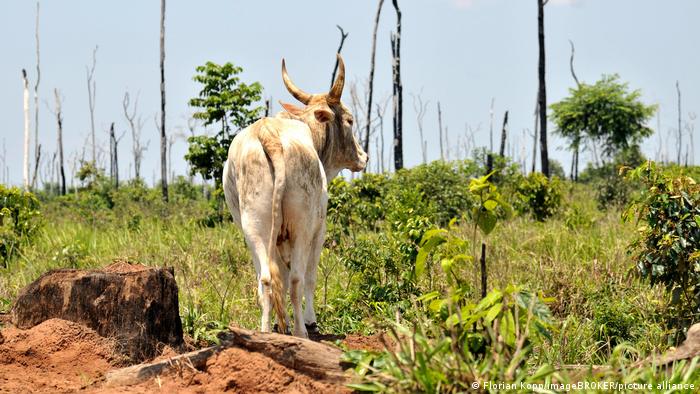 Multiple supermarkets across Europe have pledged to remove beef products that are linked to deforestation in Brazil, a US activist group announced on Thursday.

Chains including Carrefour Belgium, Delhaize and Auchan will be removing products. Other chains including Albert Heijn in the Netherlands, as well as Lidl and Sainsbury's and Princes in the UK, are also involved.

Products that are being withdrawn include corned beef, beef jerky and fresh prime cuts, which are suspected to have been sourced from cattle raised in the Amazon and the Pantanal tropical wetlands.

Reporter Brasil has alleged that JBS was involved in a scheme known as "cattle laundering," where cows are indirectly sourced cows from illegally deforested areas. In such a scheme, cows are raised on illegally deforested land, then sold on to a legitimate farm before being sent to the slaughterhouse, to obscure the origin of the cattle.

The widest-reaching pledge came from Lidl Netherlands, which said it would stop selling all beef originating in South America starting in 2022. The less dramatic moves were limited to halting sales of certain corned beef or beef jerky products.

"We look at the origin of the products that we would have in other countries — if we find any — to make similar decisions if the case arises," Agathe Grossmith, Carrefour's director of corporate social responsibility, told the AFP news agency.

A spokesman for Sainsbury's, which sources most of its beef products from Britain and Ireland, told AFP it was working to ensure proper sourcing of its corned beef products outside Brazil.

An Albert Heijn spokesperson told AFP: "We have now taken the decision to eliminate progressively Brazilian beef and are seeking out alternatives from other countries of origin."

Meat processor JBS told the Reuters news agency that it had zero tolerance for illegal deforestation and that it has already blocked more than 14,000 suppliers for failing to comply with its policies. It also said monitoring indirect suppliers was a challenge for the entire sector, but that JBS will institute a system capable of doing so by 2025.

Under the rule of far-right President Jair Bolsonaro, deforestation has soared in Brazil's Amazon, with Bolsonaro claiming it will lift people out of poverty.Deforestation hit a 15-year high in 2021, according to Brazil's National Institute for Space Research.

Most of the deforested land is used for cattle ranching.

Mighty Earth director Nico Muzi said in a statement that the "noose [is] tightening" around the necks of those involved in deforestation.

COP26: World leaders back deal to end deforestation by 2030