European Super League: Why are Bayern Munich and Borussia Dortmund not in it? | Sports | German football and major international sports news | DW | 19.04.2021 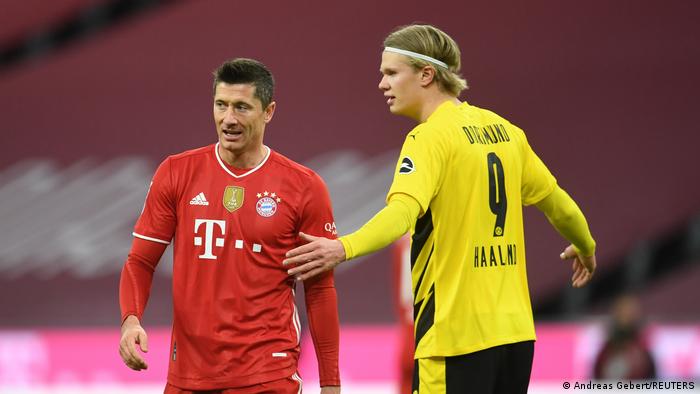 Neither Robert Lewandowski nor Erling Haaland will be playing in the Super League, as things stand

The so-called European Super League (ESL) may have enlisted the teams ninth in England, fourth in Italy and third in Spain but it will not feature the reigning European and World champions. At least, not yet.

Bayern Munich and Borussia Dortmund were notably absent from the plans for a breakaway league revealed in the depths of Sunday evening in Europe. It is believed that the two Bundesliga clubs, along with the other notable absentee — French champions Paris Saint-Germain — are unconvinced by the proposed new competition.

"It was the clear opinion of the members of the ECA Board that they reject the plans to create a Super League," said Dortmund CEO Hans-Joachim Watzke, adding that "both German clubs represented on the ECA Board, FC Bayern Munich and Borussia Dortmund, were 100% in agreement in all discussions."

"FC Bayern were not involved in the plans for a Super League. We are convinced that the current format in football guarantees a reliable basis."

"FC Bayern welcomes the reforms to the Champions League and we believe that this is the right step for the development of European football. The modified group stage will bring more excitement and emotion to the competition."

The statements go some way to clearing up the two clubs' position on the breakaway league, but there are a handful of other factors about the two clubs, and German football more broadly, that offer clues as to why Bayern and Dortmund have not taken their place at the table.

This is a big one. The vast majority of Germany's professional clubs, including Bayern and Dortmund, are governed by the 50+1 rule, which essentially enshrines majority member (or fan) ownership. This is designed to prevent private investors taking outright control of a club in the way seen in the Premier League. 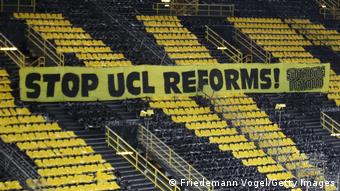 Given the vocal opposition to past talk of a Super League and to recent Champions League reform proposals, getting such a move past club membership would likely be an uphill battle. The timing of the ESL announcement, with fans not allowed in stadiums in most countries, makes protest harder. But fans of German clubs have often found a way.

Nevertheless, fans have been fighting a desperate battle in recent years to protect their stakes in their clubs. There have been some successes, with a commitment to the 50+1 rule as recently as 2018 and the successful campaign to scrap Monday night football.

Organized Bayern and Dortmund supporters have been among the most vocal critics of plans for a European Super League, and indeed the current UEFA Champions League reforms, but how far does their influence really stretch?

Football men at the top

Unlike most of the 12 clubs who have confirmed their presence in the ESL, Bayern and Dortmund are, generally speaking, run by ex-footballers who perhaps see things differently to those who have entered the game for purely commercial purposes.

As recently as January, Karl-Heinz Rummenigge, the Bayern CEO, said this about mooted plans for a Super League: "If the system changed, it could make it more difficult for many people to identify with football. It could cause serious damage to the national leagues, that is why I have my reservations. If I had to decide today for Bayern, I would decline." 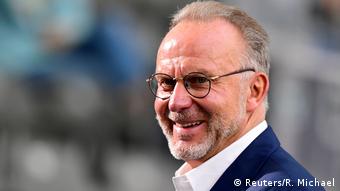 But there are notes of caution here. Firstly, news magazine Der Spiegel claimed in 2018 that Bayern had instructed a law firm to look in to the legal ramifications of leaving the Bundesliga as far back as 2016, so Bayern won't have been taken by surprise by the new plans.

Rummenigge's counterpart at Borussia Dortmund, Hans-Joachim Watzke, has been a little less clear. While Watzke told Kicker magazine in January that he "doesn't want a Super League," he also hinted that UEFA needed to come up with a Champions League model which better compensates the clubs.

"What we have to do is make sure that, within it, our interests and German sentiments are taken into account as much as possible," he told Spanish news agency EFE in 2019.

Borussia Dortmund, while ultimately controlled by their members who retain majority voting rights, are the only German football club listed on the German stock exchange.

One major stumbling block German clubs share with their counterparts in England, Italy and Spain is the opposition of their domestic league. Even before the official announcement of the ESL was made, the leagues were on the front foot, warning that any breakaway could mean expulsion from domestic competition.

"The DFL [German Football League] does not agree with any concept of a Super League," CEO Christian Seifert wrote. "The economic interests of big clubs in England, Spain and Italy cannot destroy the structures that exist in the whole of European football.