The European Parliament has voted overwhelmingly to dismiss one of its vice presidents. Ryszard Czarnecki of Poland's ruling PiS party had compared a rival Polish MEP to a Nazi collaborator. 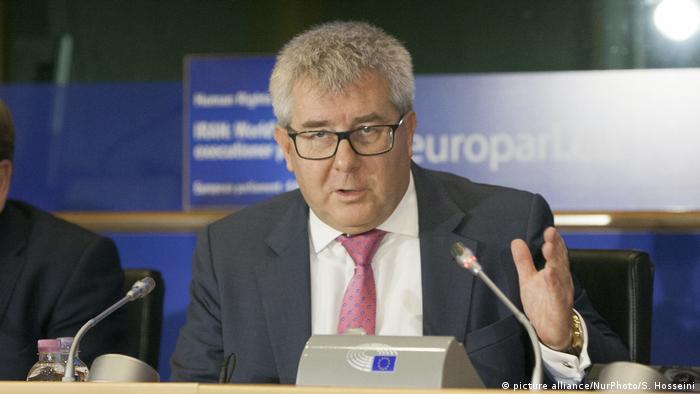 Czarnecki, who served as one of the parliament's 14 vice presidents under Antonio Tajani will continue serving as a member of European Parliament.

The PiS lawmaker was dismissed after he called Roza Thun, a rival parliamentarian from Poland's liberal-conservative Civic Platform party, a "szmalcownik" — a derogatory term referring to Poles who blackmailed Jews in hiding during the Nazi German occupation.

His slur came after Thun had told a German broadcaster that the ruling PiS party was moving the country towards a "dictatorship."

Wednesday's vote marked the first time that the EU's legislature has ever used its powers to dismiss a senior office holder.

Following Wednesday's plenary session in Strasbourg, Czarnecki told Poland's state news agency PAP, "I have been faithful to my views" in chiding lawmakers who complain about Poland abroad.

Josef Weidenholzer, the vice president of the parliament's Socialists and Democrats group, said Czarnecki's comment "went far beyond what is acceptable political discourse."

Jo Leinen, an MEP from Germany's Social Democrats tweeted: "Attacking other members with Nazi slogans is a no go."

Ahead of the vote, Poland's Foreign Minister Jacek Czaputowicz admitted that Czarnecki had gone "too far" with his remarks, but said dismissing him would violate freedom of speech.

The Polish lawmaker had in the past also compared Poland's EU membership to its time as a Soviet satellite state.

Czarnecki's dismissal came as the PiS government attracted an array of international criticism, particularly from the US and Israel, over a controversial new law that penalizes certain statements about the Holocaust. The legislation allows the government to jail anyone who, "publicly and against the facts," suggests that Poles or Poland had any involvement in Nazi war crimes committed during World War II.