The European Union has said it will introduce retaliatory measures against US plans to impose steel and aluminum tariffs. The WTO and IMF have voiced their concerns over US President Donald Trump's threat of a trade war. 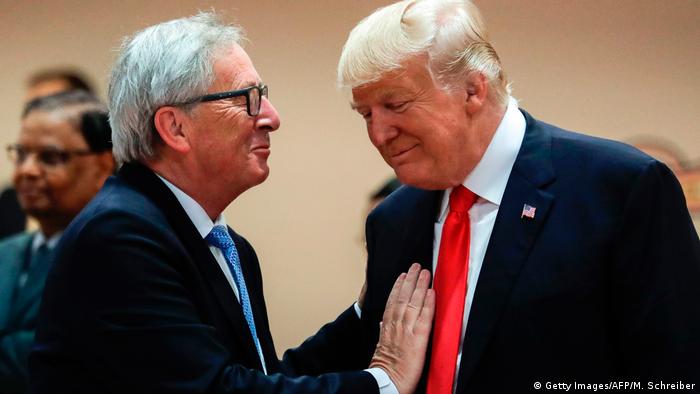 "None of this is reasonable, but reason is a sentiment that's very unevenly distributed in the world," Juncker told reporters in the German city of Hamburg.

Asked if Europe faced a looming trade war with the US, the president of the EU's executive body said: "I can't see how this isn't part of war-like behavior."

According to news agency Reuters, EU officials began drawing up a list of $3.5 billion-worth (€2.8 billion) of US goods that would be subject to a 25 percent tariff. Unnamed sources said the measures aimed to "rebalance" bilateral trade, should Trump follow through with his plan to impose a 25 percent levy on steel and 10 percent levy on aluminum.

The list includes typically American goods such as bourbon and blue jeans, to Harley Davidson motorcycles.

"We are here and they will get to know us," Juncker said. "We would like a reasonable relationship to the US, but we cannot simply put our head in the sand."

The Commission also insisted that any retaliatory measures would comply with rules set out by the World Trade Organization (WTO).

According to European steel association Eurofer, the US was the destination of about 15 percent of Europe's steel exports in 2017. US steel, by comparison, only made up 1 percent of EU steel imports.

With global stock markets tumbling in the face of a brewing trade war, European Commission Vice President Jyrki Katainen sought to offer a degree of reassurance, insisting "there is a little window of opportunity still open" and that Europe was posing a danger to the US.

France's Finance Minister Bruno Le Maire also said he was planning to hold talks with his German and British counterparts on how to respond to Trump's proposed tariffs.

Le Maire told reporters in Paris: "The US must know that if these unilateral decisions were to be maintained and confirmed, they would lead to a strong, coordinated and united answer from the European Union."

On Friday morning, Trump doubled down on his tariff proposals, tweeting: "When a country (USA) is losing many billions of dollars on trade with virtually every country it does business with, trade wars are good, and easy to win. Example, when we are down $100 billion with a certain country and they get cute, don't trade anymore-we win big. It's easy!"

WTO Director General Roberto Azevedo said his agency was "clearly concerned" by Trump's threats, adding that "a trade war is in no one's interests."

"The potential for escalation is real as we have seen from the initial responses," Azevedo said in a statement.

The International Monetary Fund also warned on Friday that Trump's tariffs would damage the US and global economies.

"The import restrictions announced by the US President are likely to cause damage not only outside the US, but also to the US economy itself," IMF spokesman Gerry Rice said.

Rice said fears of a trade war could prompt other countries "to justify broad-based import restrictions," but urged leaders to refrain from harsh measures. "We encourage the US and its trading partners to work constructively together to reduce trade barriers and to resolve trade disagreements without resort to such emergency measures," he said.