The EU and its mostly Muslim southern neighbors agreed to a watered down "joint code of conduct" against terrorism, ending a lackluster summit in Barcelona. 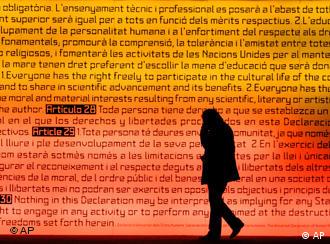 Writing on the wall: An illuminated backdrop listed the summit's aims

The European Union signed a last-minute agreement with its partners from the Mediterranean rim on a joint code of conduct to fight terrorism. But clear tensions remained after a summit clouded by the absence of most Arab leaders.

Discord over the definition of terrorism marked the two-day
gathering, which was portrayed by the European Union as a bid to revitalize a 10-year-old partnership with its southern neighbors. 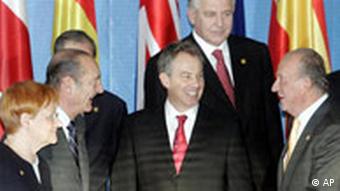 Most EU leaders attended, while Arab heads of state gave it a miss

Debates over what constitutes terrorism, and the Israel/Palestinian question, raged late into the night on Sunday and were taken up again Monday morning.

'Definitions will run their course'

In the end, an agreement was struck only after a compromise omitted both the EU's insistence that self-determination could not be used to justify terrorism, and the Arabs' demand to distinguish between terrorism and the right to resist foreign occupation.

"It's as strong a statement as you can possibly have on the
unified determination to fight terrorism in all its forms,"
said British Prime Minister Tony Blair, who co-chaired the two-day summit in Barcelona.

Blair hailed the code of conduct, saying "terrorism can never be justified. ...This is a very important moment both for the European countries and for our other colleagues around the table."

He added: "Definitional issues will run their course."

The summit also resulted in a raft of initiatives to combat
illegal immigration, while fostering legal migration flows as a
means of allowing wealth to flow from north to south.

But the leaders were unable to agree on a planned common
vision document because of differences over what to say about the Israeli-Palestinian conflict. Instead the presidency issued a statement calling for a just, two-state solution.

The summit was clouded by the pointed absence of most Arab leaders. While most European Union heads of state attended, all but two of the ten Middle East group members only sent ministerial-level delegates.

Tensions bubbled over late Sunday when an Algerian minister lashed out at EU demands for reform in exchange for more money. 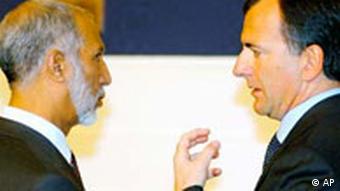 "We find it humiliating that the Europeans demand reforms from us in exchange for a few euros," said Abdelaziz Belkhadem as the summit opened to mark the 10th anniverary of the so-called Euro-Mediterranean partnership.

The summit set the stage for a first meeting between Turkish Prime Minister Recep Tayyip Erdogan and new German Chancellor Angela Merkel. She accepted an invitation to visit Turkey and pledged to respect commitments made to Ankara on EU accession talks, despite her own doubts about Turkey's EU bid.

Without commenting herself on Turkey's aim to join the union, Merkel made it clear that the talks begun in October would continue.

"We talked about 'pacta sunt servanda' (pacts are made to be obeyed) and we expect positive developments," she said.

"The atmosphere was good and it was always good between us," she added. Erdogan said he would visit Germany following Merkel's planned trip to Turkey in 2006. 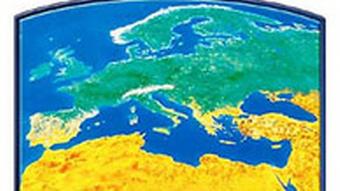 The summit was meant to be the first time leaders of a group that includes Israelis and Palestinians as well as the 25 EU countries had met. Yet of the 10 Mediterranean-rim partner states, only Turkey and the Palestinian Authority sent their heads of state.

European and Mediterranean-rim leaders gathered in Barcelona Sunday for a first-ever summit between the regions, but the absence of most Mideast chiefs clouded hopes of relaunching a 10-year-old partnership. (Nov. 27, 2005)

Britain urged the European Union on Wednesday to toughen up its fight against terrorism, and reassess its human rights laws that prevent the deportation of suspected terrorists. (Sept. 7, 2005)