The German transport minister has proposed tougher EU rules on emission control systems in diesel cars following the dieselgate scandal at Volkswagen, but was snubbed by the EU Industry Commissioner. 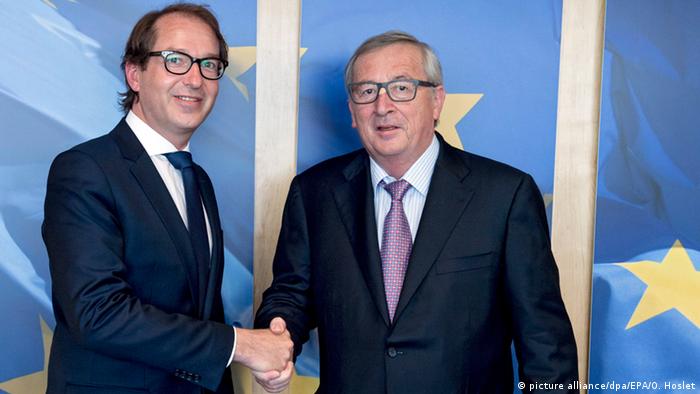 German Transport Minister Alexander Dobrindt told a meeting of his EU counterparts on Tuesday that a study of 50 diesel cars released in April exposed irregularities in pollution emissions tests similar to those seen in the Volkswagen scandal.

Dobrindt said a commission of inquiry set up in Germany had found that 16 major car brands - ranging from France's Renault to Italy's Fiat to Japan's Nissan - showed up irregularities, even though these did not involve the illegal technology used by VW.

"Some of the vehicles we tested seemed to show that the defeat devices installed were appropriate and the manufacturers could justify them and therefore they were a legal installation," Dobrindt said.

However, doubts had emerged in some of the vehicles tested, Dobrindt added "as to whether these devices were being correctly used and only being used in cases of protecting the engine against damage."

VW opens up about emissions scandal

Such adaptations are legal under EU law if they are needed to protect the car's engine. But Germany would like to see that exception be more stringent, limiting the use of such devices to those cars where "even if the best available technologies are included, no other technology is available."

Therefore, the German minister proposed tighter new laws which would compel auto makers to make an argument upfront for the presence of defeat devices in their cars.

Moreover, Dobrindt recommended that the European Commission, the EU's executive arm, explored ways to widen vehicle testing and avoid dangers of conflict of interest. Under current EU law, each car manufacturer wins the green light through a national regulator that allows it to sell the vehicles across the EU.

But critics have accused regulators of bias and for going too easy on their national carmakers - such as France with Renault or Britain with Land Rover.

In response to the German demand, EU industry commissioner Elzbieta Bienkowska, however, downplayed the need for new rules, saying that European law is very clear on the use of defeat devices.

"Carmakers will always try to find ways around legislation: enforcement is the problem," she told the EU ministers.

While Dobrindt said Germany would continue to push for changes at further EU-level discussions, the German Environment Ministry warned the automobile sector against trying to oppose the reform. Deputy Minister Jochen Flasbarth said in Berlin the trust that the industry had long enjoyed was gone.