EU response to Belarus protests hampered by internal divisions | Europe | News and current affairs from around the continent | DW | 21.09.2020

The EU says it needs more than the six weeks of documented violence so far to agree on sanctions against Belarusian officials. The lack of action highlights the bloc's ongoing struggle for foreign policy consensus. 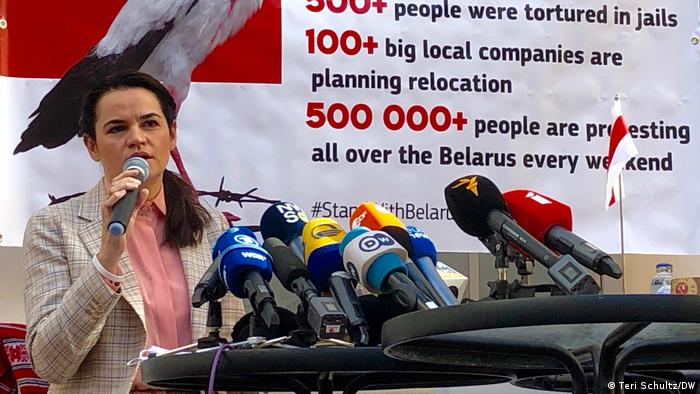 Sviatlana Tsikanouskaya's fervent call for European Union courage — backed up by the photos she shared of beaten and bruised protesters in Belarus — wasn't enough to forge the necessary consensus against those deemed responsible for the violence and alleged vote-rigging in the country's August 9 presidential elections. The Cypriot government refuses to budge on blacklisting more than three dozen Belarusian officials unless and until Turkey is also penalized for drilling activities off the Cypriot coast.

"It's definitely lamentable, some colleagues linking events and developments which shouldn't be linked," Lithuanian Foreign Minister Linas Linkevicius told DW after the meeting. "I hope it will be solved but nevertheless, it's definitely disappointing."

The three Baltic states have already imposed their own sanctions on Belarusian individuals including embattled President Alexander Lukashenko. Linkevicius underscored that while EU-wide agreement on punitive measures was not possible Monday, foreign ministers did agree that "we have to send a clear message to not just the Belarusian people that we will not leave them deserted but also to the outgoing leadership, that they have no right to speak or to act on behalf of the Belarusian people."

Nonetheless, since the sanctions were agreed by foreign ministers in principle in August, their nonexistence now is a highly visible reminder of the elusiveness of EU unanimity. After the meeting, Borrell acknolwedged he "understand[s] perfectly that our credibility is at stake" in failing to respond to the Belarusian regime's behavior. "Be patient," he urged, saying he expected it would be possible to move ahead on the measures at the very latest by the next foreign ministers' meeting in a month, if not at a leaders' summit later this week.

Former Estonian President Toomas Ilves says that credibility may already be shot. "This is a disaster for the European Union if there are no consequences," Ilves told DW. "It certainly makes it easier to laugh at the proposition that the European Union is a democracy project if it allows the most grotesque suppression and violation of human rights on its border — the border with three EU countries — and does absolutely nothing."

But Joerg Forbrig, director for Central and Eastern Europe at the German Marshall Fund and a specialist on Belarus, suggests there's too much focus on the travel bans and asset freezes he considers "way too weak an instrument to respond to this grave violation of the human rights of Belarusian people."

Forbrig acknowledges sanctions are important as a signal. "But I also acknowledge that they will not do anything to change the current dynamics and behavior of the regime," he said, adding that the enormous energy the pursuit of consensus requires is often disproportionate to their effectiveness.

He says Belarus may be one of those situations, explaining that a bigger impact for the people of Belarus could be made by offering help such as medical treatment, legal assistance and psychological rehabilitation. "This is more a matter of will and money than than of politics," he said.

The struggle for EU consensus

Ilves, who is now a senior fellow with the Center for European Policy Analysis, says the Belarus example illustrates the need to allow more agility in EU foreign policy by expanding the range of decisions that can be made without unanimity. This is a longstanding issue European Commission President Ursula von der Leyen referred to in her recent state of of the union speech as well. Lithuanian Foreign Minister Linkevicius, however, said he doesn't see this as a "silver bullet" as it doesn't solve the underlying problem of solidarity.

Franak Viacorka, an Atlantic Council analyst now serving as an advisor to Tsikanouskaya, seemed undaunted by the sanctions setback in Brussels due to the mounting momentum in his home country. "We had more than 120,000 [demonstrators] yesterday," Viacorka said, noting that he expects protests to continue to grow in coming weeks, along with strikes. "If workers stop their operation, that would be huge heat on the system," he said, predicting then "Lukashenko will have to agree on the dialogue" with the opposition Coordination Council proposed by Tsikanouskaya.

They're demanding new elections be included in that way forward, but Tsikanouskaya made clear she does not intend to be a candidate again.