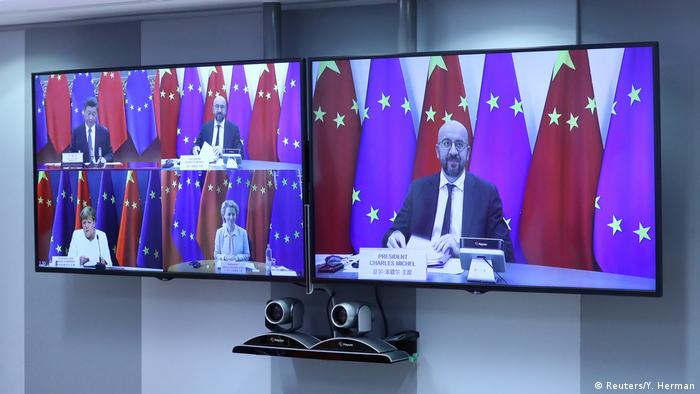 European officials on Monday called on Beijing to open up markets and uphold human rights at a virtual EU-China summit.

"In the last 15 years, China has become much stronger economically and this means that the demand for reciprocity — for a level playing field — is of course very justified today," German Chancellor Angela Merkel told a virtual press conference.

The summit was initially envisioned as the scene for a major breakthrough in EU-Chinese relations. However, a series of setbacks, including the coronavirus pandemic, forced officials on both sides to take the summit online.

From Xinjiang to Tibet

EU officials also pressed China to allow access to Xinjiang, where Chinese authorities are accused of placing an estimated 1 million Uighurs into internment camps for their religious beliefs. Beijing says the camps are meant to combat extremism.

"We reiterated our concerns over China's treatment of minorities in Xinjiang and Tibet," said European Council President Charles Michel. "We asked for independent observers to Xinjiang and we called for the release of the arbitrarily-detained Swedish citizen Gui Minhai and two Canadian citizens."

Searching for an opening

At more than a billion euros in daily bilateral trade, China's largest trading partner is the EU, making it a key market. Although officials have yet to comment on moderating their trade arrangement, observers have suggested that the EU could tighten Chinese access to the single market.

However, despite the critical remarks from European officials, the EU and China signed a deal to mutually protect exported food and drink items. The deal was hailed as a major victory for the EU as it means that producers in the United States, Australia and New Zealand can no longer use protected European food names when exporting to China.

"Engagement at the highest level with China is crucial if we are to promote European economic interests, protect our climate and defend fundamental values and rights," said European Commission President Ursula von der Leyen. "We are really serious about having access to the Chinese market."