EU Pledges Help in Estonia-Russia Row | Europe | News and current affairs from around the continent | DW | 01.05.2007

The European Union has promised to help end a virtual siege of the Estonian embassy in Moscow sparked by the removal of a Soviet-era war memorial in Tallinn, Estonia's Foreign Minister Urmas Paet said Tuesday. 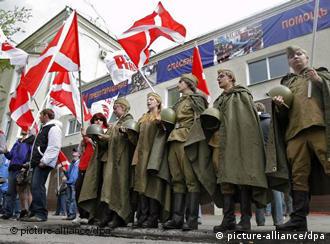 Foreign Minister Paet said he had spoken to his German counterpart Frank-Walter Steinmeier who "promised speedy assistance from the European Union to normalize the situation around the Estonian embassy in Moscow."

Germany currently holds the rotating presidency of the EU.

About 100 youths from pro-Kremlin organisations Young Guard and Ours have ringed the Estonian embassy since Friday, chanting anti-Estonian government slogans and pointing the barrel of a green inflatable tank at it.

The protest came after Estonian authorities removed a controversial Soviet war memorial from central Tallinn for relocation at a military cemetery.

Estonians see the statue -- a monument to Red Army soldiers who died while fighting fascist forces during World War II -- as a reminder of 50 years of Soviet occupation.

One Russian demonstrator broke into the grounds of the Estonian embassy in Moscow on Tuesday afternoon and cut down and desecrated its flag in a row over the fate of a Soviet war memorial. 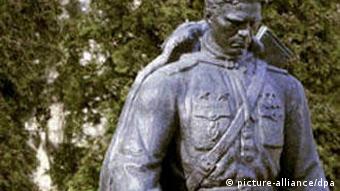 Estonia and Russia have been at loggerheads for months over Estonian plans to remove a Red Army war memorial from its current location in central Tallinn to a nearby war cemetery.

And on Tuesday afternoon a group of demonstrators broke through the first of two fences surrounding the embassy. One man then jumped the second fence, cut the Estonian flag down from its nine-meter staff and began cutting it up, Persidski said.

"The militia caught him as he tried to get away and returned the remains of the flag to us. We put up a new one," he added.

The leader of the Young Russia movement, which is conducting the siege, said that the men were not part of his organization, the Baltic News Service BNS reported.

But Estonia's ambassador to Russia, Marina Kaljurand, told the Echo Moskvy radio station that the blockade could only take place with the "tacit agreement" of the Russian authorities, Persidski said.

Estonian archeologists finished their search for the coffins of soldiers buried at the site in Tallinn on Tuesday evening, the Estonian defence ministry announced.

According to initial information from the site, a total of 12 coffins of fallen Red Army soldiers have been found, defense ministry spokeswoman Aet Kukk told the German news agency dpa.

The soldiers are to be exhumed and taken to a morgue for forensic examination and possible identification. The ministry then plans to rebury them in a Tallinn war cemetery, to which the statue which guarded them has already been moved, Kukk said.

And the Estonian defence forces will hold memorial ceremonies in the cemetery both on May 8 -- the anniversary of the end of World War II in Western Europe -- and at the end of June, when the complete memorial complex is scheduled to be re-inaugurated at its new site.

Felix Mendolssohn Bartholdy, E.T.A. Hoffmann, Marlene Dietrich, Willy Brandt, Rosa Luxemburg and Karl Liebknecht all have something in common: their graves are to be found amidst Berlin's myriad assortment of cemeteries. (21.04.2007)

Estonians Vote to Further Break From Their Past

Estonians streamed to polling stations Sunday to cast traditional paper-ballot votes in the EU newcomer's parliamentary election, the first in the world to have allowed voting by Internet. (04.03.2007)