Merkel Calls Putin Over Missile Row and Violence in Estonia | Europe| News and current affairs from around the continent | DW | 28.04.2007

German Chancellor Angela Merkel spoke to Russian President Vladimir Putin Saturday to discuss the growing controversy over the proposed US missile shield and to hear his views on the escalating violence in Estonia. 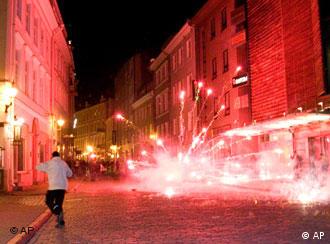 The two leaders had also discussed Putin's warning, issued to the Russian parliament Thursday, that Russia would declare a moratorium on the 1990 Conventional Forces in Europe treaty, if the US did not back down on the missile shield.

Merkel and Putin both attached great significance to relations between the European Union and Russia, the spokesman said.

German Foreign Minister Frank-Walter Steinmeier has adopted a moderate tone in the controversy, pressing the case for the stationing of interceptor missiles in Poland along with a radar station in the Czech Republic to be taken up at NATO level.

The US initially preferred bilateral arrangements with Poland and the Czech Republic.

Steinmeier's position came in for criticism from conservative members of Merkel's broad coalition, who urged a stronger line against Russia.

The government spokesman said Merkel had discussed a range of issues with Putin, including the situation in Ukraine and the EU- Russian summit May 17-18. Germany currently holds the EU presidency. 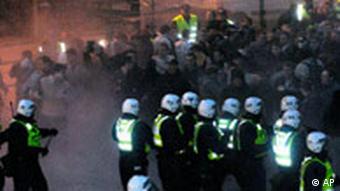 Riots have been raging in Tallinn since Thursday night

The chancellor also breached the topic of the escalating unrest in Estonia, which reached a deadly peak Saturday when a Russian national was killed in the Estonian capital during unrest sparked by the removal of a Soviet-era war memorial.

A surge in anti-Estonian sentiment was in evidence on the streets of Moscow and other Russian cities with protestors out in force, newspapers voicing outrage and shoppers boycotting goods from their Baltic neighbour.

Putin had voiced "serious concern" over the events in Tallinn during the telephone conversation with GMerkel, a Kremlin spokeswoman said.

Violence over monument leads to a Russian death 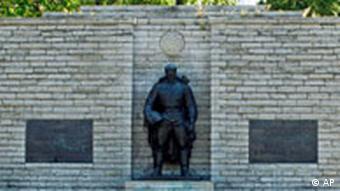 The statue was removed under cover of darkness early Friday

The row over the removal of a Soviet war memorial from Tallinn's centre erupted in riots that began there last Thursday, leading to 900 arrests and the death of a Russian citizen identified by officials only as Dmitri.

Estonians see the bronze memorial as a symbol of 50 years of Soviet occupation following World War II. The Estonian authorities removed the statue from the center of Tallinn early Friday after the first night of rioting, in which Dmitri was killed.

The German government statement Saturday said Merkel had urged both Putin and Estonian Prime Minister Andrus Ansip to keep a lid on the row by showing restraint and restoring parliamentary contacts as soon as possible.

The German government had suggested that the parliaments of the two countries should engage in direct contact over the conflict regarding the removal of the Soviet war memorial, government spokesman Ulrich Wilhelm said. 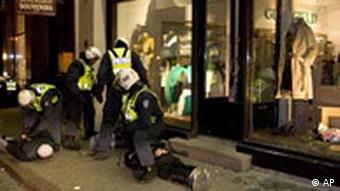 Estonian and Russian protestors clashed with each other and police

But at the Estonian consulate in Moscow about 150 members of two pro-Kremlin youth groups protested for a second day, chanting: "Fascism will not win!"

RIA Novosti news agency quoted a spokesman at the Estonian consulate in Moscow, Franek Persidski, as saying the consulate had temporarily ceased operations because of safety concerns.

In Saint Petersburg another 100 activists demonstrated outside the Estonian consulate, city police said.

They were stopped by police while attempting to unfurl a banner reading: "A spike in the head for the fascist beast, then the grave!" 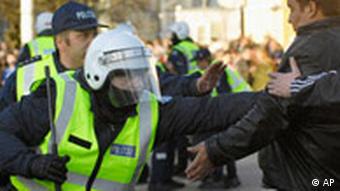 As the violence continues, Russia takes steps against Estonia

The Interfax news agency quoted the management of three major supermarket chains as saying they would no longer sell Estonian goods.

"We are against the removal of the soldier-liberator in Tallinn and consider such actions inadmissible," Interfax quoted a spokesman for the Sedmoi Kontinent supermarket chain as saying.

"In the next 48 hours all goods of Estonian origin will be removed from the assortment of products offered by our shops," the spokesman said.

"We are finally convinced. Estonia is a fascist state," thundered the Moskovsky Kosmolets tabloid, which in its headline used a stylized "SS" symbol in place of the letter "s" in the word Estonia.

The row marks a new low in relations between the countries, which have not seen eye-to-eye since the Soviet Union's 1991 collapse and the restoration of Estonia's independence.

Many Russians consider the statue in Tallinn to be a poignant memorial to the huge losses suffered by the Soviet Union in defeating Nazism and have complained at the status of ethnic Russians in Estonia, alleging discrimination.

NATO called for Russia to clarify whether it has actually frozen its application of a key arms treaty limiting the number of military forces in Europe as President Putin warned of an increase in the nuclear threat. (27.04.2007)

Estonians Vote to Further Break From Their Past

Estonians streamed to polling stations Sunday to cast traditional paper-ballot votes in the EU newcomer's parliamentary election, the first in the world to have allowed voting by Internet. (04.03.2007)