Britain will have to decide if it wants to take the deal, request a longer extension, or crash out of the bloc. One option could see the UK participating in the European elections. 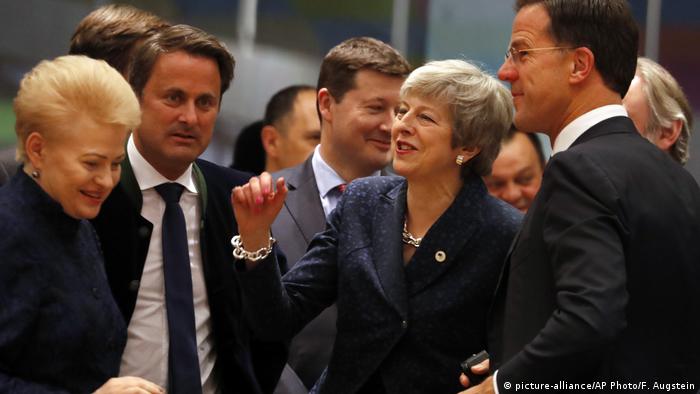 The UK has been seeking an extension for the Article 50 exit process to allow for an orderly exit.

European Council President Donald Tusk said: "The UK government will still have a choice of a deal, a no deal, a long extension, or revoking article 50. The 12th of April is the key date in terms of the UK deciding whether to hold European Parliamentary elections. If it has not decided to do so by then, the option of a long extension will automatically become impossible."

European Commission President Jean-Claude Juncker said the remaining 27 member states had backed up his legal offers to the UK on the Irish backstop,  also known as the Strasbourg Agreement.

British Prime Minister Theresa May said she had accepted the EU's offer and welcomed the confirmation of the Strasbourg Agreement. She called on British MPs to accept the deal, saying it would be wrong to participate in the European elections.

German Chancellor Angela Merkel welcomed the compromise after an "intensive, but successful evening."

What are the chances of a no-deal Brexit?

Luxemburg Prime Minister Xavier Bettel said he gave the British Parliament a 51 to 49 chance of passing the deal. He said the best outcome would be for the UK to hold a second referendum and vote to stay in the bloc.

French President Emmanuel Macron told EU leaders that he now thought there was only a five percent chance of the deal passing, according to Reuters. He had given the deal a 10 percent chance before he spoke to May.

Critical extension: The new offer will grant May critically needed time to push her twice-rejected deal through parliament and avoid a hard Brexit. The offer could also keep alive the remainers' dreams of staying in the EU as well help scare Brexiteers into accepting the deal to avoid such a scenario.

EU likely to delay Brexit until EU elections in May

Leaders of EU states are willing to push the Brexit date to May 22, just ahead of European elections, according to a draft statement. This still hinges on the UK Parliament accepting Theresa May's Withdrawal Agreement. (21.03.2019)

Leaders of the 27 remaining members of the EU will start their council meeting in Brussels with Brexit at the fore. But other items are on the agenda, such as relations with China, the economy and climate protection. (21.03.2019)

Tusk said he took the role with the Civic Platform party to "fight the evil" of the country's conservative leadership. He helped establish the party in 2001 and led Poland as prime minister for two terms.

French President Emmanuel Macron and Commission President Ursula von der Leyen voiced support for rewriting the bloc's treaties during a conference on the EU's future that was dominated by the war in Ukraine.