Pro-Brexit MP: Leave EU with May′s deal or risk remaining | Europe| News and current affairs from around the continent | DW | 21.03.2019

UK lawmakers have twice rejected Theresa May's Brexit deal, but the threat of not leaving the EU at all has worried hardliners in her party. Are the die-hards giving up? DW asks pro-Brexit MP Nigel Mills.

"Brexit means Brexit – and we’re going to make a success of it," UK Prime Minister Theresa May said in the weeks after the EU referendum in 2016.

The prime minister could well make a success of Brexit yet, but the chances of her premiership surviving until Britain leaves the EU are rapidly falling, while those who voted to remain hope a lengthy delay could help to stop Brexit altogether.

That is a calculation many of May's MPs are making, including Conservative pro-Brexit MP Nigel Mills. "The choice now is to leave with this deal or to risk not leaving at all," he told DW's Conflict Zone.

Mills voted against ratifying Theresa May's deal at the first time of asking in January, contributing to a historic defeat for the government, but supported it at a second vote, where it was defeated again but by a smaller margin. 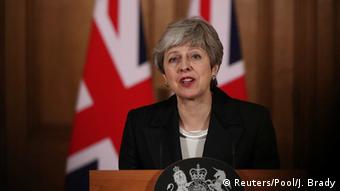 In a letter to Donald Tusk, the prime minister seemed to suggest she would quit if forced to accept a delay to Brexit beyond June 30

John Bercow, the speaker in the House of Commons, cast the Brexit process into even greater disarray when he told UK lawmakers on Monday that the UK government could not put the deal to a vote for a third time without substantial changes.

At a summit on Thursday, May hopes European leaders will agree to give her more time to find a way through the Brexit blockage. But while EU leaders might offer May some helpful clarifications or legal interpretations, said Mills, "I don't think the substance of the deal's going to change at this stage." 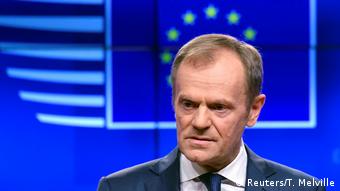 European Council President Donald Tusk said he believed "a short extension will be possible," but it would be conditional on May winning a vote in the UK parliament on her deal

Having campaigned in the referendum to remain in the EU, the prime minister keenly took to proving herself as a committed Brexiter, casting those who saw themselves as world citizens as "citizens of nowhere."

She embraced the euroskeptic wing of her party, which includes the hardline European Research Group (ERG) bloc chaired by MP Jacob Rees-Mogg, pursuing a so-called "hard Brexit" by leaving the single market and ending freedom of movement between Britain and remaining EU members.

Why had the ERG, of which Mills is a member, set itself up as arbiters of a true Brexit?

"Everyone has to take their own view on what true Brexit is but I think what we've been doing is trying to actually deliver the Brexit we promised the people in a manifesto we had a general election on," said the UK parliamentarian.

Hardliners saw Theresa May's "Chequers plan" as a betrayal of the referendum result and the influential ERG tried to oust her by triggering a vote of no confidence in December, which she survived by 200 votes to 117.

Mills said that it wasn’t "honorable politics" to divert from what had been promised by the party at the 2017 general election.

"It's regrettable that the prime minister chose to change the direction of the future relationship last summer and that's what's brought most of this problem around.

"Until then she had almost complete support from the ERG and it was the people who wanted to remain who were causing the problems in the party."

Under Conservative party rules, May's leadership cannot be challenged again until December, but the internecine struggles – between leavers and remainers, soft Brexiters and hard Brexiters, loyalists and potential challengers – continue.

He said that Brexiters had made several compromises, including accepting a 21-month transition period and a "divorce bill," but "what we couldn't compromise on was not taking back our independence and being free to control our own affairs."

One way out of the impasse could be a general election, but Mills said he wasn't sure what this would change or that the parliament returned by the voters would look very different.

"I think we need to fix it in this parliament and the obvious fix now is to vote the prime minister's deal through and move on to the next stage of these talks."

Theresa May has asked the European Union for a short extension of the Brexit deadline. But it's unclear whether EU officials will accept a deadline after European parliamentary elections in May. (20.03.2019)