EU looks to contain Russian influence in the Balkans

Along with dealing with Poland's lashing out at the EU, Thursday's summit in Brussels focused on uncertainties brewing among EU neighbors. The western Balkans must not be left to Russian influence, says Bernd Riegert. 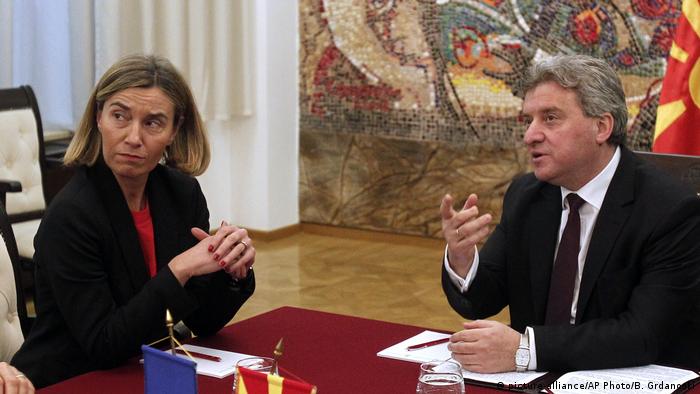 Federica Mogherini, the EU foreign affairs chief, meets with Macedonian President Gjorge Ivanov in Skopje on March 2 on her mission to address political instability in the Balkan nation

The European Union has more to contend with than just Poland. At a summit in Brussels, EU diplomats voiced concern over developments in the Balkans. EU Foreign Affairs Commissioner Federica Mogherini recently visited the region and painted a dark picture for summit participants at a closed-door dinner. Russia is looking to insert itself into the region's governments, ethnic groups and decision-making.

"I saw a region that is more than ever characterized by tension and challenges at various levels," she said at an earlier meeting with EU foreign ministers, adding that the Balkans were at risk of becoming a geopolitical chessboard. "The concern is there and it is significant. Moscow's presumable goal is to loosen the region's connection to the EU and present Russia as an alternative to a dissolving union."
Mogherini was booed during an appearance last week at Serbia's parliament. Members of the nationalist Serbian Radical Party chanted: "Serbia! Russia! We don't need the [European] Union!"

EU membership for the Balkans, at some point

In response, EU heads assured the six western Balkan states of the EU's "unwavering support" in their quest to formally join the European community, as determined by each candidate country's membership readiness. "We are keeping our promise," said Donald Tusk, the newly re-elected president of the European Council. That could take years for more fragile countries such as Bosnia and Herzegovina.

"We are committed to providing more assistance to strengthen European values in these countries," said German Chancellor Angela Merkel. The situation in the region is "complicated," she added. An EU diplomat experienced with the Balkans criticized the EU for having "neglected" the region, having gotten lost amid a litany of crises, among them migrants and Ukraine, with the Balkans becoming known as a route for refugees to reach Europe.

Macedonia remains locked in internal crisis. Serbia refuses to recognize Kosovo's status as a state – something most EU members do and Russia does not – while the ethnic Serbian region of Bosnia and Herzegovina is threatening secession. Montenegro's parliament is deadlocked, its NATO membership was denied by Russian opposition, and Russia is suspected of being behind the country's failed coup last year.

Although Russia was not directly named in the summit's statement, it was clear in which direction the finger was pointing. Austrian Chancellor Christian Kern called on his colleagues not to let Russia fill the vacuum being created by a retreating United States.

EU officials are frustrated that nationalist tendencies remain the norm, 20 years after a devastating civil war in the Balkans. The EU created a western Balkan conference three years ago with the aim of bringing Balkan states closer to the EU and encouraging dialogue among them. The conference has already taken place in Berlin, Vienna and Paris. This year's iteration will happen in Italy. UK Prime Minister Theresa May announced her country's interest to host talks in 2018, regardless of Brexit developments.

The EU has called for good neighborly relations among the Balkan countries, requiring democratic institutions to uphold the rule of law as well as economic development as prerequisites for EU membership. In exchange, the EU has pledged to provide support at all levels. Financially, that has amounted to more than a half-billion euros this year, and there are no plans to amend that budget. New EU membership has been frozen during Jean-Claude Juncker's tenure as president of the European Commission. For now, EU talks about who might leave appear to have taken precedence over who might join.

NGO Human Rights Watch has sharply criticized the numerous attacks on independent journalists and press freedom across the Western Balkans. (02.12.2016)