The European Parliament has told Poland's euroskeptic government to resolve a constitutional crisis that has left the country's top court paralyzed. Warsaw said it is seeking to address a mandate for reform from voters. 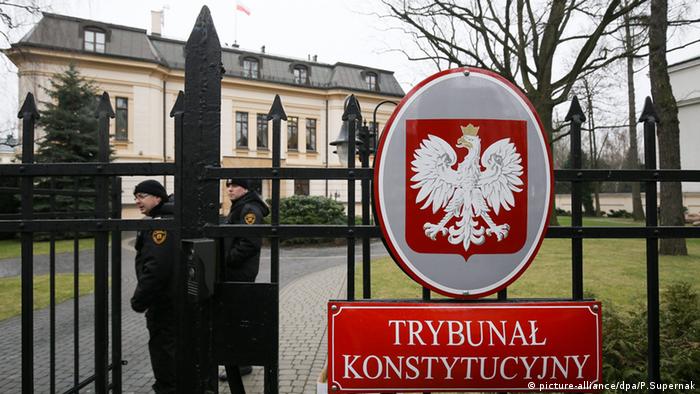 EU parliamentarians in Brussels on Wednesday voted for a resolution demanding that Poland revoke changes to its highest court, the Constitutional Tribunal, which EU officials have claimed are contrary to the bloc's democratic principles.

The resolution by the European Parliament - backed by 510 members and opposed by 160, with 29 abstentions - is not binding, but is a step towards Poland possibly losing its voting rights in the 28-nation bloc.

Critics of the government have said the court is being hampered from acting quickly and reaching valid rulings that could prove a check on the executive branch's power.

The resolution said it was important to remind the Polish government that the European Union "operates on the basis of the presumption of mutual trust that Member States conform with democracy, the rule of law and fundamental rights."

A European human rights body comprising constitutional experts, the Venice Commission, criticized Poland for effectively paralyzing the Constitutional Tribunal. The EU parliament resolution said the solution should address the issue, in a way that reflects a compromise between all parliamentary parties, by October.

The European human rights body has criticized a series of legislative measures led by Warsaw's right-wing government. Germany's finance minister said Europe - and Poland - should remember the "lessons from our past." (15.06.2016)

Since the Law and Justice (PiS) party came to power with an outright parliamentary majority last year, it has repeatedly tried to change the court's operational rules. The PiS claims it has a mandate for reform and that the new measures are necessary for it to carry that out.

Changes to the bench

The court changes include scrapping the previous parliament's nominations for judges in favor of PiS-preferred candidates. President Andrzej Duda, a former member of the PiS, has refused to swear in the three judges who were appointed by the last legislature, but did swear in three candidates nominated by the PiS, despite the court's objections.

Among the other provisions is a requirement that cases be adjudicated by a panel of at least 11 of the court's 15 judges. Meanwhile, the court is being forced to take up cases in chronological order of when the complaints were filed, and a minority of judges would be able to delay any ruling by up to six months.

The government, led by Prime Minister Beate Szydlo, has also refused to publish a number of the court's rulings.