The European Union has given Poland a three-month deadline to reverse changes to its constitutional court. The EU is concerned over alleged democratic breaches made since the government came to power in late 2015. 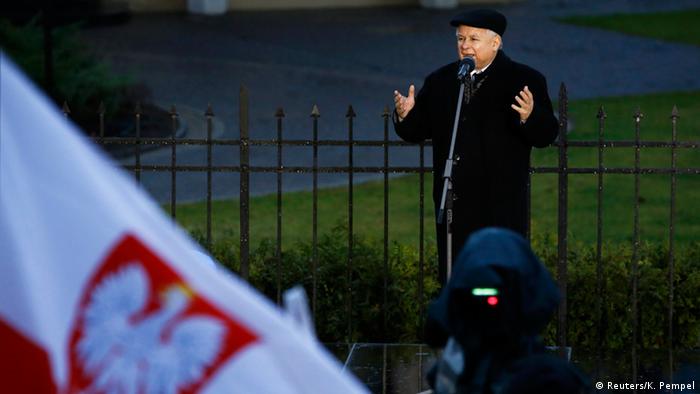 Leader of the Law and Justice (PiS) party, Jaroslaw Kaczynski, the power behind the scenes in Poland

The decision is the second part of an unprecedented procedure triggered by the European Commission earlier this year after Poland's Constitutional Tribunal was seen to have been stymied by the ruling Law and Justice (PiS) government after it came to power last October.

"The fundamental concerns are still unresolved," European Commission Deputy President Frans Timmermans said, adding the court still did not have the full capacity to carry out a constitutional review. "This adversely affects its integrity, stability and proper functioning, which is one of the essential safeguards of the rule of law in Poland," Timmermans continued.

While the potential penalties are unclear, as is the EU's political desire to impose them on a key member of the bloc, Warsaw could see its voting rights suspended in the European council of ministers, the EU's top decision-making body.

The tribunal, which decides whether laws passed by parliament are in line with the constitution, is at the center of an ongoing row that has sparked anti-government protests in Poland and international rebuke from the European Commission and the United States.

A draft law approved on July 22 - designed to appease critics, home and abroad - stipulates that decisions on key issues can be made in the presence of 11 out of 15 judges and the review of compliance of a law with the constitution can be made by five judges. But for many in Poland and abroad this doesn't go far enough and means the court remains hobbled.

The Commission, European Parliament or a group of 10 member states can propose Poland is stripped of its voting rights in EU institutions if it is found guilty of "serious and persistent breaches of the rule of law." 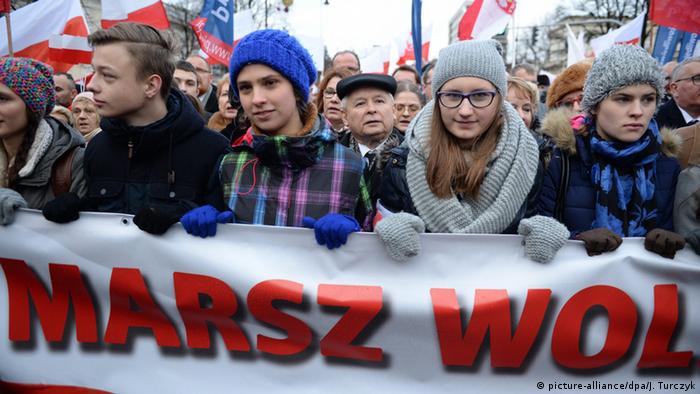 The President of Law and Justice party (PiS) Jaroslaw Kaczynski (C) during the 5th March of Freedom and Solidarity, through the streets of Warsaw in December

In mid-January, the European Commission began a preliminary review of whether the new laws introduced by the Polish government breached the European Union's founding principle on the rule of law.

The Commission launched an initial probe in January to see if the changes violated EU rules and warranted punitive measures. It formally warned Poland on June 1 to reverse the changes so as to remove a "systemic threat" to the rule of law, but said Warsaw had still failed to address the concerns despite further legislative amendments.

"We now invite the Polish authorities to take action to solve these concerns and inform the Commission of the steps taken within three months," Timmermans said.

The Constitutional Tribunal itself recognized the unconstitutionality of new legislation in its March ruling, which the Polish government refused to publish to prevent the court's ruling from being considered legally binding.

Poland's interior minister, Mariusz Blaszczak, said he was "astonished by the European Commission's decision," adding that it "should instead support the member states. They should concentrate on the fight against terrorism."

The head of Poland's Constitutional Tribunal, Andrzej Rzeplinski, has criticized the government over its stance in the ongoing conflict with the European Union. Warsaw and Brussels remain in a standoff. (10.06.2016)

EC Vice President Frans Timmermans has pledged support in finding a solution to Poland's political crisis that is straining ties with Brussels. But on a trip to Warsaw no tangible steps were taken. (24.05.2016)

Rule of law under threat: Poland in the EU pillory

The EU Commission has activated the next stage in its constitutional proceedings against Poland. Warsaw is outraged. What next in the battle over the constitutional court? Bernd Riegert reports. (23.05.2016)