The Polish government has intensified its struggle against the constitutional tribunal: Prosecutors are now going after its president. The war on the judiciary is sure to worsen, writes Rosalia Romaniec. 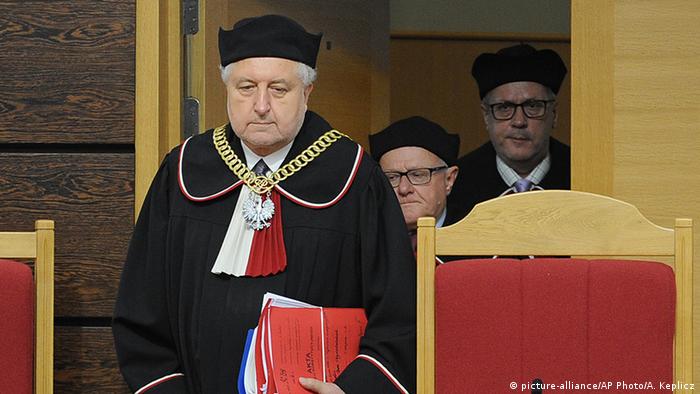 Poles have grown so tired of hearing about the daily woes of their constitutional tribunal, news websites are barely covering the story anymore. And that's even though it's unprecedented: The state prosecutor has targeted the tribunal's president because of, not in spite of, his devotion to the law.

The months-long struggle between the conservative government and the judiciary can be summed up in a single sentence: The court is upholding the law, but its interpretation of the law runs contrary to the government's own idea of justice.

What started out as an embarrassment is now deeply troubling. One gets the sense that Poland could be on the cusp of something truly dangerous. The ultra-conservative Law and Justice (PiS) party has been expanding its authority since coming to power. The legislative and executive branches are now playing for the same team, with the friendly support of Polish state-run media.

Only the judicial branch stands in their way. For the second time it's ruled the government's desired constitutional reforms unlawful - a decision the government has ignored and since announced the implementation of the reforms.

Most of the government's ire is directed at Andrzej Rzeplinski (pictured). The tribunal's president is an unconventional and stubborn thinker who won't compromise on justice. He's just the man for the job of leading the nation's courts.

The state prosecutor's investigation of Rzeplinski is a new round in this power struggle, which began late in 2015. The current government appointed three judges to replace those appointed by the previous government.

The constitutional tribunal declared the move unconstitutional, preventing the judges from taking their seats on the court. One of them filed a complaint against Rzeplinski, arguing abuse of power. The state prosecutor's office, whose head is now the justice minister, began investigating on Thursday.

Whose law and justice?

A European state - the first in Europe to introduce a constitution with separation of powers 225 years ago - is now at risk of undoing its democratic structure. Rzeplinski wants to defend this proud tradition. He called the investigation against him a "clumsy attempt to co-opt the judiciary's independence."

"Pride comes before a fall," responded Zbigniew Ziobro, who is both prosecutor general and justice minister. That hardly sounds like an independent investigation.

Either way, the judge's fight ends in December when his term expires. That makes him something of a Don Quixote character fighting the windmills - windmills of a government that implements "law and justice" as it sees fit.

It's frightening that the PiS won't wait until December, although the judge enjoys immunity, making it difficult to remove him. Some commentators in Poland are asking whether it's really so far-fetched that the state prosecutor will appear at the constitutional tribunal.

The prosecutor's office must be able to imagine the scene: The country's highest judge in his black robes and white-red jabot adorned with the silver eagle, his head held high, would leave the courtroom accompanied by the prosecutor.

This symbolic image of the destruction of the rule of law is not something even the most wrathful government should want to project. Especially when the events of the next few months are clear: Rzeplinski will soon be gone, but the windmills will continue to turn and grind away at the democratic state.

The flood of refugees coming to the EU through the Belarus city of Brest is growing. One can see them in trains between Belarus and Poland every day. Where are these people coming from, and what are they looking for? (10.08.2016)

Poland has preliminarily approved a law making it a jailable offense to use the phrase "Polish death camps" for sites run by Nazi Germany in Poland during WWII. The distinction is real but very difficult to enforce. (17.08.2016)

Kuwaiti government steps down 3h ago